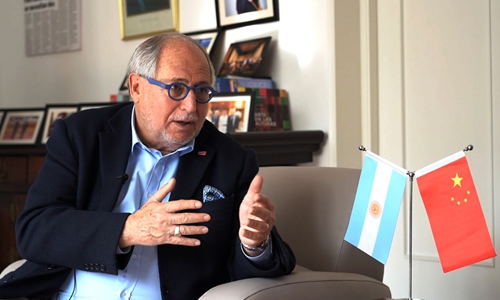 Recent years have seen China and Argentina advancing bilateral relations and deepening cooperation in a range of fields. While geographically apart, the two countries have seen closer ties despite pressure from the US. How does Argentina evaluate China's presence in the country and the Latin American region? What are the new areas in which the two countries can enhance cooperation? Global Times reporter Xie Wenting (GT) talked with Argentine Ambassador to China Diego Ramiro Guelar (Guelar) on these issues in an exclusive interview.

GT: US Secretary of State Mike Pompeo warned Latin American nations against accepting Chinese investment, saying that "when China calls, it's not always to the good of your citizens." What's your take on that statement and how do you evaluate the presence of China in Argentina and the region?

Guelar: The presence of China is increasingly happening and without any doubt, this is a win-win situation for Latin American countries.

China is not a threat. Its presence has been evaluated in a very positive way in all the countries in the region including Argentina. There is no hesitation in considering that the development of strong and healthy relations with China is beneficial to our people.

China is a great nation and we feel very proud about our strategic association and partnership.

As a sovereign country, we can't accept any pressure from other countries regarding our foreign relationships. We never received that kind of pressure from China and we expect the same from other foreign powers. I think that's maybe the reason why we feel so comfortable with our Chinese partners and friends. I know that the new Argentine administration is going to keep and strengthen our good relationship with China.

GT: What kinds of Chinese investments does your country need most? What are the new areas for cooperation?

Guelar: We have a priority, for both sides, regarding energy and transportation. There is also a shared priority in the agro-industry and the cultural industry in terms of investment. The Chinese companies are investing heavily in Argentina, and nowadays they are major exporters of grain from Argentina to the world. But the most important priority goes to the mining industry.

Besides, in 5G industry, we are working with Huawei very closely. And I think that it's going to keep developing in a very important way. Currently, we're starting with Huawei the application of 5G in Argentina.

GT: Argentina is experiencing an economic slowdown. What will your country do to boost the confidence of Chinese investors? How can you guarantee the repayment of Chinese loans?

Guelar: Argentina is a wealthy country with some short-term financial issues. We are having in this moment a serious industrial recession. This is a delicate conjuncture, but we have a very strong support from our partners in the world, starting from China. We assure now that we are going to overcome these problems, as we did in the past. Argentina is basically a rich country in human and natural resources.

I consider that our problems are circumstantial and will be overcome in a short period of time. There is no doubt that the new administration faces a tough negotiation about our foreign debt, but we have the guarantees. We are wealthy enough to guarantee that with certain reprogramming of the debt, we are going to honor our international promises.

GT: How do you view the similarities and differences between Hong Kong and Malvinas?

Guelar: Well, both China and Argentina are countries that are deeply committed to putting an end to the last remains of colonialism in the contemporary world.

We have systematically called the UK to restart bilateral negotiations regarding Malvinas Islands' sovereignty to find a peaceful solution to the dispute. The international community has supported this position through several UN General Assembly Resolutions, namely UNGA 2065 Resolution in 1965. We are very thankful to the Chinese government for the support given to Argentina regarding to its sovereign rights in the question of Malvinas Islands.

The UK has been occupying the Malvinas Islands since 1833, as it used to do in Hong Kong. We hope that we are going to reach an agreement, and finally the islands are going to come back to the Argentina's sovereignty. For us, Malvinas is a very important part of Argentine territory and policy.

GT: A number of Chinese people, many of whom came from East China's Fujian Province, were smuggled to Argentina in the past. Is the number of illegal immigrants from China dropping in recent years? Will Argentina consider relaxing its visa restrictions on Chinese people?

Guelar: In the last four or three decades, we have had a strong current of migrants from Fujian Province arriving to Argentina, and they soon became a part of our community as other immigrants did in the past.

Some of them took the Argentinean nationality, others remain as Chinese citizens. Some of them arrived by the right means and ways, others didn't. We are now working with Chinese authorities in a very positive way to resolve the past irregular immigration issues. The number of illegal immigrants has dropped dramatically. I really think that this issue is becoming less and less important.

Regarding visa issues, we have now ten-year visas for Chinese tourists and entrepreneurs. We have to plan within the next ten years to eliminate the visa restrictions on Chinese tourists.

GT: How do you evaluate the contributions Chinese community has made to Argentina?

Guelar: It is very important and is very highly appreciated. You have two perceptions in Argentina about the Chinese community. One is related to the origins of Fujian community that has developed in an extraordinary way. We have around 11,000 supermarkets that usually belong to Chinese families. People in general have a priority of going to the Chinese supermarkets, because they have very good prices. This is the traditional perception.

In recent years, we have added a new "layer" to our perception of Chinese community in Argentina. And it is related to the increasing presence of Chinese banks and companies. ICBC is one of the three major banks in Argentina and the Bank of China is arriving soon. You can also find the new Chinese big companies in areas such as construction, energy and agro-businesses. Then there is a new perception of China as a world power with powerful and wealthy companies. This is a very new perception.

The old vision was already a positive one, but the new one regarding our bilateral relations and the importance of China in major infrastructure projects is even better.

Guelar: I believe you can define three different stages in China's development along the last 70 years: The first stage comprises the first 30 years of the People's Republic while the second one is the one given by the forty years of the reform and opening-up. Now, we are entering a new era determined by the maturing of Chinese economy and its increasing presence, which influences all over the world. I think this is a very positive influence because the existence of China contributes to making a more balanced world. The accession of China to the top of the world arena has been really peculiar given that it is the first super power that arrived to this status not because of military power, war or conquest, but by peaceful means. China is a very active actor in international cooperation and these are very good news for the world.

I have made more than ten trips to China before I arrived as the Ambassador. I've seen the changes happening every day, which is amazing. I have been traveling to many cities and provinces and I see that China makes a great effort to develop all its territory. It is not just as it was at the beginning of the development of industry with a few coastal developed areas. Now there is a better developed society and country. The whole new China is what impresses us the most.