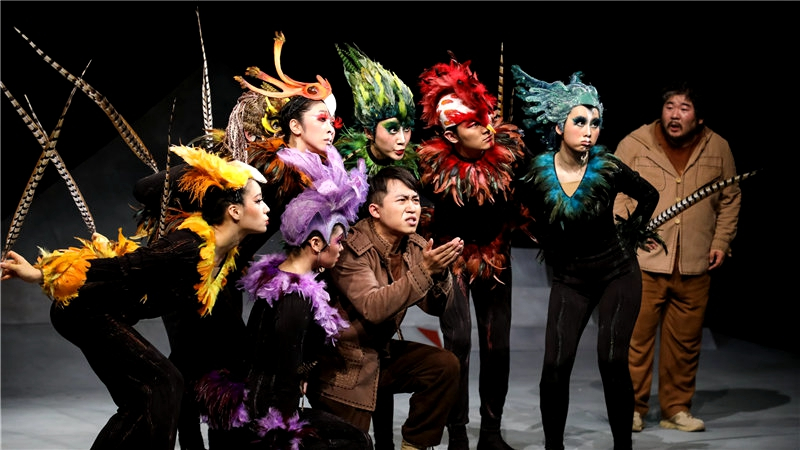 Ten years after Aristophanes' comedy "The Birds" was first staged at the National Center for Performing Arts (NCPA) in Beijing, audiences will be able to experience a new rendition – one that blends Greek drama with Chinese culture.

Written by Aristophanes, the ancient Greek "Father of Comedy," and first performed in 414 BCE, "The Birds" is the only ancient comedy still with us that contains mythological themes, and by far the most fanciful. The play revolves around the establishment of a bird kingdom in the sky, cleverly weaving together myths and legends related to birds.

The plot forms an organic whole that is well-rounded, and imaginative. It not only criticized the faults of the contemporary society of its time, but also relates an ardent wish for the creation of a more ideal world.

This April saw the premiere of the Chinese version of "The Birds." Less than half a year later, it's being staged again after being revised by director and theater educator Luo Jinlin, and cross-cultural researcher, Luo Tong. The father-daughter team has been working on ancient Greek theater studies for many years.

"This is the second ancient Greek comedy that I direct because comedy is much more difficult to direct than tragedy. 'The Birds' is Aristophanes' most popular play. He borrowed a myth and created a utopia of birds to express his dissatisfaction of society and the political environment. In my production, I want to tell the audiences that ideal is very hard to make true, but diligence is the way to realize it, " said Luo Jinlin, co-director of "The Birds."

Ancient Greek culture researcher Luo Tong has re-translated and localized the language of the comedy. Not only does she annotate ancient Greek mythical allusions and slang in the original, but also translates the poetic lines into modern oral Chinese.

"In ancient times, people did divination through birdsong. Birds were regarded as the gods' messengers to humans. Birds are a part of the natural world. In this comedy, human and birds start with hostility and finally reach a mutual understanding. The whole world becomes better when nature and human society reach harmony. I think that is why the play is still worth showing today, " said Luo Tong.

The Birds is the 80th play produced by the NCPA, and the only ancient Greek play to have taken the stage to date.