CHINA Arrest of 7 political figures to clean up mess at HK LegCo: expert

Arrest of 7 political figures to clean up mess at HK LegCo: expert 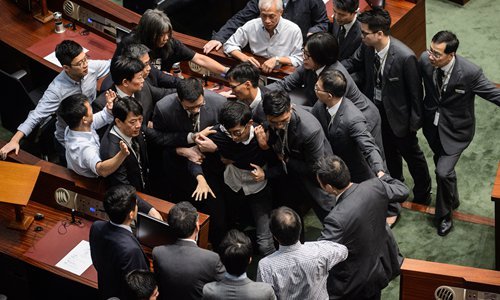 Seven Hong Kong politicians including current and former members of the Hong Kong Legislative Council (LegCo) were arrested on Sunday for contempt and interference with members of the LegCo. The arrest is a positive signal that Hong Kong is cleaning up the long-existing mess in the LegCo and eliminating ill-intentioned political performances, experts noted.

The Hong Kong Police Force (HKPF) confirmed to the Global Times the arrest of seven politicians aged 33 to 63 on suspicion of contempt and interference with LegCo officers, saying the arrests are still in progress and that further arrests are "not ruled out."

"The long-existing problem with the Hong Kong LegCo is that it has become a venue for political performances by some of its members, while it is nearly paralyzed in terms of political deliberation," Li Xiaobing, an expert on Hong Kong, Macao and Taiwan affairs from Nankai University in Tianjin, told the Global Times on Sunday, "Today's arrest sounds a warning shot to these opposition activists who are used to putting on a show that Hong Kong is going to fix LegCo."

All seven arrested political figures were connected to a chaotic LegCo meeting on May 8, 2020, which police officers have been investigating since receiving a report the same day.

On May 8, the LegCo meeting descended into turmoil as a few opposition activists including Chu and Chan caused scenes of rioting at the meeting and even attempted to attack other lawmakers. Despite warnings from LegCo leader Starry Lee Wai-king that obstructing LegCo meetings could be in breach of the law, the troublemaking lawmakers repeatedly prevented the meeting from proceeding until they were thrown out by Lee.

"Hong Kong is using its existing legal means to investigate the filibustering of some LegCo members to eradicate this kind of political show, which has long been harming the public interest," noted Tang Fei, a member of the Chinese Association of Hong Kong and Macao Studies.

"The arrest of these lawmakers does not mean that opposing voices will not be accepted in the future, as HK society has always been known for its diversity, but rather to emphasize the need to take the responsibility of legislating seriously," Li Xiaobing said.

"But it's ultimately up to Hong Kong's judicial system," Tang noted, "It does not seem too optimistic, as seven rioters were just acquitted of criminal charges by a Hong Kong judge on Saturday."

Lau Siu-kai, vice-president of the Chinese Association of Hong Kong and Macao Studies, who is also former principal adviser of the Central Policy Unit of the HKSAR government, believes that the LegCo will further strengthen its internal discipline.

"Those members who do not abide by the rules will be dealt with as they deserve, so that the LegCo does not have to rely too much on external forces to maintain internal order for itself," Lau said.