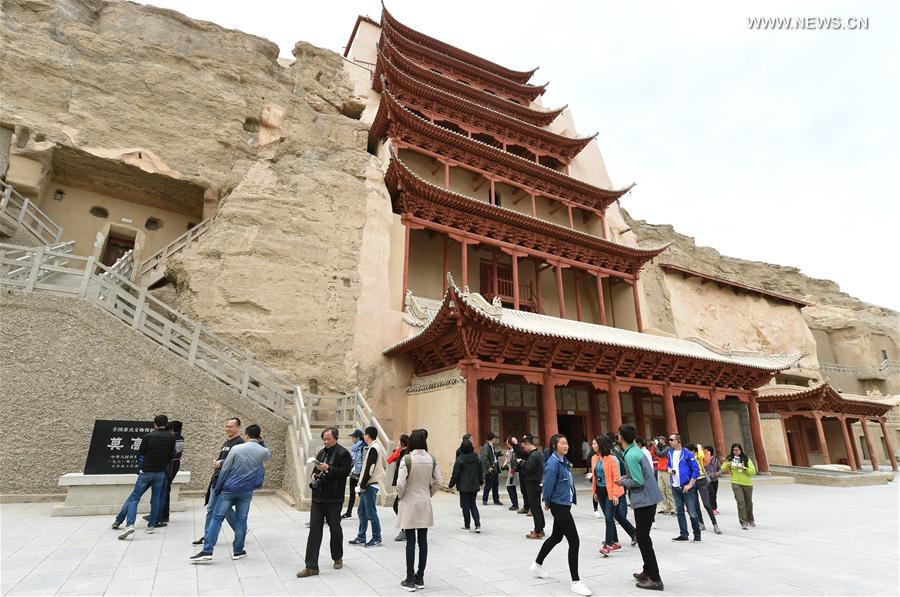 Inspired by Dunhuang, an ancient Chinese city on the Silk Road that witnessed a cavalcade of great cultures and ideas for more than a millennium, a Stanford art professor aims to make history speak to a contemporary audience.

Prof Xiaoze Xie recently presented his work-in-progress inspired by an artist in residence stint last summer at the Mogao Grottoes in Dunhuang.

Sponsored by the Dunhuang Foundation, Xie spent 25 days at the site, focusing on Cave 17, which is also known as "the Library Cave".

He produced a long scroll of brush and ink sketches combined with diagrams, calligraphy and copied images.

The scroll is a framework for the final work which will be a series of sculptures he will realize in the future, said Xie. He has named the project "Amber of History", taking inspiration from an amber fossil with an insect trapped inside.

More than 1,000 years ago, in the tiny oasis town of Dunhuang in northwestern China, 492 cave temples were carved into a giant cliff face and decorated with Buddhist murals and sculptures, known as Mogao Grottoes or the Caves of the Thousand Buddhas.

The Library Cave was once a depository of manuscripts, scrolls, paintings and textiles dating from the 4th to the 11th century. But relics from the cave were bought and sold, stolen and fragmented since the cave was discovered in 1900, and are now dispersed in collections around the world.

In his work, Xie let his imagination explore the now empty cave and created several versions of the cave's "original order" in its original space.

One version — an analysis of the materials found in the cave — is called "the texture of civilization".

The majority of objects in the cave were handwritten scrolls of Buddhist sutras and other documents, said Xie. About 62 percent of the materials were silk, 14 percent linen, and 24 percent paper.

"I imagine all the objects lose their forms, and these materials melt and separate to become layers of sediment," said Xie.

The layers of materials settle horizontally in different colors, which come from the artist's imagination based on the typical color combination of the Buddhist murals.

Another version, "symphony of language", has the popular characters found in the sutras floating in space in a transparent cast.

"The characters vary in different shades of black — the shades are increasingly dense at the bottom until they become solid black," he explained.

"Everything is only on paper now," said Xie. "It's a huge challenge for me to tackle the subject."

He said he will visit the site again later this year and finish the scroll drawings with more imaginary versions, while creating a series of miniature models for the sculptures and testing different ways to present the drawings.

His ambition is to make something that is meaningful to represent China's culture and history, said Xie.

The artist in residence program that sponsored Xie was created as a way for people to have a contemporary dialogue with Dunhuang and China's past, said Christian Hudak, executive director of the Dunhuang Foundation, which is based in San Francisco.

"If you know nothing about Buddhist art, you have no way of contextualizing what you see in Dunhuang. So we thought by engaging contemporary artists today, it would give the American audience a starting point of conversation," Hudak explained.