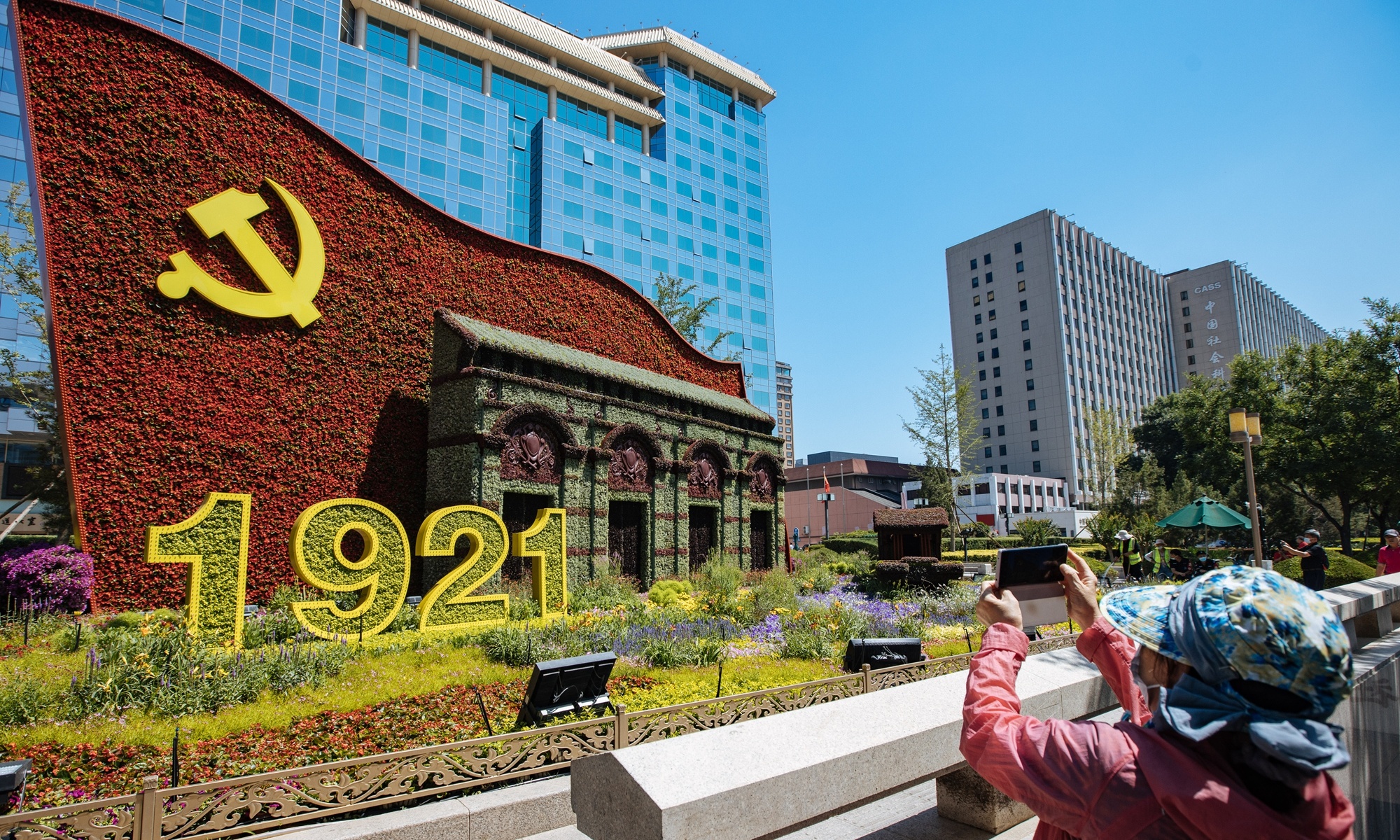 A visitor takes a photo of a floral decoration that has been put up along the Chang'an Avenue in Beijing to celebrate the 100th anniversary of the founding of the Communist Party of China (CPC) on Monday. (Photo: GT)

The Communist Party of China (CPC) has received more than 1,300 congratulatory letters from foreign political parties and state leaders over the CPC's upcoming 100th founding anniversary, said an official from the International Department of the CPC Central Committee. In those letters, parties and state leaders expressed their expectations for the CPC, including hopes to share its governance experience and lead international society in dealing with current challenges, such as climate change and imbalanced development.

Among those who offered their congratulations, 150 are state leaders and head of governments, and 200 are leaders of political parties, said Guo Yezhou, vice minister of the International Department of the Central Committee of the Communist Party of China, at a Monday conference.

Guo also said some state leaders, and political parties' leaders wrote to Chinese President Xi Jinping, also general secretary of the CPC Central Committee, to express their feelings. Political parties in certain countries have overcome divergences, held meetings together and signed the congratulatory letters together, which highlighted their friendliness to China.

Guo also said that some political parties have combined party theoretical study together with congratulating the CPC on its centenary anniversary, and that they presented the congratulatory letter as a fruit of the theoretical discussion, which is of both "warmth and depth," said Guo.

Guo pointed out that the CPC's centennial is of great importance. Not only that it's a grand ceremony for the Party and Chinese people, it's also of interest to the international community. One can see from those congratulatory letters and during interaction between CPC and foreign political parties that they are paying high attention on the CPC.

The official also listed five characteristics of the CPC in the eyes of foreign politicians, namely theoretical innovation; people-centered; keep on self-construction to keep vitality; strong leadership; and global vision.

From those congratulatory letters, those political parties and state leaders also expressed their expectations for the CPC at its new starting point. They are looking forward and believe that the CPC can lead Chinese people to weather all sorts of risks and challenges, to achieve the goals in the next centenary, said Guo.

Those party and state leaders said they hope the CPC can share its valuable experience in governing the Party, as well as the country. They also expect the CPC to provide "public goods of thoughts," lead international society in dealing with various global challenges including security issues, climate change and imbalanced development, as well as to contributing more in building a peaceful, safe and prosperous world.