Hu Yang, a university freshman from Beijing, was standing at the starting line of an advanced skiing piste in Wanlong Ski Resort in Chongli, North China's Hebei Province. Although he had skied the run four or five times before, the moment he set off this time, he felt something was different.

His snowboard was shaking, a sign of reckless speeding. Before he could slow himself, he fell and started tumbling down the slope, his head, neck and back hitting the ground. After another skier called the ambulance, Hu was sent to the hospital and diagnosed with eight broken bones and severe spinal damage.

Hu is not the only Chinese skier who had a bad luck the moment he hit the slopes last winter. Two days after his accident, a female postgraduate student from Peking University was killed at Wanlong Ski Resort after hitting a tree.

And another two days later, at Thaiwoo Ski Resort, which is 35 kilometers from Wanlong, a 10-year-old boy fell off an intermediate slope and was pronounced dead on arrival at the hospital. A 9-year-old girl also died after her hair and arm were ripped off by a magic carpet (a moving belt which pulls the passengers uphill) at a ski resort in Shandong Province.

There are no official statistics on the number of people in China who are injured or even killed when skiing every winter. Academic research on the topic is outdated, but the most recent study by Zhu Donghua, a sports professor from Shenyang University of Technology, of 70 ski resorts in China showed that fatalities rose from just five in 2008 to 26 in 2011.

But there is little doubt that the number of skiing-related casualties and injuries are on the rise in China as the country embraces the sport in preparation for the 2022 Winter Olympics. Boosted by the growing demand for winter sports among China's expanding middle class along with support from the central government, China is literally leaping into skiing.

This has prompted hundreds of real estate developers and ski resort operators to also take the plunge. In 1996, there were only nine ski resorts and less than 1,000 skiers in China. According to the China Ski Industry White Book, by 2016 the number of ski resorts rose to 646, which was 78 more than the year before. Chinese ski resorts handled 15.1 million skiers in 2016, a 20.8 percent year-on-year increase. 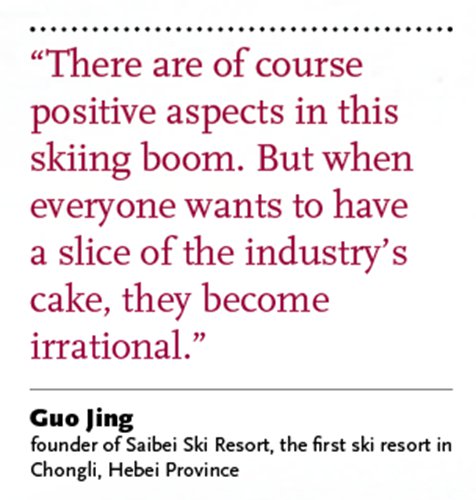 Keeping up with demand

Wei Gaihua, vice manager of a ski resort-planning company under the Beijing Carving Ski Group, said that when it was founded in 2013, the company provided consulting services for about 200 ski resorts each year. Now that number has doubled. "The business volume is rising so fast we can barely take it," he told China Newsweek.

With the Winter Olympics set to be held in 2022, there is no sign that China's skiing explosion will end any time soon. The latest addition to China's growing number of ski resorts is Tianhu Ski Resort in Guilin, Southwest China's Guangxi Zhuang Autonomous Region, which opened this month. In Tibet, authorities are planning the highest ski resort in China in terms of altitude, according to reports.

"There are of course positive aspects in this skiing boom. But when everyone wants to have a slice of the industry's cake, they become irrational," Guo Jing, founder of Saibei Ski Resort, Chongli's first ski resort, told China Newsweek.

Many Chinese real estate developers, for example, skipped the planning and research phase and went directly to construction, only realizing later that their resort just wasn't suitable for snow due to climate reasons.

Some cities even went as far as cutting through hills to create ski slopes, damaging the local environment. In February of 2017, after a slope at a ski resort in Xingtai, Hebei Province, collapsed and injured five people, investigations showed that the slope was actually constructed of scaffolding, covered only with a thin layer of snow.

Hu feels lucky that he was less than one meter away from falling off a slope. If he had been going any faster, he could have fallen about eight meters, which almost certainly would have led to death.

But not everyone is as lucky, including the 10-year-old boy who fell off the slope in Thaiwoo Ski Resort and died. His father later wrote that the ski resort failed to install safety nets along the slope, leading to his son's death.

Whether safety nets should be installed at ski resorts has been a matter of debate in China. "Safety nets are not standard practice at high-end ski resorts abroad. In the US for example, ski resorts are on real mountains, so it is impossible to fence those slopes," said Liu Renhui, an expert of winter sports at Shenyang Sport University.

Wu Bin, head of the Carving Ski Group and a ski lover, also finds it unnecessary to install too many safety nets. "In large ski resorts in Chongli like Wanlong and the Dolomini Mountain Resort, safety nets really spoil the scenery. Trees are natural barriers, and safety nets ruin the sport's affinity for nature," he said.

But the reality in China, where novice skiers and first-timers still make up the majority of people on the slopes, is that safety nets are almost a necessity, as well as other adaptations on slope design. "Intermediate runs in China are usually equivalent to beginner runs abroad," Wei said. Other adaptations include enlarging the area for skiers to slow down.

Safety and rescue services at Chinese ski resorts are also lagging behind their foreign counterparts. Liu said that when he led a group of skiers training in Hintertux, Austria, a skier crashed into an instructor and both were stranded. In less than 20 minutes, however, rescuers in a patrolling helicopter spotted them; they were soon sent to a local hospital.

While patrol and rescue teams are mandatory for Chinese ski resorts, there still lacks a universal standard for their work. In the Thaiwoo accident, where the 10-year-old boy died, his father complained that the rescue team might have inflicted secondary damage on the child as they moved him onto an inflated bed. According to a surveillance video, the child was still alive when he was spotted by the rescue team, but died after he was sent to the ambulance.

Experts say China ought to introduce other methods to track the safety of local skiers. In North America and Europe, more and more ski resorts are using RFID technology to improve client experiences and keep track of their skiers' safety, which makes search and rescue efforts easier.

Apart from the lack of safety measures, the ever-growing number of beginners, who lack safety awareness, has also made skiing a more dangerous sport in China than in other countries.

"If you want to drive, you need to study the traffic rules first. But everyone can just go skiing at ski resorts. It's like allowing those who can't drive to suddenly hit the road," Liu said.

However, Chinese ski instructors are often neglected. Ski coaches in China must obtain a qualification issued by the country's Ministry of Human Resources and General Administration of Sport, which allows them to work for ski resorts.

But they do not have to be an expert to pass the test and receive a certificate. All it takes is a few days of lessons. As a result, many coaches are far from capable teachers. It is not uncommon to see a coach do nothing other than push and pull his student, or simply offer a helping hand when a learner loses balance and falls to the ground.

Zhang Yan, the founder of Magic Ski School, once conducted a survey at several ski resorts on the outskirts of Beijing, finding that only 10 percent of local skiers were willing to pay for an instructor. "Most people think it's too expensive and that they won't learn much from those coaches," Zhang told China Newsweek.

Unlike Switzerland and Canada, where ski season sometimes lasts as long as half a year, even in northern Chinese cities, the season is much shorter, usually lasting only three months throughout the winter.

Zhang Litao, general manager of Beijing Fulong Ski Resort, said most ski schools are affiliated with or directly run by ski resorts. When snow season ends in March, instructors simply terminate their contracts and return home, leaving the resorts to recruit new instructors the following year. This results in uncertainties in the quality of Chinese ski coaching.

Authorities are now paying closer attention to instructors' teaching standards and their level of expertise. According to Li Xiaoming, chairman of the Beijing Ski Association, the organization's main work over the past year has been to push forward a training and rating system for ski instructors. New standards will soon be issued.

Some ski resorts have also been attempting to offer stable, year-round work to their instructors. Magic Ski School, for example, is training its instructors to also teach outdoor survival skills and sailing skills so that they can teach something else after the ski season ends. "This will help resorts retain their coaches," Zhang said.