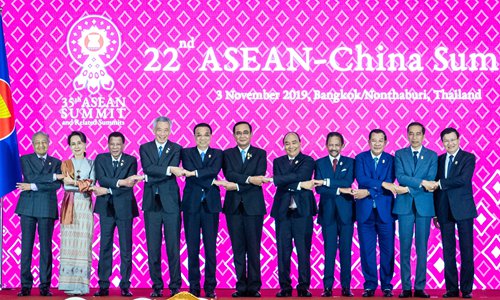 Whether a momentous free trade pact can be finalized has attracted considerable media attention at the 35th Association of Southeast Asian Nations (ASEAN) Summit, being held in Bangkok, Thailand starting on Sunday.

Summit host Thailand expressed optimism for the Regional Comprehensive Economic Partnership (RCEP), as Thailand's Deputy Prime Minister and Commerce Minister Jurin Laksanawisit were quoted in The Bangkok Post as saying "participants of the RCEP hope to finalize talks on the 16-nation pact" on Friday.

Japan-based Kyodo News quoted a source on Saturday, saying that the 16 countries' leaders are likely to sign an RCEP agreement in a joint statement to be released after their scheduled summit on Monday.

China has expressed constant support for the RCEP, a proposed free trade agreement (FTA) between 10 ASEAN members and ASEAN FTA partners China, Japan, India, South Korea, Australia and New Zealand. Chinese analysts say such a partnership sets an example for multilateralism and hits back effectively at US protectionism.

They note that if the RCEP is successfully finalized, it will cover 3.5 billion people, or almost half the world's population, and will become the biggest free trade pact in the world.

With 15 countries ready to proceed with the free trade pact, India reportedly remains the last holdout.

Chinese analysts pointed out that there have been domestic concerns in India that once the RCEP is signed, the country may be flooded with cheap Chinese imports.

"India's concerns are understandable because Chinese goods are highly competitive with their high quality and low prices," Long Xingchun, director of the Center for Indian Studies at China West Normal University, told the Global Times on Sunday.

"If India still refuses to sign an agreement, then the other 15 participants can reach a deal first and India can wait until it thinks the conditions are acceptable," Long noted.

"The RCEP will promote industrial transfer and investment among the 16 countries," Long said. "By promoting production and foreign investment and developing manufacturing in India, India's trade deficit with China could be reduced."

India's trade deficit with China in the first six months in 2019 decreased 13.5 percent year-on-year to $25.3 billion, according to data from China's Ministry of Commerce.

"Among the 16 RCEP participants, Thailand, the Philippines and Indonesia have shown their tendency to join the Comprehensive and Progressive Agreement for Trans-Pacific Partnership," Huo Jianguo, vice chairman of the China Society for World Trade Organization Studies, told the Global Times on Sunday at a panel discussion during the Sixth Edition of China Inbound-Outbound Forum held in Beijing.

"If the 16 participants can reach a framework agreement first and not be a hurry to resolve all the remaining problems, then there may be a breakthrough."

"If major countries are not willing to shoulder such a responsibility, the world will be in chaos, which harms global economic development and prosperity," Huo said.

Chinese analysts told the Global Times Sunday that against the backdrop of US trade barriers, the RCEP if finalized, can help participants jointly oppose US unilateralism and protectionism by injecting positive energy into the regional and world economies.

US protectionism has become a concern for many Southeast Asian countries.

Malaysian Prime Minister Mahathir Mohamad on Saturday called these countries to speak with "one voice" to protect their own interests when facing the US protectionism, saying that "if you go it alone, you will be bullied."

"We don't want to go into a trade war. But sometimes when they are unnice to us, we have to be unnice to them," Mahathir said on the sidelines of the ASEAN summit on Saturday.

"If the person is not there, maybe there will be a change," Mahathir said in a reference to US President Donald Trump.

RCEP would be a blow to US unilateralism which is swimming against the tide of globalization, Xu Liping, director of the Center for Southeast Asian Studies at the Chinese Academy of Social Sciences, told the Global Times on Sunday. "The RCEP will be an example for multilateralism and free trade in the world," Xu said.