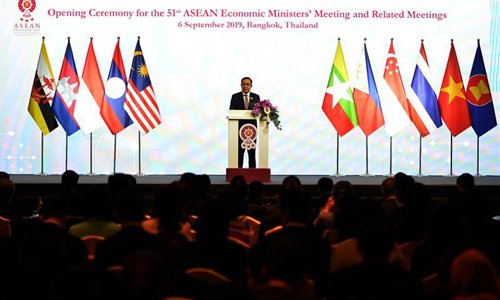 The Association of Southeast Asian Nations (ASEAN) has made major achievements in regional integration and community building in the past four years, a Philippine high-level official said on Saturday, stressing the importance of China's role in helping build the ASEAN community.
ASEAN, founded in 1967, announced the establishment of the ASEAN Community in December 2015 and the integration is gaining momentum in recent years.
ASEAN "is fast becoming an economic powerhouse," Martin Andanar, secretary of the Philippine Presidential Communications Operations Office (PCOO), told Xinhua in an interview, adding that the Philippines and Vietnam are the two of the fast-growing economies in the Asia-Pacific region.
"Connectivity inside ASEAN is advancing as capital, talents and ideas are flowing easily among ASEAN countries," Andanar said.
He also noted that "ASEAN maintains a stable relationship with major countries in the world like China, the United States, Russia and Japan."
Regarding China's role in supporting ASEAN, Andanar said China is one of ASEAN's "most important and dynamic dialogue partners," and that China-ASEAN relationship is beneficial to both sides, especially in the economic and infrastructure areas.
"China supports ASEAN-dominated RCEP (the Regional Comprehensive Economic Partnership) negotiations and also promotes infrastructure cooperation with many ASEAN counties like the Philippines," he said.
RCEP is a proposed free trade agreement (FTA) between the 10-member states of ASEAN and its six FTA partners, namely China, Japan, India, South Korea, Australia and New Zealand.
ASEAN groups Brunei, Cambodia, Indonesia, Laos, Malaysia, Myanmar, the Philippines, Singapore, Thailand and Vietnam.
Moreover, the Philippine official noted that China also signed a China-ASEAN Strategic Partnership Vision 2030 with ASEAN in which China and ASEAN both commit to fostering friendly relations, mutually beneficial cooperation and good neighbourliness between the two sides.
Andanar expressed optimism that the good relations between China and ASEAN will continue in the years to come, especially in the economic and people-to-people exchange areas.
"In the future, China and ASEAN have a huge potential for cooperation in people-to-people exchanges," he said.
After the full implementation of the upgraded protocol of the China-ASEAN Free Trade Agreement and the conclusion of negotiations on RCEP, Andanar said "Greater progress will be made in economic and trade cooperation" in the Asia and Pacific region.
The 35th ASEAN Summit and Related Summits will be held in Bangkok, Thailand early next month.