China's rural revitalization program has provided an innovative and effective model for its rural population in achieving common prosperity, diplomats from Asian countries said after they paid a visit to a village in Ningbo, East China's Zhejiang province. 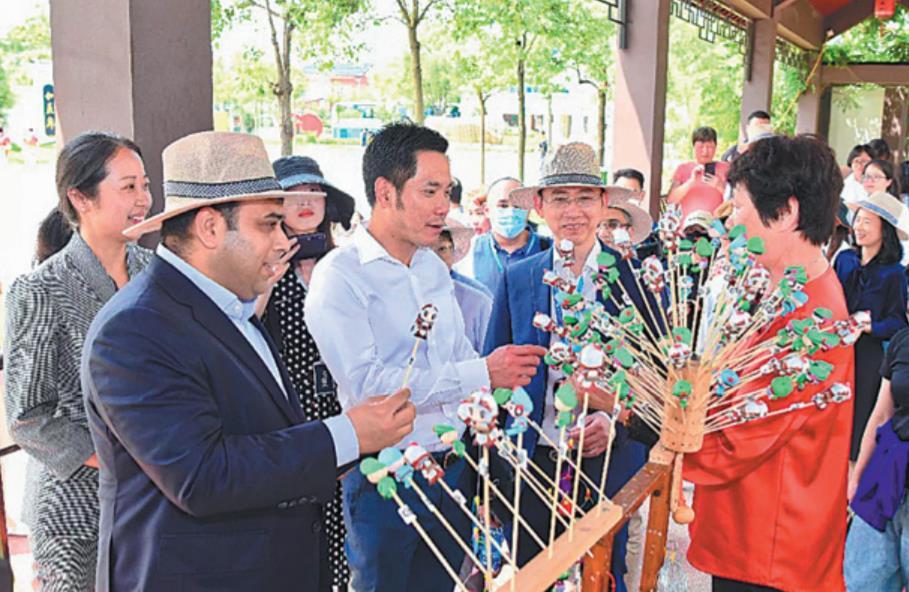 Consular officials visit the village of Fujialu in Ningbo, Zhejiang province, in May. (Photo: China Daily)

The delegation consisted of 31 consular officials from 15 Asian countries in Shanghai which included Vietnam, Indonesia and Turkey. They visited the village of Fujialu in Ningbo at the end of May, witnessing the tremendous change the rural revitalization program has brought to the village over the past five years.

The village, located in the west of Chongshou town in the city of Cixi, was merged from four smaller villages into one in 2000. With a population of nearly 10,000, the village has been committed to promoting rural revitalization and was listed as one of the national models for rural governance in 2019.

Hu Yi, a resident of the village, suggested in 2014 that e-commerce be introduced and developed for the local agricultural product processors to tap a broader market. It was put into practice after several rounds of discussion between the villagers.

Within a year, many farmers were engaged in e-commerce. This helped the economy develop and attract young people to go back to their home village to run their own startups.

With the emergence of livestreaming, a studio was launched in the village for those seeking a new business model.

Ninh Thanh Cong, the consul general of Vietnam in Shanghai, said after visiting the e-commerce center that as an example of China's rural revitalization, Fujialu's operation of a collective economy "has been inspiring".

"The government has done a great job to transform the rural area into a developed area," said Lada Phumas, consul general of Thailand in Shanghai.

Fujialu has invested more than 13 million yuan in infrastructure such as roads, parks and outdoor fitness facilities to benefit the villagers and promote the tourism industry. The local people are enjoying a comfortable life there as a result. The area has also become a popular destination for visitors and expats in Ningbo.

Huseyin Emre Engin, consul general of Turkey in Shanghai, said measures the local village authorities have taken are innovative. The have effectively transformed the once poverty-stricken village into a beautiful and comfortable place for people to live in.

Yu Ying contributed to the story.