CHINA Asking China to participate in the 'trilateral arms control negotiation' is unfair, unreasonable and infeasible

Asking China to participate in the 'trilateral arms control negotiation' is unfair, unreasonable and infeasible 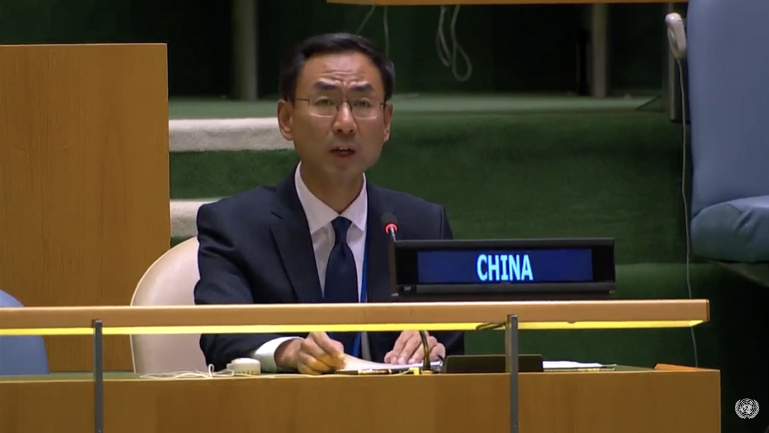 New York (People's Daily) - On October 12, Geng Shuang, Head of the Chinese Delegation and Deputy Permanent Representative of China to the UN, made a statement during the general debate of the First Committee of the 75th Session of the UN General Assembly. He rejected the so-called “trilateral arms control negotiation” recently hyped up by the US.

Geng pointed out that recently the US named China as “the third largest nuclear power on earth”, hyped up “nuclear arms race between the US, Russia and China” and proposed the so-called “trilateral arms control negotiation”. This is just a trick to shift the focus of the international community. The US’ intention is to find an excuse to shirk its own special and primary responsibility for nuclear disarmament, and seek a pretext to free its hands and gain absolute military supremacy.

Geng said that China has pursued a nuclear strategy of self-defense, always kept its nuclear capabilities at the minimum level required for its national security, and has never and will never take part in any nuclear arms race with any other country. Given the huge gap between the nuclear arsenals of China and those of the US and the Russian Federation, it is unfair, unreasonable and infeasible to expect China to join in any trilateral arms control negotiation. China will never participate in such a negotiation and will never accept any coercion or blackmail.

Geng emphasized that China’s rejection of the so-called “trilateral arms control negotiation” does not mean that China evades its own responsibility for nuclear disarmament or refuses to participate in the global nuclear disarmament process. Ever since the first day of possessing nuclear weapons, China has been advocating the complete prohibition and thorough destruction of nuclear weapons. China has declared the policy of no-first-use of nuclear weapons at any time and under any circumstances, and unconditionally commits itself not to use or threaten to use nuclear weapons against Non-Nuclear-Weapon States or Nuclear-Weapon-Free Zones. China is the only P5 country who has made such commitments. China is ready to engage in meaningful dialogue on the issues related to strategic stability with all parties on the basis of mutual respect, and will continue its participation in the arms control process under the framework of the United Nations, the Conference on Disarmament and the P5.