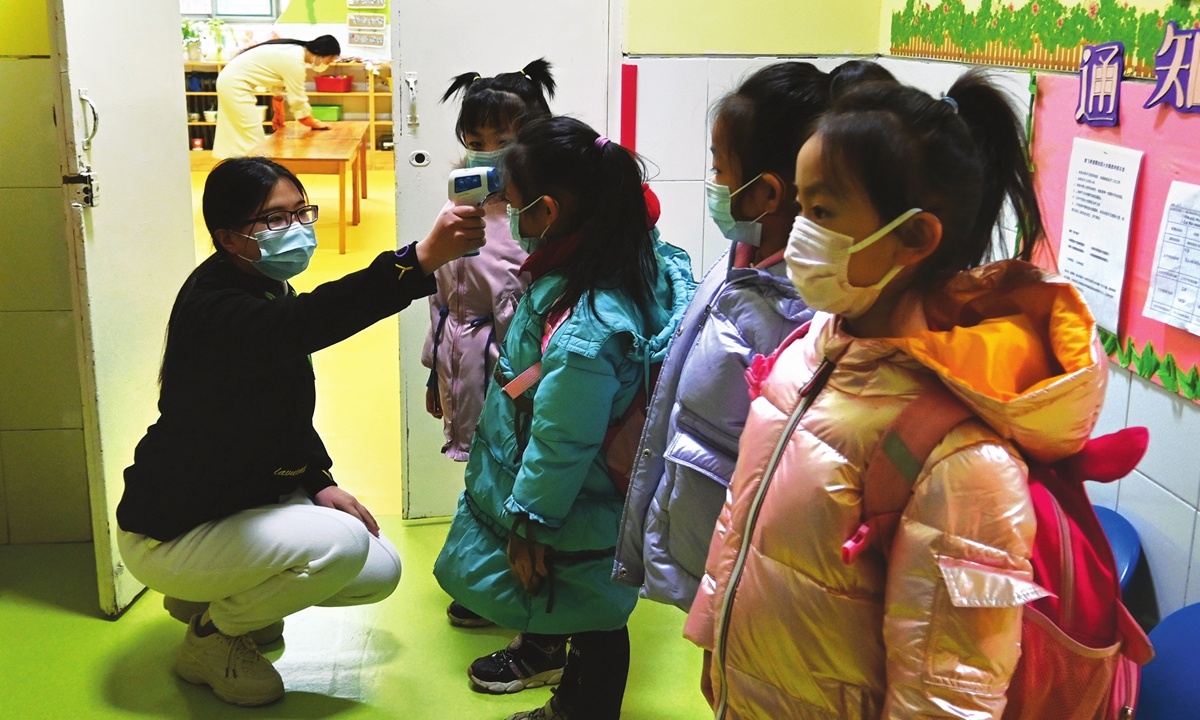 An incident regarding one COVID-19 super-spreader, who was initially identified as a silent carrier linked to 102 confirmed cases, has continued simmering in China, triggering widespread public concern over the growing rate of silent carriers emerging in recent domestic clusters potentially resulting in major outbreaks that are more difficult to control, with discussion arising on whether China needs to implement stricter measures to manage asymptomatic infections.

Chinese health experts believe asymptomatic infections that are harder to detect could pose an even more dangerous threat for local epidemic control and prevention than those confirmed cases, resulting in the coronavirus spreading faster and wider with the numbers of confirmed cases increasing exponentially if local authorities fail to find and manage silent carriers in a timely manner.

In addition, China's response to asymptomatic carriers has developed in line with the understanding of the silent infections. In the future, we may adjust our response according to a more in-depth understanding if questions remain unanswered, experts said.

A fresh outbreak in Wangkui county in Northeast China's Heilongjiang Province has resulted in a total of 243 asymptomatic infections and 145 confirmed cases in the province since the county detected its first asymptomatic infection on January 9, provincial health authorities said on Monday.

The continued advance of the coronavirus in Wangkui has spread to at least eight cities in three provinces, leading to the infection of a super-spreader in neighboring Jilin Province who then transmitted the virus resulting in the infection of 102 others.

Not only just in Heilongjiang, the current outbreak in North China's Hebei Province has also seen an increasing number of silent carriers being detected. As of Sunday, Hebei has reported 356 asymptomatic infections in 15 days since January 2.

The increasing number of silent carriers has sparked widespread public concern, as the hashtag 'why have more silent carriers been reported?' made the hot topic list on Sina Weibo on Monday with more than 400 million views as of press time.

Many netizens have raised questions on whether the virus is more contagious among silent carriers and how the Chinese authorities could tackle the growing challenges posed by these asymptomatic infections.

The number of silent carriers has not dramatically increased in the recent outbreaks in Hebei and Heilongjiang compared with previous outbreaks occurring in 2020. In general, silent infections are less contagious and possess a lower viral load than confirmed cases although in extreme cases, such as the Jilin super-spreading incident, infectivity may reach a high point, a Chinese health expert who requested anonymity told the Global Times on Monday.

Zhang Yuexin, a medical expert based in Northwest China's Xinjiang Uygur Autonomous Region, told the Global Times that the appearance of more silent infections being found in recent outbreaks was due to asymptomatic infections causing generations of concealed transmission.

"There are always new asymptomatic cases out there when the initial silent carrier is not detected in a timely manner" Zhang said, noting further that a generation of transmission would pass on in about five to six days.

Lu Hongzhou, co-director of the Shanghai Public Health Clinical Center at Fudan University, told the Global Times on Monday that the majority of asymptomatic infections will become confirmed cases and the infectivity of the virus for these patients in the incubation period could be the same as the confirmed cases, with asymptomatic infections potentially triggering new outbreaks.

Moreover, health experts warned that extra attention needs to be paid to a few silent carriers that are highly contagious.

Jin Dongyan, a biomedical professor at the University of Hong Kong, told the Global Times on Monday that about 10 percent of silent carriers, due to reasons including low immunity, are highly contagious although the viral load they possess is not necessarily higher than cases with symptoms, posing a greater threat for epidemic control than confirmed cases due to the difficulty in tracing and identifying them. 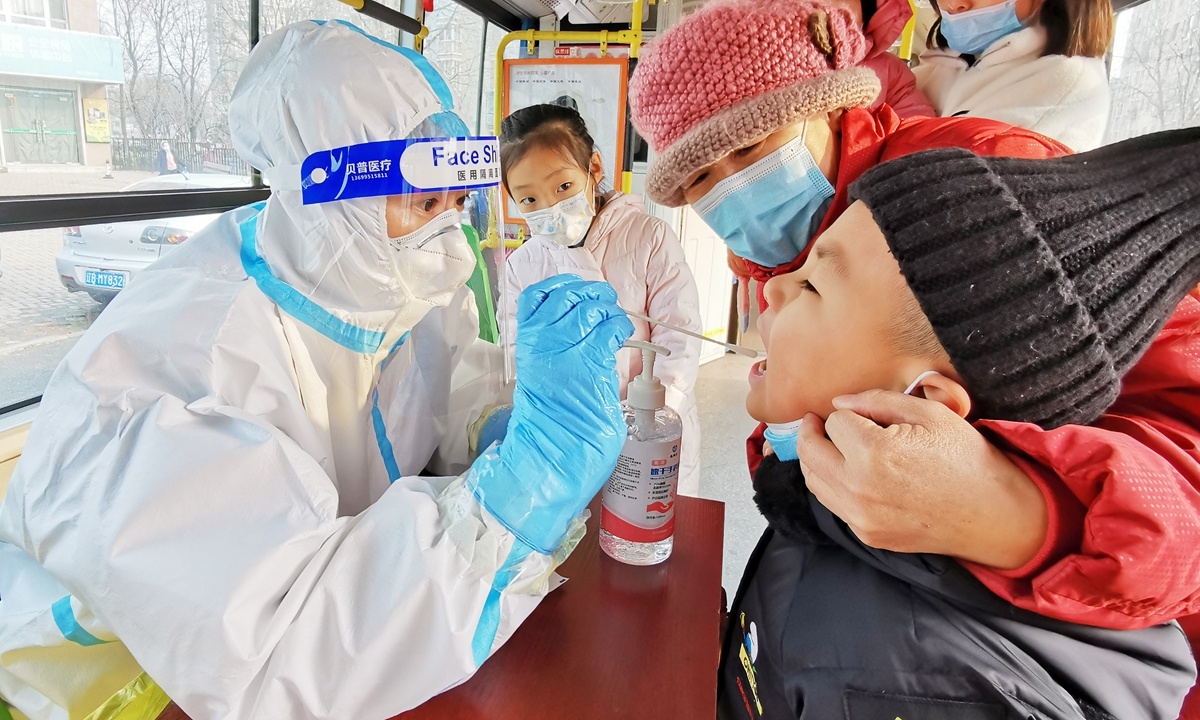 A medical worker conducts a nucleic acid test on a boy in Dalian, Northeast China's Liaoning Province on Wednesday. Dalian launched a citywide testing on Tuesday in response to a resurgence of COVID-19. On Wednesday, one new confirmed case and eight asymptomatic patients were reported in the city. (Photo: VCG)

Several sporadic outbreaks occurring in parts of China in recent months, including Dalian in Northeast China's Liaoning Province and Shijiazhuang and Xingtai cities in North China's Hebei Province, have all pointed to imported sources. Chinese experts said it revealed that China still has blind spots and loopholes in preventing risks posed by imported cases.

"Any contaminated imported items or environment could be a source of infection for a major domestic outbreak if we fail to disinfect them thoroughly or adopt sufficient protective measures" Zhang said, stressing the importance of locating any possible items, no matter how small, and disinfecting every imported product from high-risk regions.

Shanghai-based epidemiologist Jiang Qingwu told the Global Times on Monday that China has strict measures for all those coming from overseas, including 14-day quarantine periods and community observation, but after that we need to follow up on their situation and health for some time longer.

Chinese experts said that only by expanding nucleic acid testing can China detect silent carriers in time to cut the transmission chain.

Beijing, the Chinese capital, reported two new confirmed cases on Monday. The first case was found when the patient voluntarily received nucleic acid testing so that she could leave Beijing for other cities.

So far, how the first Beijing patient came to contract the virus remains a mystery, with the residential community where she lives being placed into lockdown and all residents asked to get tested.

However, Zhang said that if the two cases were linked to the Hebei or Heilongjiang outbreaks, it may hint the existence of more asymptomatic cases, thus more thorough nucleic acid testing is required; even probably the entire population of Beijing needs to take nucleic acid testing.

Due to the threat posed by silent infections, some Chinese experts have discussed whether China needs to be more vigilant regarding these cases, such as including them among confirmed cases in the daily reporting system.

The detailed travel records of silent carriers in recent outbreaks have been made public on a daily basis. It came after Chinese health authority required openly and transparently releasing the information of silent infections and conducting epidemiological investigation in a timely manner in April when the country started to releasing information of the silent infections in its daily reporting system.

A source close to the National Health Commission's COVID-19 expert team told the Global Times that they paid attention to silent carriers during the Wuhan outbreak and alerted community workers in Wuhan regarding close contacts who could be silent carriers that might infect others.

Experts have debated on whether silent carriers should have been included among confirmed cases during the early stages. Some say silent carriers could infect others and thus should be defined as patients but others deem that if the group shows no symptoms, they should not be considered patients.

At that time, it was hard to detect silent carriers as nucleic acid testing was not prevalent like it is now. Therefore, silent carriers and confirmed cases were calculated separately, the source said. "However, all these cases have been reported to the WHO separately."

China has been developing its understanding of silent infections and there are still many questions that remain unanswered about the asymptomatic carriers. China will adjust its management accordingly but does not currently need to include silent infections in the confirmed cases tally, experts said.

In the third version of the monitoring plan for COVID-19 cases issued by the NHC in January, it stipulated silent infections will not be included in the daily confirmed cases reporting system, and in the fourth version on February 7, it said the number of silent infections were not subject to mandatory disclosure. However, medical and health institutions at all levels were required to place them under centralized quarantine for 14 days and report them directly within two hours.

Then China started reporting the number of silent carriers from April 1 in its daily reporting system and issued detailed management regulations on silent infections, stipulating rules on reporting and managing silent infections and related close contacts.

Experts believe separating the categorization of cases into asymptomatic and confirmed can relieve the pressure on the medical system and ensure patients in different situations receive the best medical care.

Asymptomatic cases are normally under medical observation while confirmed cases with mild symptoms are arranged in normal inpatient wards. Cases with severe or critical illness are put into the intensive care unit, expert said.