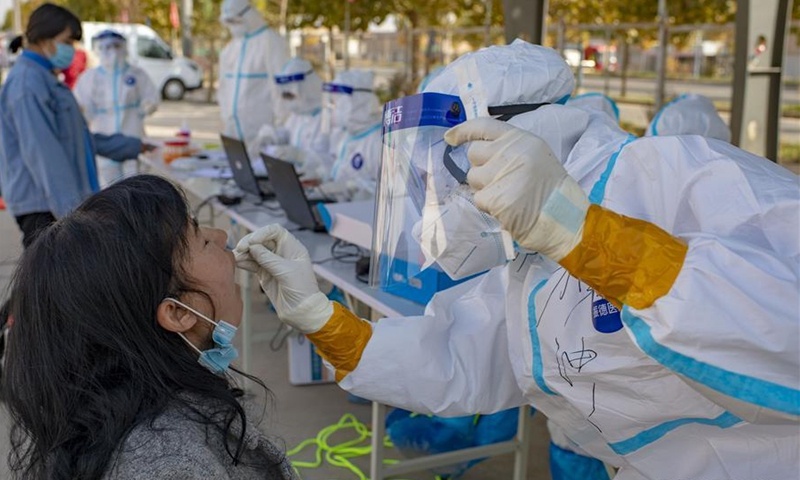 North China's Tianjin Municipality identified a new confirmed case of COVID-19 on Wednesday, bringing the total to 139. The patient is a cargo driver, who was diagnosed as asymptomatic on Monday and linked to the latest outbreak in a local frozen food warehouse, the People's Daily reported.

The patient experienced fever, excessive sweat and abnormalities in the throat, after he was quarantined at a local hospital and put under clinical observation.

After analyzing the sample taken from the patient's respiratory tract, the latest confirmed COVID-19 strain was found to share a high similarity with the virus strain prevalent in North America, said the municipality's health authorities.

The driver is a close contact of the earlier confirmed case on Sunday, who was infected with COVID-19 through cold chain food imports.

Tianjin announced that it has entered wartime mode following the new infection. The city had detected a positive sample for COVID-19 on the outer packaging of a frozen pork knuckle sample imported from Bremen, Germany.

On Tuesday, Tianjin found another silent carrier during a citywide inspection of cold chain workers and mass nucleic acid testing of frozen products.

The patient is a dockworker in the cold-chain industry  in the Binhai New Area, a local official said. He was transported to a local hospital immediately, and has not shown symptoms of fever or coughing.

Three samples taken in the city's Nankai district tested weakly positive for coronavirus on Tuesday, local authorities said. The locations in question were swiftly sealed off, and the personnel involved were sent to hospital for quarantine.

The district center for disease control conducted another round of screening of the locations, and so far found that all samples tested negative for the virus.