After 166 days of treatment in Wuhan, the former COVID-19 epicenter in China, Cui Zhiqiang beat a life-threatening case of pulmonary fibrosis brought on by COVID-19. 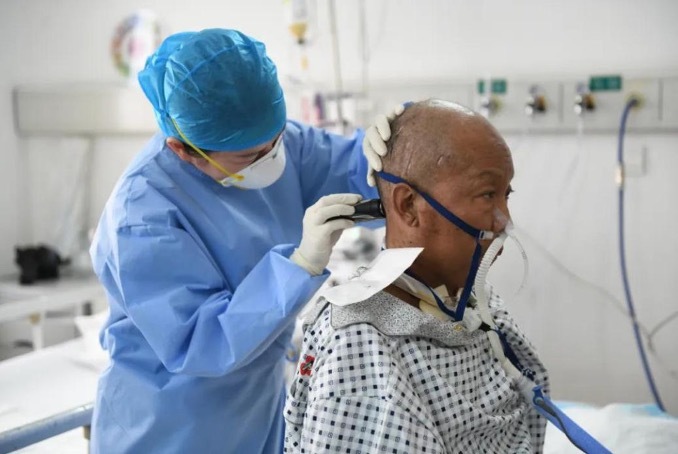 The 65-year-old is the first to be discharged from the hospital among 10 COVID-19 patients in the world who received lung transplant surgeries. Six patients underwent such surgeries in China, and one each in Italy, the U.S., Austria and South Korea.

For medics who have participated in Cui’s treatment, his survival is a meant-to-be result rather than casual luckiness. 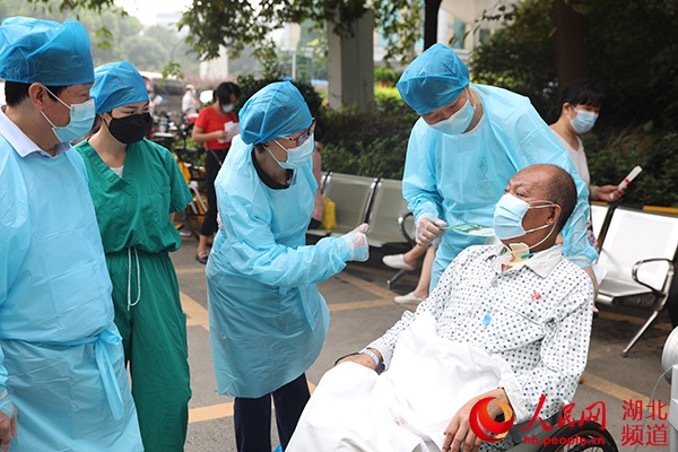 In the eyes of Cui Ying, Cui Zhiqiang’s daughter, her father is a strong man. On January 24, 2020, China’s lunar New Year ’s Eve, Cui Zhiqiang told his daughter that he felt cold. He thought he just had a fever, but his physical condition didn’t get better for the following two weeks.

On Feb. 7, Cui tested positive for COVID-19 and after several days was treated with extracorporeal membrane oxygenation (ECMO), a machine that oxygenates and pumps a patient’s blood.

During that period of time, more and more aid kept pouring into Wuhan. By early March, around 43,000 medical workers from over 340 medical teams were dispatched from all across China to aid Hubei province, some of whom participated in the treatment of Cui Zhiqiang.

However, enormous challenges still remained in efforts to treat him, whose life was threatened after using ECMO for over a month. Despite daunting tasks ahead, Zhou Chenliang, Cui’s attending doctor and also director of the intensive care unit (ICU) of Renmin Hospital of Wuhan University, felt confident.

“I have attended a seminar on COVID-19 death cases held by national health authorities, during which an expert mentioned that 75 years old is too young to die. Then I thought 65-year-old Cui is much younger, so we must try our best to cure him,” Zhou said.

Along with the experts’ experience, it is also the support of the country that has given Zhou such great confidence. 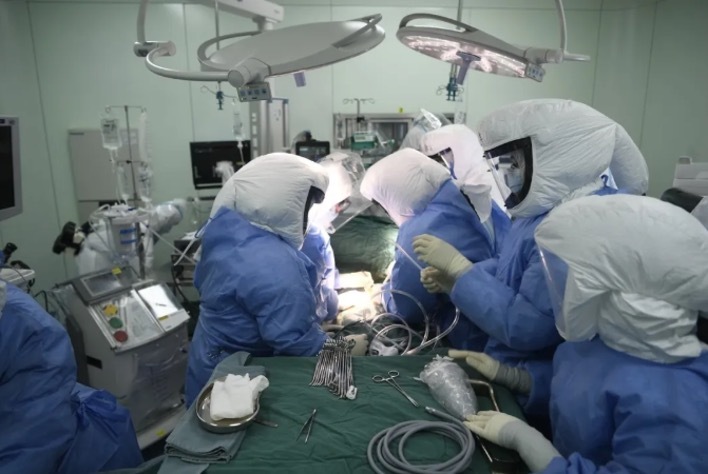 Thanks to the intensive care of the medical team, when Cui met the requirements for a lung transplant, experts worked to perform the surgery as soon as possible.

As the autonomous right of life is the foundation of the organ transplant, Cui has the right to decide himself whether to go ahead with the surgery. After waking up from a coma, the medics asked him, “If you agree to receive a lung transplant, blink your eyes. If you don’t, look left or right.”

The news that her father can have a lung transplant concerned Cui Ying at first, for fear that the operation fee might be too high for her family to afford, but she was soon relieved to hear that all expenses would be borne by the nation.

“At that moment, I began to believe that my dad’s survival chance was not one percent, but 100 percent,”Cui Ying said.

Every life is priceless 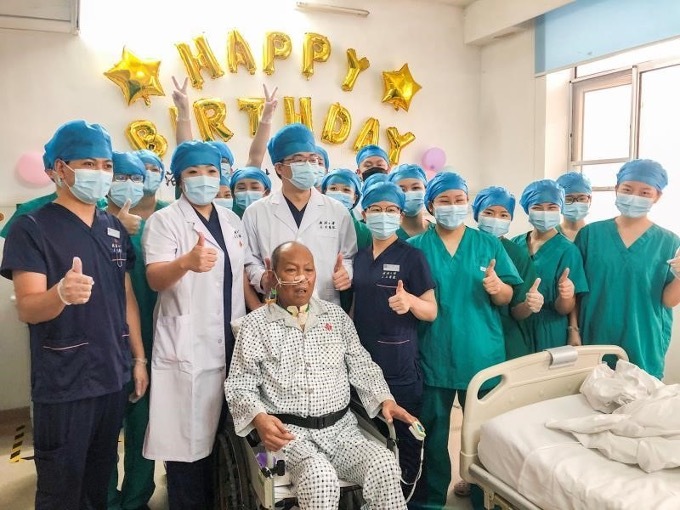 On July 21, 166 days after hospitalization, Cui was discharged from the hospital. (Photo/People's Daily App)

On April 20, more than 40 doctors and nurses entered the operating room to begin the large-scale operation.

Medics wore full-body protective equipment with three layers of gloves on, posing huge challenges for them to operate. Lasting 8 hours, the surgery used 10,000 milliliters of blood, the amount of blood in two persons’ bodies. Forty-four hours after the lung transplant, the ECMO, which had kept Cui alive for 62 days, was unhooked and Cui regained consciousness.

“For us [doctors], every patient’s life is priceless. In the process of treating patients, including Cui Zhiqiang, we have gained a lot of unprecedented experiences which are very valuable for us in saving more lives in the future,” said Li Guang, deputy director of the intensive care unit (ICU) of Renmin Hospital of Wuhan University.

After the surgery, a team consisting of around 30 medical professionals was established to offer 24/7 service to Cui. They have drawn up a series of rehabilitation plans to accelerate Cui’s recovery, teaching him basic functions he had lost, including breathing and swallowing.

On July 21, 166 days after hospitalization, Cui was discharged from the hospital. At a ceremony the hospital held for him that day, still unable to speak, Cui expressed his gratitude to his doctors by writing a “thank you” message to the medical team for the care he received.

“Helping patients like Cui beat the life-threatening disease and receiving positive feedback from them makes me feel that life is worth living”, said Lin Huiqing, a thoracic surgery professor who has participated in Cui’s treatment.