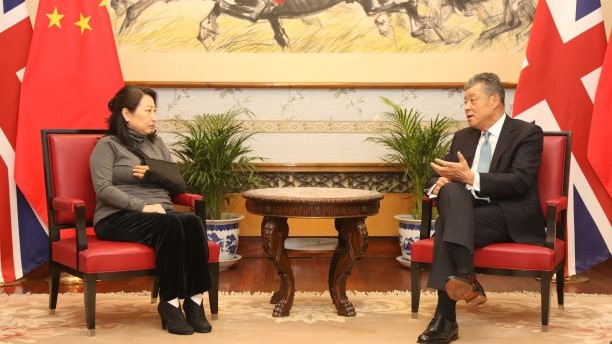 He made the remarks on Wednesday when he met with Hong Kong Secretary for Justice Teresa Cheng, who was injured in London after being mobbed by the anti-China elements seeking to disrupt Hong Kong.

Ambassador Liu once again conveyed the solicitude of the leaders of the Central Government to Secretary Cheng and sent their best wishes to her for a speedy recovery.

Ambassador Liu said the black masks they wore cannot conceal their sinister intention. There is no way that these people could be called "peaceful demonstrators" or "pro-democracy protesters" as claimed by Western politicians and media. They are in fact extreme violent offenders who have trampled on rule of law, disrupted public order, severely undermined the prosperity and stability in Hong Kong, and challenged the principled bottom line of "One Country, Two Systems".

Ambassador Liu mentioned the third press conference on the situation in Hong Kong he had hosted at the Embassy two days earlier, during which he gave a comprehensive explanation of the important statement on Hong Kong delivered by President Xi Jinping during the 11th BRICS Summit in Brazil. The press conference was aimed at helping the international community get a clear picture of the nature of what is happening in Hong Kong, see through the essence of the extreme violent offences, and understand and endorse the Central Government's decision to firmly support the SAR Government, the police and the judicial institutions of Hong Kong in ending violence and restoring order, firmly safeguard national sovereignty, security and development interests, firmly implement "One Country, Two Systems", and firmly oppose external interference in Hong Kong affairs.

Ambassador Liu emphasised that the motherland is the staunch supporter for Hong Kong. "We hope that Hong Kong will end violence and restore order at an early date, and seize the opportunities of the Guangdong-Hong Kong-Macao Greater Bay Area and the Belt and Road Initiative to achieve better development. We hope the 'oriental pearl' will once again shine brightly," Liu said.

Secretary Cheng expressed her thanks to the leaders of the Central Government for their care and support, and to the Chinese Embassy in the UK for its assistance.

She said she planned to explain the current situation in Hong Kong to the British friends and the wider international community, and did not expect that the anti-China elements seeking to disrupt Hong Kong would besiege and attack her, pushing her to the ground and leaving her with a fracture in the hand. This incident has fully revealed their attempt to reach their sinister goal through violence and intimidation, which would never be successful. Cheng said that some Western media have published distorted reports on this attack, and she will hold a press conference to disperse the distortions and reveal the ugly faces of the anti-China elements seeking to disrupt Hong Kong.

Cheng added, having gone through winds and rains, Hong Kong is highly resilient. She believed that with the staunch backing of the motherland and strong support of the Central Government, Hong Kong will overcome the difficulties and embrace a more beautiful future. The SAR Government and herself will continue to make relentless efforts in this regard.