Those attempting to interfere in China's internal affairs on the Hong Kong-related issue, undermine the stability and prosperity of Hong Kong, and attempts by some Western countries to contain China's development will not and cannot succeed, Chen Xu, China's Permanent Representative to the UN Office at Geneva, said on Tuesday.

He was speaking at a webinar titled "Hong Kong Will See a Brighter Future" held by China's Permanent Mission to the UN in Geneva to brief on the Hong Kong Special Administrative Region's (HKSAR) development situation at the 50th session of the UN Human Rights Council. 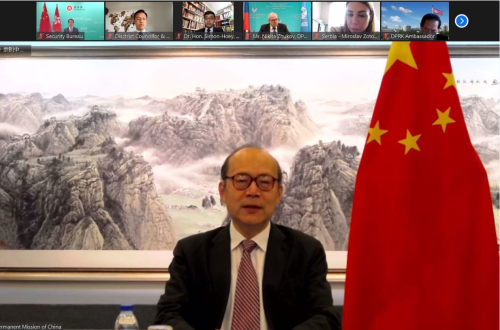 More than 60 participants, including diplomats from more than 30 countries, officials from the Office of the UN High Commissioner for Human Rights and journalists, attended the online event.

Chen pointed out at the webinar that in the past 25 years since Hong Kong returned to the motherland, the practice of "One Country, Two Systems" in the region has been a resounding success despite many challenges.

Through the promulgation and implementation of the law on safeguarding national security in the HKSAR and the improvement of the electoral system of the SAR, the central government has provided solid institutional safeguards for the long-term prosperity and stability of Hong Kong and the steady development of the "One Country, Two Systems," he added.

Stating Hong Kong has embraced the turnaround from chaos to stability and is at a critical period from governance to prosperity, Chen said that with the strong support of the central government and the joint efforts of the HKSAR government and all sectors in Hong Kong, the region will see a brighter future.

He noted at the 50th session of the UN Human Rights Council that nearly 100 countries had again voiced their collective or individual support for China's just position on issues related to Hong Kong, reflecting the international community's overwhelming aspiration.