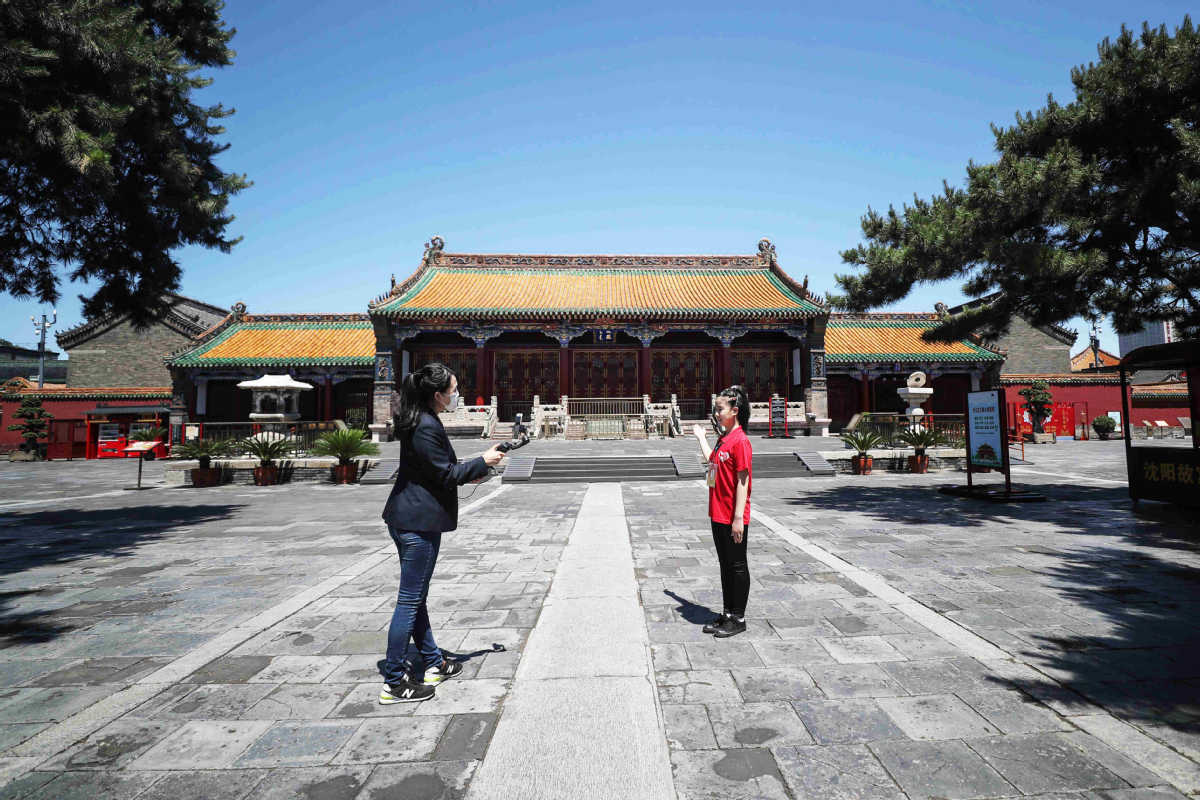 Yu Bingqing, right, a student in Shenyang, Liaoning province, volunteers to give a virtual tour at the city's Imperial Palace. (Photo: XINHUA)

With the pandemic forcing movie theaters nationwide to close, on Jan 25, Lost in Russia, directed by and starring Xu Zheng, became the first Chinese film to skip cinema release and premiere online.

It can be watched free on Byte-Dance's streaming platforms such as Toutiao and Douyin, thanks to the company paying 630 million yuan ($96.14 million) for the film.

Other movies intended for releasing theaters followed suit before cinemas across the country started to reopen on July 20.

The pandemic spurred the development of Premium Video on Demand, or PVOD, at home and abroad. People forced to stay home can watch new movies online by making payments ranging from 6 yuan to 24 yuan.

Five months earlier, a survey by the China Film Association and ticketing service Maoyan found that 73 percent of 1,530 respondents had paid to watch movies online, with 64 percent saying it was acceptable to do this.

On Sept 4, the long-awaited action film Mulan, which is set in ancient China, premiered on the streaming service Disney+ in the United States and some other countries, with an additional $29.99 charge on top of the monthly subscription fee of $6.99.

He said it is not the first time cinemas have been under threat, with the popularity of television, videos and DVDs also hitting them, especially in the US.

"Entertainment forms are changing over time. Just as the emergence of movies affected the popularity of drama theaters, the advent of new technology, such as 4D, will also impact the film industry," he said.

"It's convenient to watch movies online at home, but there is a lack of social contact," Zhou added.

Zhou believes that when the pandemic is brought under control globally, viewers will gradually return to cinemas because of the "irreplaceable personal experience".

He said some films are more suitable to watch at the cinema, for example, the Oscar-winning 1917, which offers an immersive experience in a movie theater.

Judging from the Chinese box office this year, he said viewers prefer to watch blockbusters made by well-known directors and which feature A-list stars, as these films appeal to both young and old audiences. 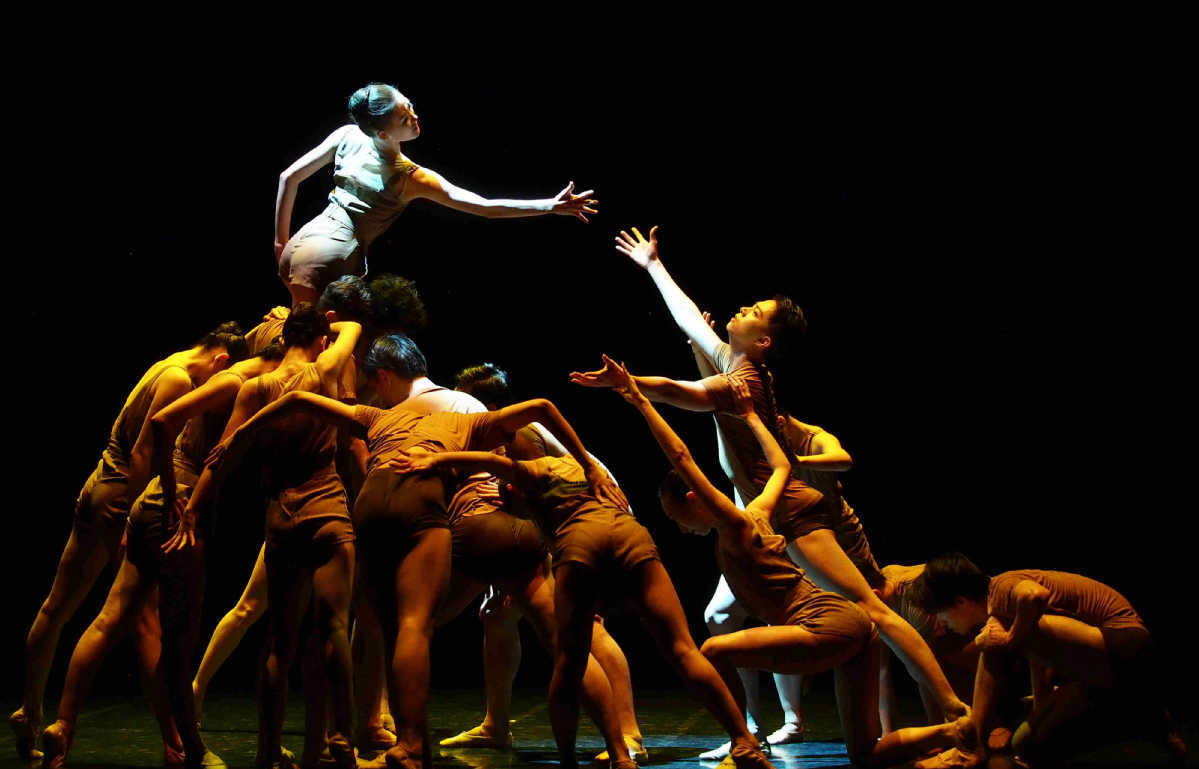 Editor's note: The COVID-19 pandemic has posed challenges to many aspects of social development and people's lives. In a series of reports titled "Fighting the Pandemic: 2020 in Review", we look at achievements made in different fields. This is the second part of the series.

Infections from COVID-19 had already become a public concern in China before the start of the Spring Festival holiday on Jan 25 as many people were preparing for annual family reunions during the weeklong holiday.

While the number of employees working from home during the outbreak rose, the integration of advanced technology, culture and entertainment helped them with daily life during tough times.

For example, smartphone users can access virtual travel at museums, buy new cosmetics, watch movies and online concerts, and even bid for artworks at auctions.

With museums closed due to the pandemic, such institutions nationwide launched virtual tours, enabling visitors to watch livestream broadcasts held by experts, including curators. They can also browse high-definition photographs of cultural relics, watch a virtual exhibition and take part in online quizzes.

These visitors have seized the opportunity to learn more about Chinese museums specializing in various fields, including those institutions that are not particularly popular.

Bai Xuesong, a tourist guide from Xi'an Beilin Museum, located in the capital of Shaanxi province, became an overnight celebrity with his humorous and knowledgeable livestream broadcasts featuring Chinese calligraphy. His popularity also triggered public interest in the museum.

In mid-March, Sina Weibo's monthlong activity "Virtual travel to museums" generated more than 390 million views, with over 7,100 original posts from museums at home and overseas, media outlets and individuals.

Although museums started to reopen in mid-March, with strict limits on the daily number of visitors, they have continued to use virtual travel activities to promote themselves and to give visitors an alternative choice.

On May 18, International Museum Day, institutions in China held a range of livestream activities. Curators from nine leading museums introduced their creative cultural products during a session on the retail platform Taobao, attracting more than 7.4 million views.

In May, a report by e-commerce platform Meituan showed that the five cities attracting the most searches for their museum audio guides and livestream broadcasts were: Xi'an; Beijing; Chengdu, capital of Sichuan province; Nanjing, capital of Jiangsu province; and Suzhou, Jiangsu.

Overseas museums, including those that remain closed, have cooperated with Chinese platforms to livestream their collections. These institutions include the Pompidou Center in Paris and the Prado Museum in Madrid.

In July, the Chinese tourism website Mafengwo invited travel influencers and tourist guides to share their stories of museums at home and abroad via livestreaming sessions, which included in-depth introductions to specific topics.

Li Xinjian, dean of the School of Tourism Management at Beijing International Studies University, said, "Virtual travel has not only cultivated potential visitors and promoted knowledge about museums－it has made people realize the influence of digitalization.

"Advanced technology allows visitors to learn about ancient exhibits without actually being on-site, giving full play to the educative function of museums."