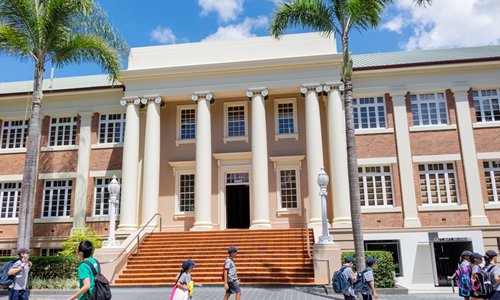 Students at the University of Queensland (UQ) in Australia expressed their support to the school's decision to suspend an anti-China rioter for two years who allegedly disrupted campus order and incited racism, saying "justice finally came."

Drew Pavlou, a 20-year-old Australian, also a student member of the UQ Senate, organized anti-China and secessionist rallies connected to China's Hong Kong Special Administrative Region (HKSAR), Xinjiang Uygur Autonomous Region and the Tibet Autonomous Region. On Friday, Pavlou was suspended by the university authority until 2022 due to his protest activities and offensive comments made on social media.

The suspension covers Pavlou's tenure as a student member of the UQ Senate.

Pavlou organized anti-China and secessionist protests on July 24, 2019, which eventually turned violent. Chinese students, including those from the HKSAR staged a voluntary patriotic rally at that time in response to the protests.

Chinese and Australian students at UQ expressed their support for the suspension against Pavlou, saying "justice finally came."

"Inciting racial discrimination in the name of 'democracy,' regarding the aggravation of contradictions as 'political correctness,' and taking prejudice and ignorance as principles are very foolish," a Chinese student from the university, who requested anonymity, told the Global Times on Sunday.

Another Chinese student reached by the Global Times said  that Pavlou often delivered hate speech and used Facebook to smear Chinese students, including politicizing their academic behavior, which made Chinese students vulnerable to cyberbullying and discrimination.

"I do not support someone who claims to hold peaceful protests and yet incites violence against another group of people," said the student.

An Australian local, who requested anonymity, also supports UQ's decision by saying that Pavlou's actions were inciting hatred at a particularly sensitive time in China-Australia relations.

"I think Pavlou took it way too far and his activities are counterproductive toward creating social cohesion in spite of COVID-19 and diplomatic tension between Australia and China," said the Australian student.

Pavlou refused to accept the decision and asserted that he would appeal, Australian media reported.

The university has presented 11 allegations of misconduct against Pavlou, including breaching integrity and harassment policies, along with the student charter. He was also engaged in intimidating conduct and disrupting campus operations.

According to a statement posted on the school's website, university officials said they had sent Pavlou multiple warnings. And even though he was an elected member of the UQ Senate, he was asked to stop speaking on behalf of the university without authorization.

Pavlou often purported to make statements on behalf of the university when protesting or posting comments on social media, which harmed the school's reputation.

The university also "strongly rejected" unsubstantiated claims that the university coordinated its public response to the student protest on July 24, 2019 with the Chinese Consulate, condemning the rumors as "ludicrous."

In March, Pavlou hung a sign on a wall at the university's Confucius Institute that said it was a COVID-19 "biohazard" and uploaded a photo of it on Facebook, according to Australian media.

"Bullying and intimidating behavior, including hate speech, will not be tolerated at UQ," said the university.