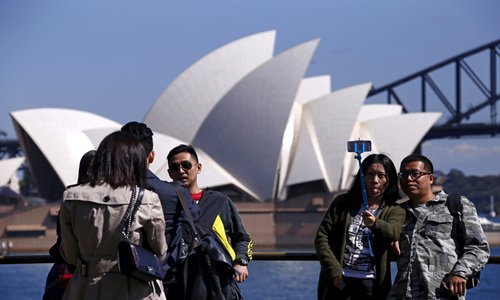 Some 105 Chinese PhD candidates and visiting students with offers at Australian universities have been waiting more than five months for their visas,  or three times as long as a standard visa grant period.

The Australian immigration authority replied to the students via email that Australian agencies have to undertake security checks for their applications.

Some 135 Chinese PhD candidates and 30 visiting students sent an email to the Global Times saying they were suffering from politically motivated setbacks which have severely affected their study. The students provided information to the Global Times including their full names and the name of the Australian universities they applied for. Of the students, 105 have been waiting for their visas for more than five months and nine have been waiting more than one year. One student has been waiting more than 17 months. The students planned to continue study in Australia in advanced Science, Technology, Engineering and Math (STEM) fields at over 20 universities and research institutions including the University of Melbourne, Monash University and the University of Queensland.

Some scholarships have expired or will expire if the visas are not granted. Some turned down job offers or quit their jobs. Some 75 percent of applicants to postgraduate research sector are granted visas within 51 days and 90 percent in four months, according to the official website of Australia's Department of Home Affairs.

"It has been over 16 months since I submitted my visa application on August 8, 2018! I sent an inquiry email to know its progress almost every month," Si Shangyu, who was accepted by the University of New South Wales to study materials science and engineering, said. "However, each time the reply is almost the same and perfunctory."

Si noted the relationship between Australia and China is not as good as before. "We all know this is the only true reason," he said.

Academic exchanges are supposed to be apolitical and scientific research needs more international cooperation in the 21st century, Si said.

Some students were funded by the China Scholarship Council (CSC) under the Chinese Ministry of Education. As CSC scholarships are government-backed, they thought they would have a smooth application process. But after they sent visa applications, they received no news, updates or further information.

No explanation was offered but a standard response e-mail from the Department of Home Affairs, and the visa review process was not transparent, the students say.

Students have contacted their respective schools, the Australian embassy and complained through an ombudsman. None of these methods have sped up the process.

A CSC staff member who only gave his surname "Meng" told the Global Times that applicants can file to switch countries and they would start to investigate the issue and try to help the students.

The Global Times has received no response about the visa issue from the Australian department or its embassy to China as of press time.

It was absurd to say that China was penetrating Australian universities, Chinese Ministry of Foreign Affairs spokesperson Geng Shuang said in November in response to reports that the Australian government required colleges to investigate cooperation with China.

Australian media and politicians have been slammed by Chinese officials for unnecessary extreme nervousness in handling China-related issues and hyping cases of so-called Chinese spies.