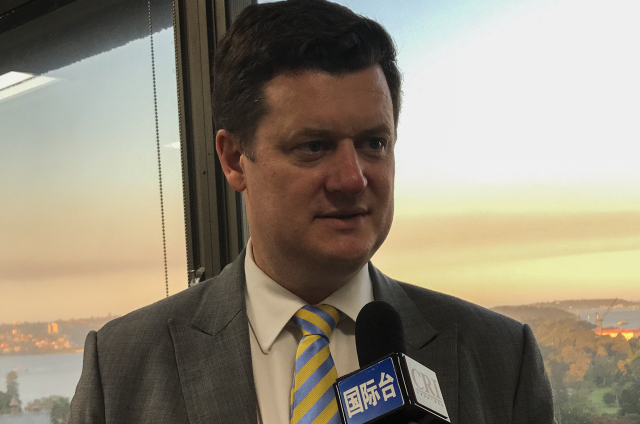 Dan Tebbutt, a senior official at Australian Trade and Investment Commission, or Austrade. (Photo: China Plus)

The new reform measures announced by President Xi Jinping at this week’s Bo’ao Forum for Asia have sent the world a message of certainty at a time of rising trade protectionism and have been warmly welcomed by many countries that champion an open economy including Australia.

Dan Tebbutt is with the Australian Trade and Investment Commission or Austrade. He has been Austrade Senior Trade Commissioner for North China and Minister-Counsellor at the Australian Embassy in Beijing since 2015. Speaking with CRI in Sydney, Tebbutt says Australia welcomes China’s continued commitment to the liberalization of its economy.

“Australia warmly welcomes President Xi’s speech this week. It’s a very significant speech and also a speech that’s very consistent with President Xi’s previous statements such as his Davos speech last year. I also note that it’s very consistent with other recent announcements by the Chinese government including liberalization in the financial services sector which was announced late last year, and also Premier Li Keqiang’s work report at the ‘lianghui’ (two sessions) where he announced new opening up for areas such as aged care and health care. Australia really welcomes those developments, we welcome China’s continued development to openness in the economy,” says Tebbutt.

In his keynote speech, President Xi Jinping noted that China will significantly broaden its market access in 2018, which, according to Tebbutt, brings new opportunities for the two countries to enhance their economic cooperation.

“From the Australian perspective, we’re particularly encouraged by his mentioning of areas such as aged care and health care. Those are some of the areas particularly addressed in the China Australia Free Trade Agreement which has been in force for almost three years now, has proved very popular. We’re seeing very strong interest in both China and Australia in cooperation around health care and aged care,” says Tebbutt.

China’s trade with Australia was worth more than 130 billion US dollars last year, a whopping 23 percent increase over the previous year, thanks to their Free Trade Agreement that went into effect in December 2015. Tebbutt says Australia is actively exploring new areas of cooperation that will boost two-way trade.

“We would hope to see continued commitment to, for example, the cross-border e-commerce – reforms that have been very successful in China in recent years that have led to significant increases in trade and commerce. Many more people in China are enjoying products such as Australian complementary medicines or skin care products. We hope to see that continue. From an Austrade perspective, we’re very glad to see companies such as Jingdong and Alibaba have opened offices in Australia. We continue to see opportunities for two-way trade through the e-commerce platforms,” says Tebbutt.

China will hold its first International Import Expo in Shanghai in November. Australian businesses can look forward to new and further opportunities in goods and services including the food, agriculture, tourism, education, healthcare, medical equipment and emerging technologies sectors. Australian Trade, Tourism and Investment Minister Steven Ciobo is set to lead the Australian delegation to the expo.

According to the Consulate-General of China in Sydney, about 90 major Australian companies have so far registered to take part in the expo.