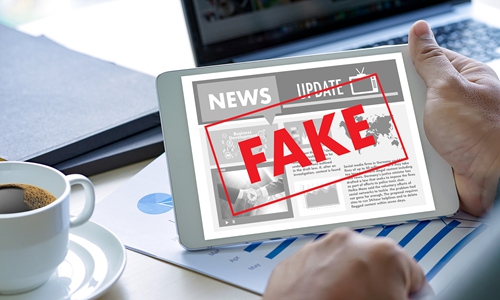 Western media outlets, particularly those in Australia, have lost their self-proclaimed journalistic professionalism and independence, as they rushed to hype up an unverified "Five Eyes" intelligence report that clearly seeks to smear China's handlining of the coronavirus outbreak, a Chinese expert said on Sunday.

The latest development out of Australia could also further exacerbate rising tensions between China and Australia over the latter's call for an investigation into China's handling of COVID-19, Li Haidong, a professor at the Institute of International Relations of the China Foreign Affairs University, told the Global Times on Sunday.

"Australian media, in hyping up such an unverifiable research dossier to smear China, has lost journalistic professionalism and objectivity. Some Australian media reports are always full of ideological bias against China and show their lack of confidence," Li said.

The Daily Telegraph, an Australian media outlet, reported on Saturday that it learned from an investigation dossier by the Five Eyes intelligence agencies that China deliberately suppressed or destroyed evidence of the coronavirus outbreak in an "assault on international transparency."

The report said that the 15-page research document they obtained showed that the Chinese government covered up news of the virus, destroyed evidence of it in its laboratories and denied of human-to-human transmission.

After the Daily Telegraph report, other Western media outlets also joined in hyping up the so-called dossier. But US intelligence is not confirming the existence of the 15-page document, US media outlet Fox News reported on Sunday.

The Five Eyes alliance consists of intelligence agencies from the US, the UK, Canada, Australia and New Zealand.

"Even if there was such a dossier, the Five Eyes alliance was established for the political aim of the five countries. Its investigation reports will only meet their political demands, instead of scientific truth," Li said.

Chinese officials have repeatedly criticized some western media and politicians for playing up the so-called "China concealing the epidemic" theory, calling such efforts are attempt to cover up their own failures in containing the virus in their countries.

It has also reiterated on many occasions that China always upholds an open, transparent and responsible attitude on the prevention and control of COVID-19. China also immediately reported COVID-19 to the World Health Organization (WHO), shared the gene sequence of the novel coronavirus with other countries, and carried out cooperation with the international community on prevention and control of the pandemic, officials have noted.

Some Western accusations against China over the COVID-19 even run counter to the findings of the WHO and even public statements from their own officials.

The WHO sated on Friday that COVID-19 was natural in origin, after having listened again and again to numerous scientists, who have looked at the sequences, analyzing the virus.

The US Intelligence Community also concurs with the scientific consensus that COVID-19 was not manmade or genetically modified, according to a statement issued by the office of the Director of National Intelligence of the US on its website on Friday.

Also, Australian Prime Minister Scott Morrison, when asked about US President Donald Trump's statement that "the novel coronavirus originated from a laboratory in Wuhan," said he did not see strong evidence to prove this on May 1.

However, since the outbreak of COVID-19 in Western countries, some media and politicians have continued to accuse China of concealing the pandemic and has even associated the novel coronavirus with a lab in Wuhan.

Li noted that Australia and some other Western countries made a fatal mistake in their handling of the pandemic and now seek to blame the WHO and China for their failure to fight the outbreak.

The latest report in Australia media also came as China and Australia are engaged in a war of words over the latter's call for a so-called independent investigation into the global response to the coronavirus, including China's early response to the outbreak in Wuhan, Central China's Hubei Province.

Chinese officials have harshly criticized the move. In an interview with NBC news on Tuesday, Chinese Vice Foreign Minister Le Yucheng said that China is open to an honest international investigation and scientific exchanges among scientists.

What the Chinese side opposes is putting China in the dock without any evidence, presuming guilt in advance and then seeking evidence through so-called international investigations, Le said, adding that it is well known that so called "information" from the US intelligence community has caused many disasters to the world.

Australian media said that the Five Eyes dossier also showed that the Chinese ambassador to Australia carried out economic coercion on Australia and that China has blocked the international community in launching an independent investigation into the source of the virus.

"Some Australian media and political elites have lost their independent judgment of the country's overall interests and have adopted a US-led approach to smearing China over COVID-19. They are hurting the profound friendship between the two peoples and the common interests that have long coalesced," said Li, the expert.