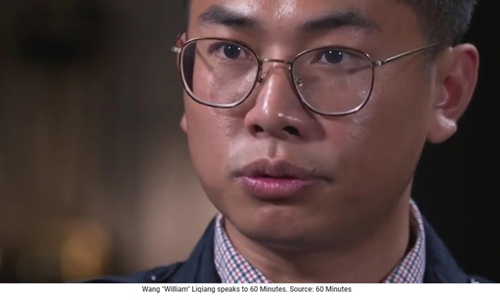 Chinese experts slammed Western media for defaming China in disregard of the facts after Shanghai police clarified that self-confessed "Chinese spy" Wang Liqiang, who has applied for political asylum in Australia, is in fact an ex-con.

Shanghai police said on Sina Weibo Saturday night that Wang is wanted for involvement in a fraud case involving 4.6 million yuan ($653,000). He was previously sentenced to 15 months in prison in 2016 for fraud.

Wang left for Hong Kong on April 10, the police said, noting that his Chinese passport and Hong Kong permanent resident identity documents were forged. He is said to be 26 years old from Nanping, East China's Fujian Province.

Police said they are still working on the case.

The announcement came after on Saturday The Sydney

Morning Herald reported that Wang had "defected" to Australia. The newspaper said Wang was ordered to "shift his attention from a covert operation to undermine Hong Kong's democracy movement and focus instead on meddling in Taiwan's 2020 elections."

Based on the report, Wang is supposed to be a very senior and important intelligence officer.

"But how could a 26-year-old man with a wife and son living in Australia be [a spy]," Li Haidong, a professor at the China Foreign Affairs University's Institute of International Relations, told the Global Times on Sunday.

The only explanation is that Wang not only is a fraudster, but also tried to get political asylum by making up stories, Li noted.

Yu Lei, a researcher at the Oceania research center at the Guangzhou-based Sun Yat-sen University, told the Global Times on Sunday that if Wang was indeed a "Chinese spy," the Australian intelligence community would have extracted Chinese intelligence from Wang and protected his identity from being published in the media as best they could. "However, considering the spread of the media reports about Wang, most likely Australian intelligence officers did not believe Wang's story, but instead exposed him in public, which provided the media good material to defame China," Yu said.

The reports by Western media, including the Australian Broadcasting Corporation and The New York Times, to spread Wang's untenable story reflect that they care less about the credibility of the story than whether Wang is a fraud suspect who used a forged identity to cheat his way to an Australian green card or citizenship. Instead, it is clear they want material to demonize China even in disregard of the facts, Yu noted.

Chinese police announced on August 22 that Simon Cheng Man-kit, 28, then an employee of the British Consulate General in Hong Kong was detained for soliciting prostitutes after Western media extensively reported that Cheng "had gone missing" during a business trip to Shenzhen, a mainland city that borders Hong Kong.

Australian media outlets have previously published several reports which alleged that Chinese students in Australia could be spies, and that China had infiltrated Australian elections and interfered in Australian domestic affairs, which have been picked up by other Western mainstream media.

Geng Shuang, a spokesperson for China's Foreign Ministry, said in October that China hopes that the Australian side will learn from the setbacks in the relations in recent years, look at China and China-Australia relations in an objective, rational and just manner.