A CCTV report in mid-April showed that pornographic and vulgar content has been found in the Chinese version of popular children's online game Minecraft. 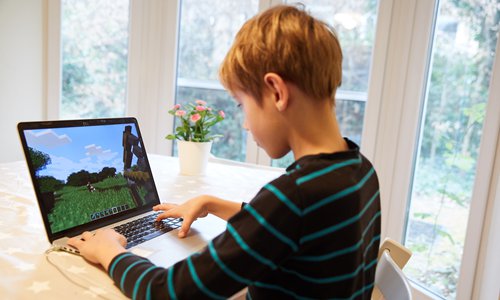 NetEase, its agency in China, has vowed to rectify the problem and apologized for ineffective supervision.Meanwhile, industry insiders said that with the popularity of mobile phones, such problems will become more frequent, while education experts have called for new laws to protect children in the virtual world.Not for kidsAccording to the CCTV report, a parent in East China's Shandong Province, surnamed Li, found that "vulgar language and pornographic information" was common in the online game Minecraft, which is very popular among her child and his peers in primary schools.The pornographic information appeared in homophonic Chinese characters and Latin letters. Some information openly said "find minors to chat naked." "Three out of 10 posts in the game have such content, with some looking for 'boys under 13 or 14 years old,'" she said.But when Li tried to report her findings to the game operator, she found there was no reporting channel in the game.The game is certified suitable for users 4 years old and above. "This shows you that many very young children play Minecraft," Li said.In the last 18 months, the game has been downloaded more than 27 million times in app stores, CCTV reported.The sandbox game Minecraft was released by Swedish game developer MOJANG in 2009. It has become one of the most popular games around the world in the past decade. NetEase games on May 20 announced it had the proxy of Minecraft's Chinese edition and released the open beta in August 2017.Tackling the issueShanghai's culture watchdog met with the game's Chinese operator on April 15 to discuss the issue of suspected vulgar and pornographic problems in Minecraft run by NetEase.The watchdog ordered the company to conduct an overhaul of vulgar content, according to a post on the official Sina Weibo account of the Office of the National Work Group for "Combating Pornography and Illegal Publications" on Wednesday.Meanwhile, the Shanghai Municipal Cultural Market Administrative Law Enforcement Office has filed a case and commenced investigations.On April 12, days after the CCTV report, NetEase apologized for its ineffective supervision. It announced that it would close the customizing rooms function, check current rooms, add a clear reporting button and strengthen supervision."Minecraft wasn't like this before it was brought into China. It was harmonious and players enjoyed building in it," Wang Baishi, a devoted game player based in Beijing, told the Global Times on Thursday."Once it entered China's market, especially when it could be played on mobile phones, all kinds of players could join the games, including those 'low-quality' ones," Wang said.Like Wang, many Chinese players have had positive experiences playing Minecraft. In 2016, a team of Chinese gamers spent 14 months reconstructing Beijing's Old Summer Palace (Yuanmingyuan) online, which was destroyed by the Anglo-French Allied Forces in 1860. Setting prioritiesBy July 31, 2018, there were 169 million underage netizens in China, accounting for 93.7 percent of all minors in the country, according to a report issued jointly by the central committee of the Young Communist League of China and the China Internet Network Information Center, CCTV reported.Mobile phones are their main tools for surfing online. More than 13 percent of underage netizens use the internet for more than three hours a day.Meanwhile, the report indicated that 15.6 percent of underage net users admitted in the survey that they have encountered internet trolls. More than 30 percent of them have seen information online about violence, gambling, drugs and pornography.Apart from games, CCTV reported that an app that helps children do their homework has also been found to be filled with improper content for minors.The report urged lawmakers to add internet content to China's law on protection of minors."If the internet service provider does not adopt the necessary measures when receiving reports, it bears the responsibility of joint infringement, or even criminal complicity," Zhu Wei, a professor at the China University of Political Science and Law, told the Global Times on Thursday.Zhu said licenses are needed before an internet product is released when it is related to children. "The internet develops very fast, but when it comes to children, it is better if it's slower and later to ensure children's safety," he said. "The protection of minors' benefits should be the priority."