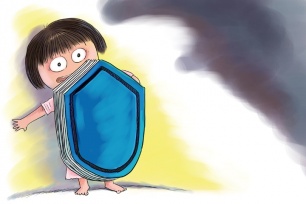 The National Office Against Pornography and Illegal Publications said on Saturday that it's investigating websites providing sexually explicit pictures and videos of children.

On Thursday, the Beijing News received a tip on social media saying that five Chinese-language websites had been providing sexually explicit pictures and videos of minors.

The front pages of the websites featured pictures of nude minors. Some pictures were captioned in Chinese as being of "four-year-old young girls", "girls with big eyes" and "high-school teens", the newspaper reported.

People were told to register and pay membership fees ranging from 30 to 3,000 yuan ($4.22 to $422) for more content after they clicked on the pictures. Upon registration, people could view videos of Chinese-speaking minors posing in the nude and even men sexually abusing young girls, the report said.

The websites, all registered overseas, are no longer accessible. The National Office Against Pornography and Illegal Publications said in a statement on Saturday that an investigation was launched as soon as it received the tip.

The office vowed to trace the victims by working with legal authorities. If people in China were involved in the websites, they will be harshly punished in accordance with the law.

Wang Yaodong, an information technology worker from Beijing, told the Beijing News that the servers of two of the websites were in Seoul, while the servers of another two were in the United States. The fifth website's server could not be located.

The authorities can easily block such websites, but it will be very difficult to find the people responsible for them, he said, as they frequently change overseas servers to avoid being detected.

Over the weekend, posts on Chinese social media platforms dubbed the exposure of the websites as the Chinese version of "Nth room". People said they were shocked at how easy it was to access such content, with many urging China to offer better sex education to the public, including children.

The "Nth room" scandal refers to a digital sex crime in South Korea that took place in Telegram chat rooms. At least 74 victims were exploited in the case, in which a man surnamed Cho allegedly lured victims, including underage girls, into taking naked photos and later threatened and exploited them into performing sex acts, the Yonhap New Agency reported on March 23. At least 10,000 users are suspected of paying to watch the videos, the report said.

In July, the country's top court said curbing child abuse online was an urgent issue, and asked parents and schools to teach children how to better protect themselves from predators.