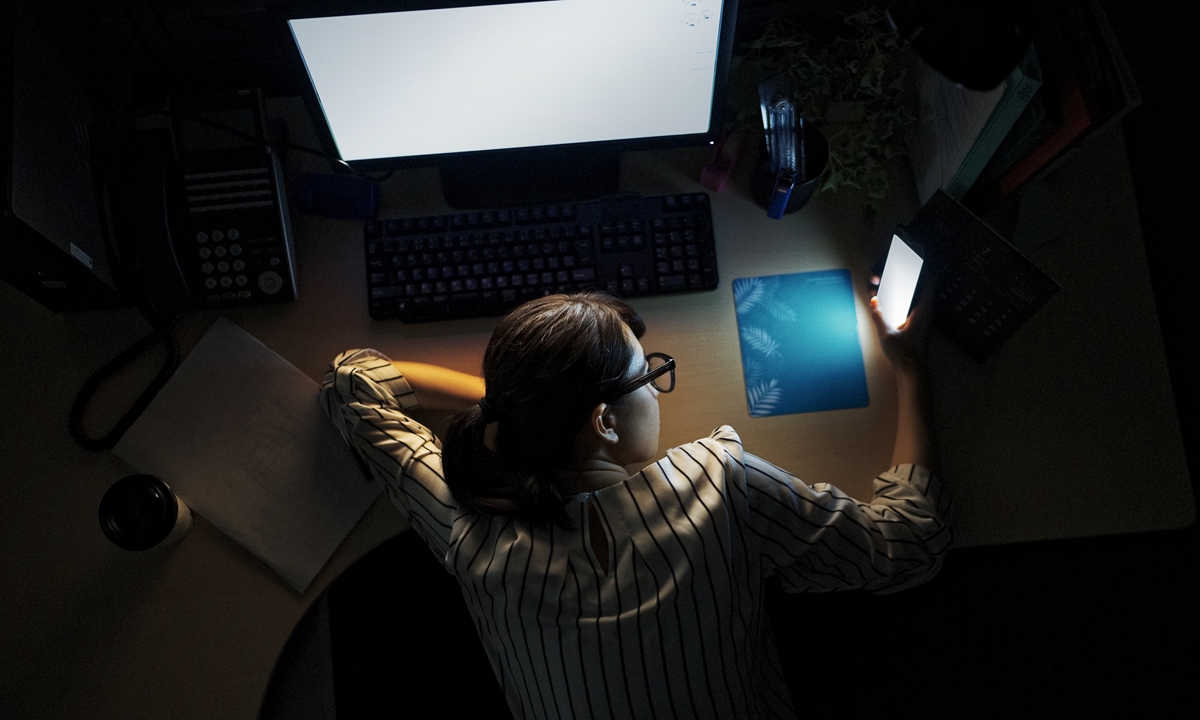 A female employee is working overtime at her desk. (Photo: VCG)

Authorities in East China's Hangzhou said they are investigating the sudden death of a 22-year-old woman, who lost consciousness after days of overwork, as the case triggered renewed discussions about the "996" overworking culture across the tech industry on social media.

The young woman referred to as Huihui had reportedly worked for four or five days in a row at an internet company in Hangzhou until 4 or 5 am before she collapsed, media reported.

A notice released by the resources and social security bureau of Hagnzhou's Binjiang district on Thursday confirmed the woman had worked at a company called Hangzhou Muke Cultural Media Company. The bureau said it will investigate the case together with other departments, and if the company is found to have violated labor laws, it will face severe punishment.

The case has become a hot topic on Sina Weibo on Thursday, with many asking if the woman's rights and interests were fully guaranteed during her overtime work. In recent years overtime culture has swept through many technology businesses, including companies in the online services and e-commerce sectors.

When Huihui was sent to the hospital by her colleagues, she had already lost consciousness and her skin had turned purple. It was "sudden death due to myocarditis" and she eventually passed away despite being treated in the ICU for six days, Lu Xiao, a doctor from the Second Affiliated Hospital of Zhejiang University School of Medicine, told local media.

"My child finally left us two lonely old people on July 26, 2022. Thank you for your help during this period. I hope all children and kind-hearted people will take good care of their health. While they strive to work, they can take good care of themselves," Huihui's father wrote on social media.

After the incident, her father released videos online pleading for help. In the videos, he said his daughter found the job to help the family as they were struggling with her university loans. He asked for aid from netizens so that her daughter could receive a heart transplant, before she was announced dead.

China's Supreme People's Court (SPC) and the Ministry of Human Resources and Social Security have previously called on employers to ban the "996" work schedule, where employees work from 9 am to 9 pm, six days a week. The departments mentioned above said that workers are entitled to remuneration, rest and vacation in accordance with the law and it is the legal obligation of employers to abide by the national working hour system.