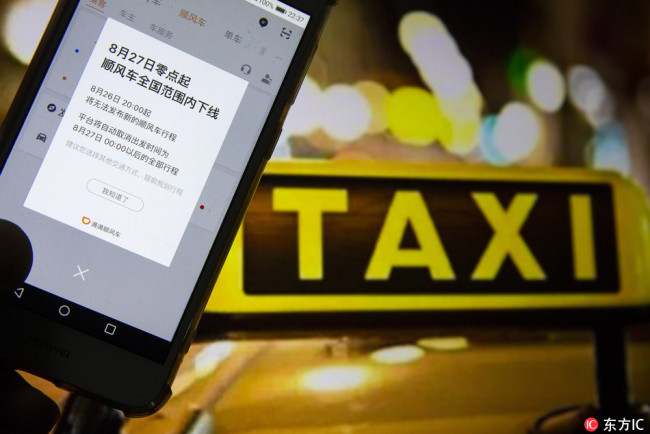 Didi announced that the company would suspend its hitch riding service across the entire country and reappraise its business mode, starting from August 27. (Photo: IC)

The Ministry of Transport (MOT), the Ministry of Public Security and local authorities on Sunday ordered ride-hailing platform Didi Chuxing to rectify operation patterns so that ensure safety with its services after a female passenger was killed in east China's Zhejiang Province.

The ministries and authorities in Beijing and Tianjin summoned Didi executives for meetings on Sunday, demanding a "comprehensive rectification" on its hitch riding service.

According to local police, a 20-year-old woman went missing on Friday afternoon after hailing an auto from Didi in the city of Wenzhou. The driver was caught by police on Saturday morning, and confessed to rape and murder.

The incident came after a 21-year-old female flight attendant using Didi was murdered by her hitch driver in the central city of Zhengzhou in May.

The two incidents "exposed great management loopholes and safety perils with Didi," said Xu Yahua, an MOT official in charge of transport services, during the meetings.

The MOT ordered Didi to carefully investigate recent safety incidents and punish those responsible in a serious manner.

Safety perils must be thoroughly combed and addressed, and illegal ride-hailing business in the name of hitch riding must be banned, according to the ministry.

It demanded that no unauthorized cars and drivers should be admitted to Didi's platform from now on, and that those are already admitted be expelled faster.

The information of cars on the platform must be fully connected with the national regulatory network in a real-time and authentic manner, and the quality of the information must be ensured, the ministry said.

The progress of rectification should be timely updated with the public, it noted.

Didi should not disrupt the market order with prices below operating costs, according to transport authorities of Tianjin, where the company is registered.

Executives of Didi promised to suspend its hitch riding service nationwide from Monday and reevaluate the business model.

A plan on improving compliance will be submitted to authorities by Sept. 1, and the company's customer service system will be upgraded, the executives said.

The company also pledged to launch a service to allow users to contact the police in case of emergencies, and to improve the mechanism of providing evidence for the police.