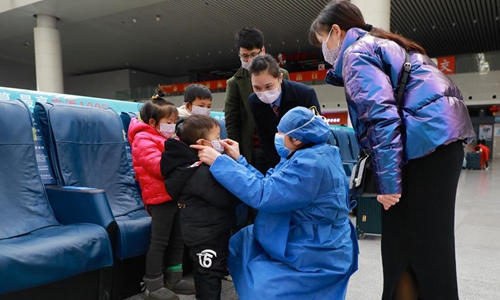 Local authorities have set up an investigation team to look into the death of a 17-year-old boy with quadriplegia and cerebral palsy, after he was left alone for six days when his family was quarantined for suspected infection with the coronavirus.

The local government of  Huajiahe county has launched an investigation into the case and will issue an official announcement of the investigation result on its website as soon as possible, a staff member at the county government told Global Times on Thursday.

The government's reply came after Yan Cheng, a resident of a village in Huajiahe county, Central China's Hubei Province, was found dead on Wednesday.

His father, Yan Xiaowen, and 11-year-old brother, were quarantined on January 24. A letter posted on Sina Weibo on Tuesday and claimed to have been written by Yan Xiaowen, the father, suggested that he was worried that no one would take care of his son, who was unable to move, and asked for help with donations of protective equipment to his son.

"We haven't received any donations since he posted the letter," Liu Zhenglei, a staff member at the health center of Huajiahe county, told Global Times on Thursday. Liu's phone number was given in the letter as the donation contact person.

The village committee allegedly found a hotel where they wanted to quarantine Yan Cheng on Wednesday, but unfortunately he died that same afternoon.

"His cause of death - starvation, coldness, or disease, will be determined by the experts of the investigation team," Wu Chengtao, an official of the Huajiahe county government, told Emergency Call, a video news program, on Thursday.

However, Yan Xiaowen said the investigation team had not contacted him as of press time.

News of Yan Cheng's death broke the hearts of netizens and stoked their concerns over those who cannot take care of themselves but are left alone in their houses with their families being quarantined because of the coronavirus outbreak. They urged local governments and charity groups to share the responsibility and take care of those who are left behind.

"What a tragedy… seeing a disabled person starving to death at the beginning of the new year! This is a warning for the local government and the public that these people are also at a high risk if not taken care of properly," wrote a Weibo user with an angry emoji.

"Such a tragedy reflects the problems that local governments have in governance regarding the capacity to respond to sudden diseases, especially at the grass-root level," Yan Jirong, director at the Institute of Political Development and Governance of Peking University, told Global Times on Thursday.

The epidemic has cut off some families' self-management mechanisms, and if the government cannot deal with this gap in a timely manner, it may cause huge trouble for society, just like this unfortunate family, Yan said, noting lessons should be learned from this case.

Governments at all levels need to learn to stop carrying out policies rigidly and realize governance with scientific principles, which is crucial to China's modernization, analysts said.

This is not an isolated case involving people under quarantine who have requested the help of others with taking care of their children.

A nurse in Wuhan turned to Weibo for help on January 23, saying that she and her husband were suspected to have been infected, and they worried that no one would be with their two kids, who are 2 years old and 4 months old respectively, if they had to be quarantined.

Fortunately, their post gained public attention and the local government allowed the husband's sister to go to Wuhan to take care of the kids, according to the Jiemian News. The city was locked down on January 23.