China's top military authority has conferred posthumous citations to four members of the People's Liberation Army Ground Force who died during a border clash with Indian troops in June last year in the Galwan Valley, the military's flagship newspaper reported on Friday. 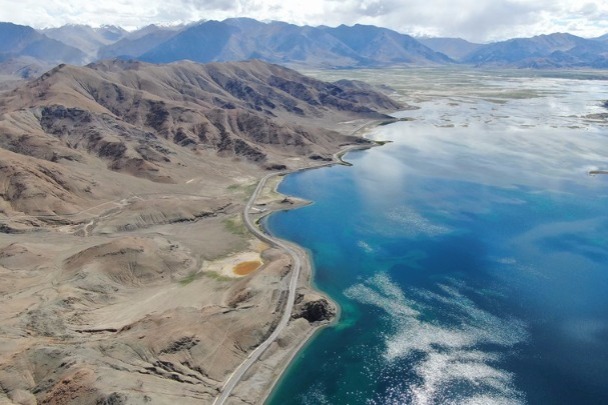 This is the first time the Chinese military has published the number of casualties, the names of the fallen soldiers and details about the border clash with India.

The fallen soldiers and the injured will always be remembered by the country and its people, and the family members of the deceased heroes will be taken good care of, Defense Ministry spokesman Ren Guoqiang said on Friday.

The Central Military Commission gave the honorary title of "Hero Safeguarding the Motherland and Protecting Borders" to Chen Hongjun, commander of a motorized infantry battalion under a border defense regiment, and awarded a first-grade service citation to Chen Xiangrong, Xiao Siyuan and Wang Zhuoran, soldiers of the regiment, according to the PLA Daily report.

Chen Hongjun was only four months away from becoming a father and had promised to his wife that after his retirement from the military, he would help her more in raising their child and preparing dinner and would also go fishing with her, the report said. It added that Xiao kept a picture of a "beautiful girl"－his girlfriend－inside his wallet and had told his comrades that he wished to marry her and make dinners for her for the rest of his life.

It's really sad that they could not wait until their wishes came true, but sacrificed their lives on the plateau to protect the country's sovereignty and safeguard peace at the border, Foreign Ministry spokeswoman Hua Chunying said on Friday.

"I was deeply touched when I read the parts of their diaries saying 'my love is so clear and it's only for China'," Hua said.

The commission also conferred the honorary title of "Heroic Regiment Leader Safeguarding the Motherland and Protecting Borders" to Qi Fabao, commander of the border defense regiment, the newspaper said, noting that Qi was seriously injured during the conflict.

In China's military honor system, an honorary title is the highest recognition and award to a service member, followed by a first-grade service citation.

According to the PLA Daily report, "foreign troops" severely violated bilateral pacts between the two militaries by crossing the Line of Actual Control, building illegal structures on the Chinese side, and performing provocative acts, in attempts to unilaterally alter the status quo along the border. They even violently attacked Chinese officers and soldiers who came to negotiate the situation in a peaceful manner, the report said.

Having seen that their peaceful efforts to protect bilateral relations and border stability were met only with more aggression, the Chinese troops fought back and gained "significant victories" and effectively safeguarded national sovereignty and territorial integrity, according to the newspaper.

However, the border tension escalated in June as foreign soldiers crossed the Line of Actual Control again in brazen violation of bilateral agreements.

Following border dispute rules and terms agreed by both sides, Qi, commander of the border defense regiment, led several soldiers to negotiate with the foreign troops, only to find that they were outnumbered by the opposition, who had intentionally mobilized and deployed a large number of soldiers in the hope that the Chinese troops would be scared off.

Despite Qi and his soldiers being outnumbered, they bravely defended themselves in the face of the foreign troops' steel bars, clubs and rocks before Chen Hongjun, the battalion commander, led his men to join the confrontation, according to PLA Daily.

Within a short time, the Chinese soldiers expelled the foreign troops who "paid a heavy price", leaving many injured, the report said.

It explained that Chen Hongjun, Chen Xiangrong and Xiao Siyuan died courageously while fighting. Wang Zhuoran died as he tried to save his comrades who were trapped in a freezing river when they rushed to take part in the conflict.

Ren Guoqiang, the Defense Ministry spokesman, said on Friday afternoon that responsibility for the Galwan Valley conflicts fell utterly on India because it was the Indian military that deliberately caused the incident and casualties.

"After the conflicts, the Chinese side exercised a high level of restraint in consideration of the relations between the two countries and two militaries and strove to de-escalate the tension," he said in a news release published on the ministry's website.

"However, the Indian side has hyped up the incident several times, distorting facts, misleading the international community and libeling our troops."

Ren said that history allows for no falsification and heroes shall not be forgotten.

"The Chinese media's coverage about our heroes is an objective presentation of the facts and would help to tell the truth to the world and enable people to know who is righteous and who is not."

A source with knowledge of the incident who wished not to be named said on Friday that the PLA Daily's reporting shows that claims from some Indian media and Western intelligence agencies saying that dozens of Chinese soldiers were killed and injured in Galwan Valley were nothing but lies.

He said that the Indian media fabricated the so-called "victory" of the Indian troops only to fool themselves, given the fact that Indian officers and soldiers were utterly routed and fled in panic after they faced a strong counterattack from PLA soldiers.