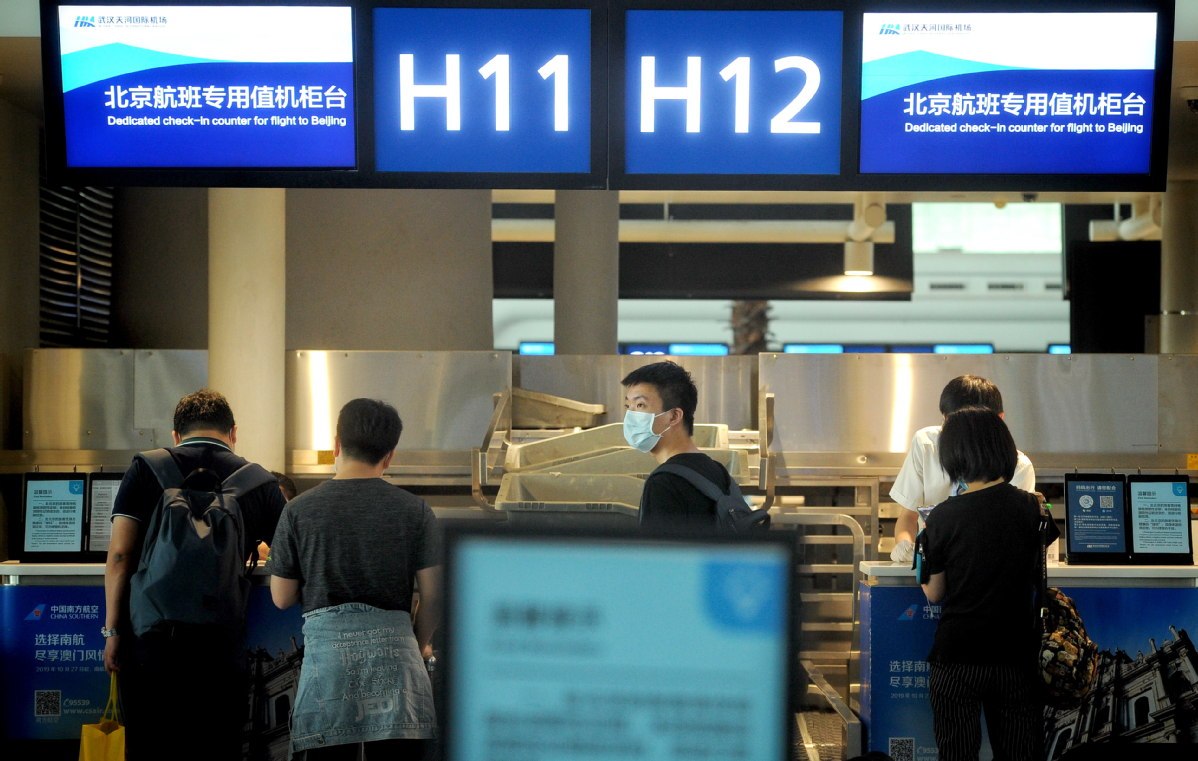 Passengers check in for a flight from Wuhan, Hubei province, to Beijing on June 9, 2020. [Photo by Xiao Xi/For China Daily]

China's civil aviation regulator will scale up flight safety supervision during the ongoing summer travel season, following two recent mechanical problems during flights, both of which caused no injuries.

The Civil Aviation Administration of China on Thursday released the results of investigations into the two incidents, and found no fault with the airlines' emergency procedures.

On Sunday, a Shenzhen Airlines' Airbus A330-343 lost cabin pressure at 9,200 meters during a flight to Xi'an, Shaanxi province, said Wu Shijie, the CAAC's deputy director of aviation security.

The pilots followed procedure and descended to a safe altitude before flying the airbus to the airport of its origin in Shenzhen, Guangdong province.

The crew acted "correctly and properly" during the whole process, and no one was injured, he said.

The loss of pressure was caused by the failure of a seal on a cargo door, the CAAC found.

In another incident on Sunday, a flight instrument on China Eastern Airlines' Airbus 330-243 displayed a malfunction while flying from Chengdu, Sichuan province, to Beijing, Wu said.

Due to the rainy weather in the nation's capital, the pilots landed the airbus in Xi'an as a precautionary measure. A fault in the flight instrument display had given an incorrect reading on the status of one of the engines. The part was later replaced and the display began operating normally again, Wu said.

He said the two mechanical failures have a "certain probability of occurring", but the pilots were able to handle the emergencies correctly to ensure flight safety because they receive training every year that covers such emergencies.

"As air passenger numbers are on the upswing during the summer vacation, and many regions have entered the flood season and the thunderstorm season, flight operations have seen increased risks," he said, adding that the administration has been stepping up supervision to ensure flight safety.

Upholding the principle of "zero tolerance toward safety hazards", the administration has required airlines, airports and relevant departments to launch thorough inspections to guarantee smooth and safe operations.

China's civil aviation industry had maintained 119 months, or 84.9 million flight hours of continuous safe flight operations by the end of July, according to the administration.