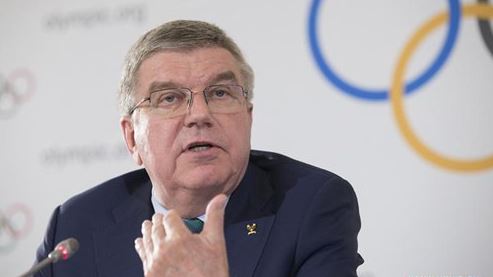 Bach is a former member of the German Olympic fencing team and visited China last month as IOC president for the launch of the Olympic mascot. In Beijing, he met the top Beijing 2022 organizing committee and government officials.

He was interviewed by Xinhua at the IOC headquarters in Lausanne and was asked to evaluate China's preparatory efforts for the winter Olympics which will be held in China for the first time in 2022.

"There are also many efforts undertaken pointing to the future of the Olympic Games in particular about the sustainable organization of the Games."

He noted that the "Ice Cube" as it will be called by then, and many other venues of 2008 would be used in a very different context as a "great symbol of the Olympic legacy."

In December, the Beijing Office for Major Projects announced that the iconic "Water Cube" used in the Beijing Summer Olympics had undergone a dramatic transformation into the "Ice Cube."

It is set to host the curling events for the Beijing 2022 Winter Games.

Bach said that China has many of the people who were involved in the 2008 Summer Games included in the 2022 Winter Games "benefitting from their experience."

The Water Cube, or the National Aquatics Center, along with the Bird's Nest, are the two most symbolic legacies of the 2008 Beijing Summer Olympics.

The Water Cube staged the swimming and diving events.

When the transformation is complete, the Aquatics center will feature a transferable rink for curling events in 2022.

Asked to elaborate on what he meant by sustainable organization, Bach said, "It also means that future generations will greatly benefit from the organization of these games in many different respects.

"You will see, for instance, the transformation of Shougang, from a steel mill to a neighborhood from which many Chinese people can benefit, for leisure, for information, for sport, for housing - you name it."