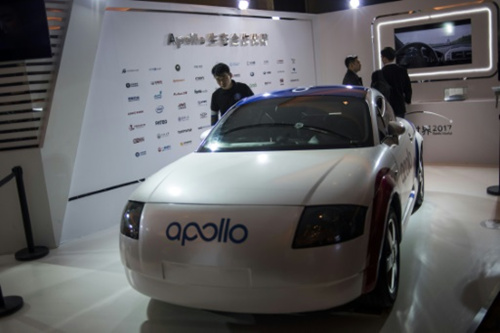 Baidu in September established a $1.5 billion fund dedicated to developing driverless cars and is getting set to launch its first models. (Photo: Fred Dufour/ AFP)

In court filings, Baidu demanded US-based Jingchi Inc., a start-up founded by the former manager of its autonomous driving unit, stop using its technology to develop autonomous cars, according to zhichanli.cn, a website focused on intellectual property and technology innovation.

The tech giant is seeking 50 million yuan ($7.61 million) in compensation, the website said.

Jingchi Inc. was founded in April and raised $52 million in September to expand its research and development of autonomous driving technology.

"Baidu's lawsuit has no factual basis and our lawyer will respond to it factually and legally," Jingchi's CEO Wang Jing said in a reply to Tencent news, adding that the company is an "indisputable pacemaker" in China's self-driving car sector.

Baidu told AFP that it would not comment on the case now that it was subject to judicial process.

The search giant established a $1.5 billion fund in September dedicated to developing driverless cars, and is getting set to launch its first models.

But it can expect strong competition from Jingchi, which has said it will move its headquarters to China and plans to "demonstrate technological strength in two weeks", according to Tencent news.