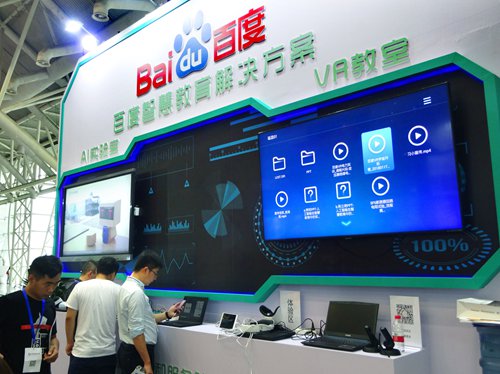 China's Baidu Inc and US-based Intel Corp said on Tuesday they will establish a 5G+AI lab to promote the research and development of mobile edge computing (MEC) in China, according to a statement Baidu sent to the Global Times.MEC is a key technology that will shorten latency in 5G development, and the technology could enable machines to respond in a faster manner.The deal points to the fact that cooperation among Chinese and US technology companies will not be hindered by the bilateral trade dispute, and only through cooperation can both sides achieve breakthroughs in developing new technologies, industry insiders said on Tuesday.And given the interdependence between the two countries, if the US seeks to hinder China's development in high-tech, it could also hurt US companies at home, they noted.Under the deal, Baidu and Intel will fully unleash each other's advantages in technology and application development, in a bid to explore various sectors such as AI, 5G, online translation and the Internet of Things.Xiang Ligang, chief executive of telecom industry news site cctime.com, told the Global Times on Tuesday that this deal is an example of how "trade tensions between China and the US won't hinder cooperation in the high-technology industry," since the two are interconnected and rely on each other."With China's overall strength in the 5G industry, US tech companies have to cooperate with their Chinese counterparts to further develop the technology and apply it to daily life," Xiang said. Intel also unveiled new developments across the 5G value chain at the Intel 5G Network Summit in Beijing on Tuesday, indicating its ambition of gaining a further foothold in China, alongside a powerful ecosystem of industry leaders. These companies included Baidu, China Mobile, China Telecom, China Unicom, H3C, Huawei, Tencent, Unisoc and ZTE.Xiang said that China offers a large-scale application scenario and a vast user base, so if US technology companies want to improve users' experience and grab the attractive Chinese market in the coming 5G era, they have to test their products locally.Another industry insider surnamed Liu said that if the US wants to suppress China in terms of technological development, then it is also  hindering the development pace of technology companies at home. Liu said that the two are closely connected in the industry chain - not only in trade, but also in the high-tech sector."Even if the US blocks China in some sectors where China lags behind, it will only accelerate domestic companies' efforts. That's how domestic chip giants like Huawei Hisilicon grow stronger," Xiang said, adding that China is no longer at a time when it had no technology at all."We have our strengths and the US companies have theirs, and only through cooperation can the two make breakthroughs in developing new technologies in the coming 5G era," Xiang noted.