A police dog in China went viral online recently after a photo of it with a ban-aid on its face was posted on Chinese social media. 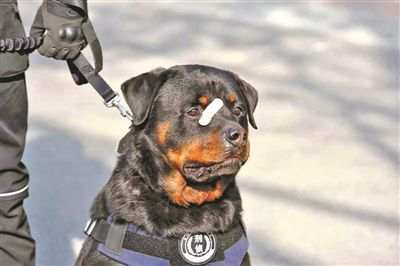 The photo of the 8-year-old dog nicknamed Buffalo touched many, with even the Criminal Investigation Department of China's Ministry of Public Security joining in on the satire by saying scars are the badge of a real "man".

According to Gao Yu, Buffalo's trainer, it was during the preparation training for a national police dog competition that Buffalo was injured in the face by an iron mask that had been put on its face for safety measures. After simple treatment, Gao placed a band-aid on Buffalo's face.

Seeing this scene, another trainer on site took a picture of the dog and posted it on Chinese social media platform WeChat, where many took it as cute. Some even joked that their hearts were bleeding after they saw the sadness and toughness of Buffalo.

Many people visited Buffalo after it became an online celebrity and requested to take photos with it, even including the trainers of Buffalo's "comrades-in-arms".

However, the fame has brought nothing to the tough dog, and Buffalo is still the old Buffalo who eats two meals a day and completes regular training.

"Bleeding and skin trauma are trivial to Buffalo," Gao said, adding that injuries are very common during the training of police dogs. Buffalo has been injured many times and most of these injuries were more severe and band-aids were far from enough for treatment, he introduced.

Before Buffalo went viral, it had even played a role in a Chinese TV drama in 2015, something that has been left unknown till now.

Buffalo is a Rottweiler from Germany. During its 8-year service as a police dog, it has participated in a number of major police cases.

Now it is about 50 years old in human age, and will be retired soon. Gao said that he was planning to adopt Buffalo after its retirement and have it stay with him at the police dog training base.