CHINA Band thanks organ donor who changed their lives

Band thanks organ donor who changed their lives 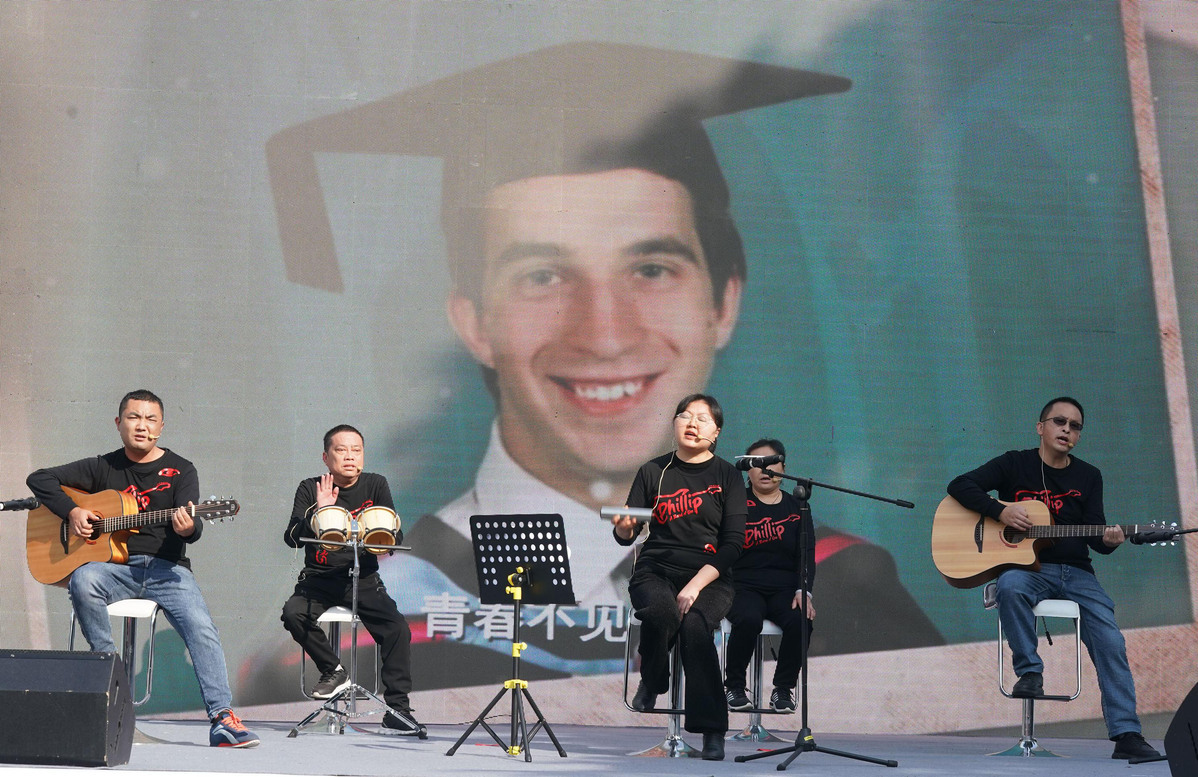 The Band for One, made up of five people who received donated organs from an Australian teacher who died in Chongqing, performs in Hangzhou, Zhejiang province, on Nov 7. (Photo: China Daily)

Former truck driver Chen Xianjun strummed a final chord on the guitar as he and his four bandmates－a real estate salesperson, a farmer and two doctors－basked in the sunshine of early winter by West Lake in Zhejiang province.

"Cherish your right to own life," Chen sang in his song's last line. Behind him, the photo of a foreigner wearing a giant smile while hugging his guitar was projected on the screen, capturing onlookers.

It was the 27-year-old man in the picture, Philip Hancock, an Australian who taught English in Chongqing, who made the scene of warmth and vigor come true.

Hancock died in May 2018 in Chongqing from complications of diabetes. His parents, who flew from Sydney to Chongqing to bid farewell to their son, had been aware of Hancock's wish to donate his organs after death.

With the help of the Red Cross Society of China's Chongqing branch, they signed the donation pledge.

Hancock's liver and kidneys saved the lives of three people in the band and his corneas restored the eyesight of the other two, including Chen.

"Last year, Red Cross officials got in touch with us, proposing that the five of us form a band in memory of Hancock," Chen said. "They told me that Hancock's parents mentioned during an earlier memorial service that he loved music and dreamed of having his own band one day."

Chen said he was on board instantly, and so were the rest of the recipients of Hancock's posthumous gifts.

"I am more than fortunate to be able to regain my eyesight, and to be able to pay tribute to the man who gave me a second chance at a full life and maybe bring some comfort to his parents－such an opportunity is beyond my dreams," he said.

In the past year, the five aspiring musicians learned their assigned instruments from scratch and kept practicing at home. They traveled from different parts of Chongqing and neighboring Sichuan province several times to meet in a Chongqing studio for lessons and group rehearsals.

Mo Li, a 36-year-old property salesperson who received one of Hancock's kidneys due to severe uremia, said she thought she had no musical talent until she began shaking the maracas to the beat.

"Picking up a new instrument is certainly difficult at my age, but we have a clear goal in mind and are determined to achieve it," she said. "I think Philip not only gave me a renewed life, but also some 'musical cells' that enable me to appreciate beautiful melodies."

Tan Daobi, 53, who had spent years in darkness due to chronic keratitis until Hancock's cornea brought light back into her life, said she feared being a drag on the band.

To catch up, she worked to squeeze training in between her daily chores of farming and cooking in her countryside home and is now able to play with more confidence.

"I practiced with one hand while I was watching TV and building a fire in the wood stove," Tan said. "I do not want to be the one who lags behind, and I want to make Philip proud."

Wu Jun, the 40-year-old surgeon who received Hancock's liver, played the guitar and Chen Jingzhong, 50, the recipient of Hancock's other kidney, played the drums.

The Band for One, a fitting name for the five-member group, was scheduled for their first public performance at an organ donation memorial service in March, but their debut was delayed due to the COVID-19 pandemic.

On Nov 7, they finally gathered by the willow-shaded lakeside in Hangzhou to celebrate the 10th anniversary of the implementation of voluntary organ donations in China, along with hundreds of Red Cross workers, transplant recipients, family members of organ donors and volunteers.

"I was nervous before stepping on the stage, worrying that I might place my hands in the wrong positions or forgot the lyrics," guitar player Chen Xianjun said. "But I think we all played our parts to the best of our ability after so many months of preparation and tension."

Chen said all the recipients now have the ability to carry on with their lives, and that's exactly what Hancock's parents wanted for them.

Peter Hancock, the donor's father, said in an interview in October after watching a livestreamed studio performance of the Band for One, said his biggest wish is for the five to enjoy their lives more.

"What I would like for you to do now is to stay very safe and look after your body very well," he said. "And more importantly, get on with your normal lives in as far as what you were doing before the surgery and before what's happened."

Chen said he cannot return to driving a truck because his eyesight does not meet the requirements. Instead, he opened a tofu-making business and is grateful to be able to make a living by his own hands again and support his family.

According to the Red Cross Society of China, Hancock was the first foreign organ donor in Chongqing and the seventh in the country. Since China initiated voluntary post-mortem organ donations a decade ago, about 31,300 people have donated their organs after death, including 11 foreigners.

Zhou Xueyue, director of Chongqing's organ donation administrative center, said Hancock's story shows the value of signing up as an organ donor and relaying that intention to family.

"If Philip had not registered in Australia and his parents had not known about his decision, the lives of these five people could be totally different now," he said.

According to the Red Cross Society of China, the number of registered organ donors has been rising fast in recent years, recently reaching 2.51 million.