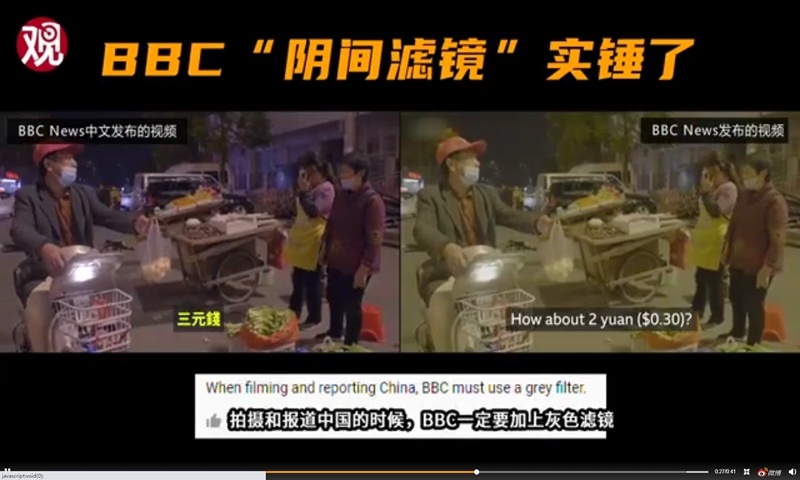 BBC News posted Chinese and English versions of a video titled "How everyday life has changed in Wuhan" on Youtube. Although the two versions have the same content, netizens found that a filter was added to the English version that made the footage more greyish. Photo: screenshot of video posted by guancha.cn on Sina Weibo.

A BBC video depicting Wuhan's recovery from the COVID-19 outbreak has drawn ire from Chinese netizens for adding a greyish filter in its English version, turning scenes of vivid colors into a seeming "bleak underworld," and prompting many to question the news outlet's integrity after what was seen as a deliberate attempt to manipulate the opinions of its viewers and discredit China.

Last December, BBC News posted Chinese and English versions of a video titled "How everyday life has changed in Wuhan" on Youtube. Although the two versions have the same content, netizens found that a filter was added to the English version that made the footage more greyish.

It soon drew a backlash among the public, with many questioning the BBC's intention in using such a trick. "Is it just me or are you using some kind of filter to make the colors in this video look old and give us a sense of the city looking poor?" read a comment. The comment has gained nearly 250 thumbs-up as of press time.

The topic "BBC using an underworld filter" has been trending on China's Twitter-like Sina Weibo in recent days. Some said that the depressing filter made the video look like a horror movie, while others point out that this is how double standards work in the West.

In a video, Damo Uncle showed how he used shots of garbage dumps, burning fires, symbols of infectious waste at an unknown location and vehicles in a queue to support a narrative of human experiments, virus leaking from labs and traffic jams due to people fleeing their homes.

To make it more convincing, he used editing programs to change the lighting of the clips, giving them a "hellish" touch.

China's National Radio and Television Administration has barred BBC World News from airing in China, it announced on February 12, saying some of its reports on China infringed on the principles of truthfulness and impartiality in journalism.