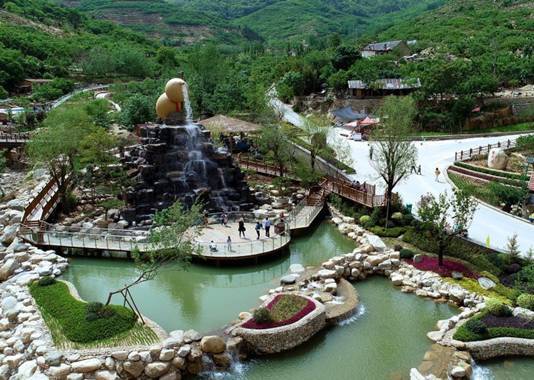 With years on a farm stay project at Chunshugou village, Duozhuang town of Linyi in East China's Shandong province, Han Caihou concluded he made the right choice in returning to his hometown to start up the project.

The 33-year-old said his income from running the farm stay is much better than that from working in a city.

"Great changes have taken place to our village. The living environment is clean and healthy, which attracts a lot of tourists. Local government is helping us run business and expand the market to sell our agricultural products," said Han.

During the past five years, the village has been putting efforts on improving its infrastructure, including widening the roads and dealing with sewage and garbage, said Gong Picui, a Duozhuang town official.

With subsidies for revitalizing rural areas, the town government has built public facilities to attract tourists.

"Tourists can taste fresh spring water originating in the mountains and go rafting, as well as pick agricultural products from our farmland," said Han, adding very much children like the rural environment at his village.

Last year, the village attracted over 500,000 tourists, according to the town government. The tourism projects have lifted 498 villagers out of poverty.