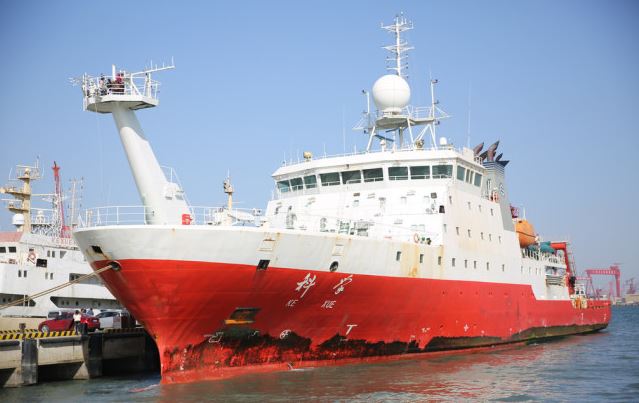 China has achieved real-time transmission of deep-sea data at 6,000-meter depth through its self-developed BeiDou satellites for the first time, a move essential to more secure, independent and reliable deep-sea data transmission.

China's most sophisticated research vessel Kexue (Science) returned to the eastern port city of Qingdao on Thursday after wrapping up a 74-day, 12,000-nautical mile expedition. During the trip, Chinese scientists maintained and upgraded the country's scientific observation network in the West Pacific, according to the Institute of Oceanology under the Chinese Academy of Sciences (CAS).

Researchers replaced batteries on 20 sets of submersible buoys on the network, optimized their positions and installed BeiDou satellite communication modules in them.

As the low-volume submersible buoys powered by batteries can only be retrieved once a year, the communication modules were designed to be tiny, power saving and run steadily.

"The data collected by the submersible buoys, including the temperature, salinity, flowing speed and direction of seawater, should be transmitted back to the ground lab by satellites. The amount of data was huge," said Wang Jianing, a researcher at the institute. So they developed multi-module communication and transmission technology, greatly lifting transmission efficiency.

The breakthrough research vessel Kexue made changed the situation. Before, real-time observation of marine data had relied on foreign remote sensing satellites. Now there was improved data transmission security and reliability, according to Wang Fan, director of the Institute.

China began to establish the real-time scientific observation network in the West Pacific in 2014, and realized real-time transmission of deep-sea data in 6,000-meter depth in this expedition, with the depth range extending from 1,000 meters in 2016 to 3,000 meters in 2017.

There are 20 sets of submersible buoys, four sets of large floating buoys and some pieces of on-board mobile observation equipment in China's observation network for scientific research over the tropical West Pacific, which has acquired deep-sea data for five consecutive years. Wang said the data could enhance the precision in ocean climate and environment forecasts.

The tropical West Pacific is home to the world's most sophisticated waters, with the strongest interchange of energy and materials between earth and the ocean.

It has a close connection with the occurrence of El Nino and its duration, which has a significant influence on floods and droughts in China. And the El Nino weather phenomenon, characterized by a warming in the Pacific Ocean, has a profound impact on extreme weather conditions, according to the institute.

Kexue started its first expedition in April 2014 and has fulfilled several missions in the West Pacific Ocean and the South China Sea, with a more than 250-day voyage every year.