Beijing adopts ‘14+7’ policy, extending quarantine period to up to 3 weeks 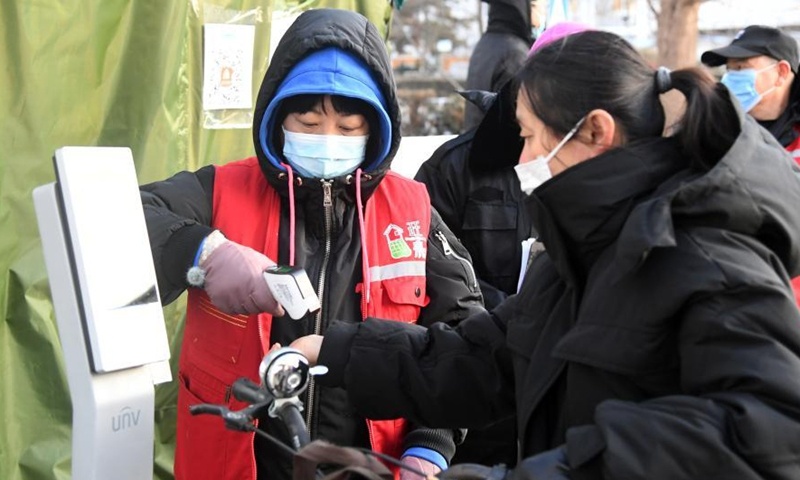 A community worker (L) measures body temperature for a resident at the entrance of the Hongcheng Huayuan residential compound on Wangquan Street, Shunyi District, Beijing, capital of China, on Dec. 29, 2020. (Photo: Xinhua)

Beijing tightened its quarantine and medical observation measures for travelers from outside of the city, requiring observation period for arrivals from overseas, which is 14 days, to be extended by another seven days if environment or people on their flights tested positive.

The new measures came after several Chinese cities including the capital reported domestic cases caused by imported cases that were confirmed after the 14-day quarantine period.

According to the measures published by Beijing government officials at Tuesday's media briefing, arrivals from overseas have to undergo a seven-day observation after completing 14-day concentrated quarantine if environment or people on their flights tested positive after the plane landed or during their quarantine. During the seven-day observations, they are not allowed to attend gatherings.

For overseas travelers who enter China through other cities but wish to go to Beijing, they are allowed to enter the capital 21 days after they enter China. If they plan to visit Beijing within 21 days, they have to report their personal information 72 hours prior to their arrival and undergo seven-day observation in Beijing.

Xu Hejian, spokesperson for the Beijing municipal government, said at Tuesday's media briefing that the measures were put in place to prevent infection risks caused by long incubation patients.

Beijing's Shunyi district, where Beijing Capital International Airport is located, will adopt the "14+7" quarantine measure for close contacts of confirmed cases, after the district reported 28 cases in the fresh outbreak, with some cases having an incubation period longer than 14 days, Zhi Xianwei, a senior government official of Shunyi, said at the press briefing.