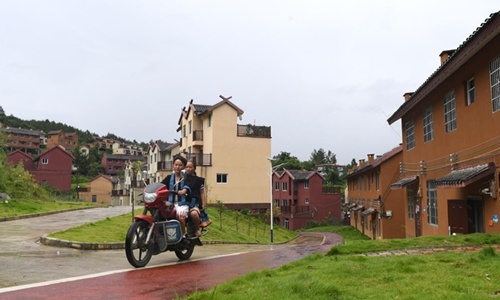 Villagers ride a motorcycle on the road of a resettlement area in Nandan County, south China's Guangxi Zhuang Autonomous Region, on Aug. 6, 2020. Since 2016, Guangxi has promoted the construction and improvement of rural road network, with 52,900-kilometer roads built to link villages in rural areas. (Photo:Xinhua)

Authorities in China's capital city of Beijing have officially set up the Beijing Rural Revitalization Bureau on Monday, as part of the national strategy to promote rural development and modernization of the country's vast rural areas — which are critical to the overall development of Chinese society.

The release comes ahead of the official implementation of Rural Revitalization Promotion Law, which is set to come into effect on June 1.

China has set rural revitalization and the consolidation of poverty relief achievements, among others, as priorities for this year's rural work agenda.

The new bureau, which is under the administration of Beijing Municipal Bureau of Agricultural and Rural Affairs, is responsible for promoting local strategic projects concerning rural vitalization.

The set-up also marks a practice to implement national strategy and an important event in the development of "agriculture, rural areas, and rural residents" in Beijing city, the Beijing Daily reported on Monday.

The bureau will lead the work to explore a road of rural revitalization with Beijing's local characteristics, carrying out the designed models of "big city - small agriculture" and "big suburb - small districts," so as to achieve the goal of helping agriculture developed in an efficient and streamlined way, making countryside attractive places to live and work, and ensuring rural residents and farmers enjoy a higher standard of living, the report said.

The ultimate goal of rural revitalization is to "build a modern, socialist country that is prosperous, strong, democratic, culturally advanced and harmonious" by the time the People's Republic of China (PRC) marks its 100th founding anniversary in 2049, media reports said.