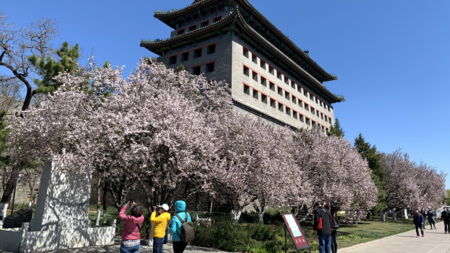 BEIJING, April 29 (Xinhua) -- The Chinese capital will lower its emergency response to the novel coronavirus epidemic from the top level to the second level starting April 30, a local official announced Wednesday.

The decision was made after the city had seen no new confirmed local or imported COVID-19 cases for 13 consecutive days, said Chen Bei, deputy secretary-general of the Beijing municipal government, at a press conference.

On Jan. 24, Beijing activated the highest level of public health emergency response to contain the outbreak of the epidemic.

After the response level is downgraded, people from low-risk regions of China will not need to be quarantined for 14 days at home upon arriving in Beijing, she said. Those who are undergoing concentrated or at-home observation need not continue.

But the strict management of inbound personnel and those from high- and medium-risk areas and Hubei, the province once hardest hit by the virus, will continue.

Couriers, deliverymen, housekeepers and real estate agents will be allowed to enter residential communities if their health codes are green, Chen said.

Rong Jun, spokesperson of the Beijing Municipal Commission of Transport, said under the latest emergency response level, the maximum allowable passenger capacity will be raised from 50 percent of full capacity to 75 percent on buses and to 65 percent on subway trains.

Bus services between Beijing and some areas in the neighboring Hebei Province will resume operations in an orderly manner, and inter-provincial long-distance and chartered bus services will gradually be resumed, he said.

The buses and subway carriages need to be disinfected and ventilated regularly and all passengers are required to wear masks and have their temperatures taken.

"Despite the adjustment, the prevention and control measures in Beijing remain the strictest," Rong said.