CHINA Beijing eatery offers A special meal for those in need

Beijing eatery offers A special meal for those in need

A note letting customers know that an eatery in Beijing’s Chaoyang District is offering free meals for needy people has melted the hearts of Chinese citizens, Beijing Daily reported. 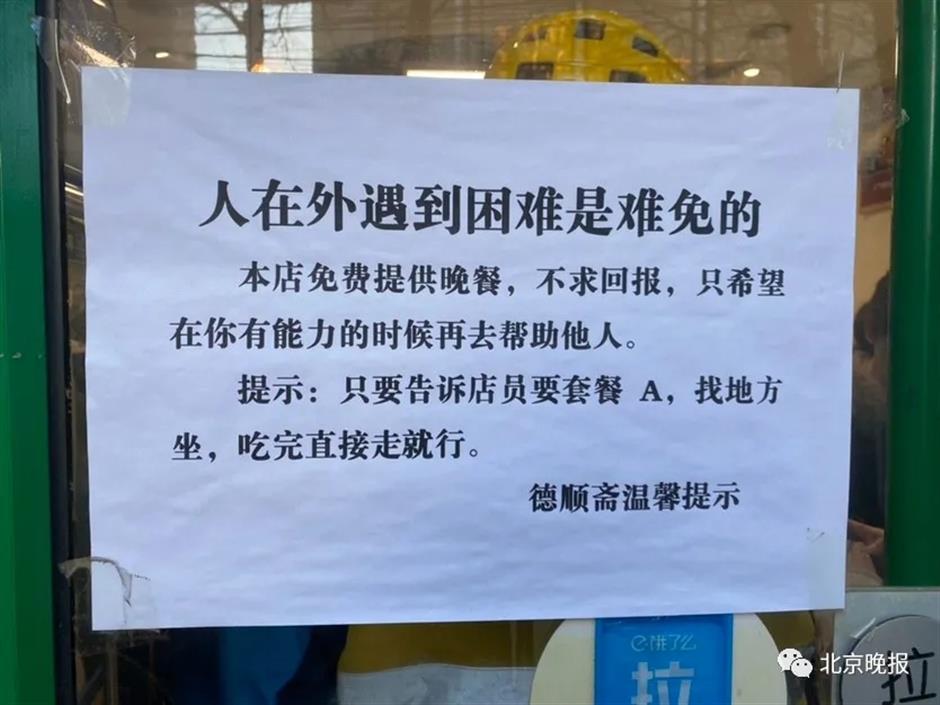 The note on the snack bar offering free meals for the needy.

The note issued by Deshunzhai reads:”It is inevitable for people to encounter difficulties when away from home. Our restaurant provides dinner for free and we don't ask for anything in return. We only hope you help others when you're capable. Tips: Just tell the clerk you need set A, find a place to sit, and leave directly after eating."

Ma Zongxian, a man in charge of the eatery, said they got the idea after a special "customer" came in October. The "customer" never ordered any food, only eating leftovers on tables and cleaning the dishes after eating.

"We offered to give him some steamed buns but the man rejected this and said leftovers were enough," Ma said.

As the weather was getting colder, Ma discussed with owner Yu Chenghao the idea of providing free dinners for people in need. In consideration of their dignity, they set up a "secret signal” of set meal A — a bowl of beef noodles which originally cost 22 yuan (US$3.37).

Ma said: “I hope they feel warm after eating the hot noodles and overcome the hard time in life."

The note was issued at the end of October and by now only one customer had ordered for it. However, countless people were touched by the notice and wanted to donate meal A to those in need. Their kindness was thanked but refused by the snack bar as Ma said it could afford it.