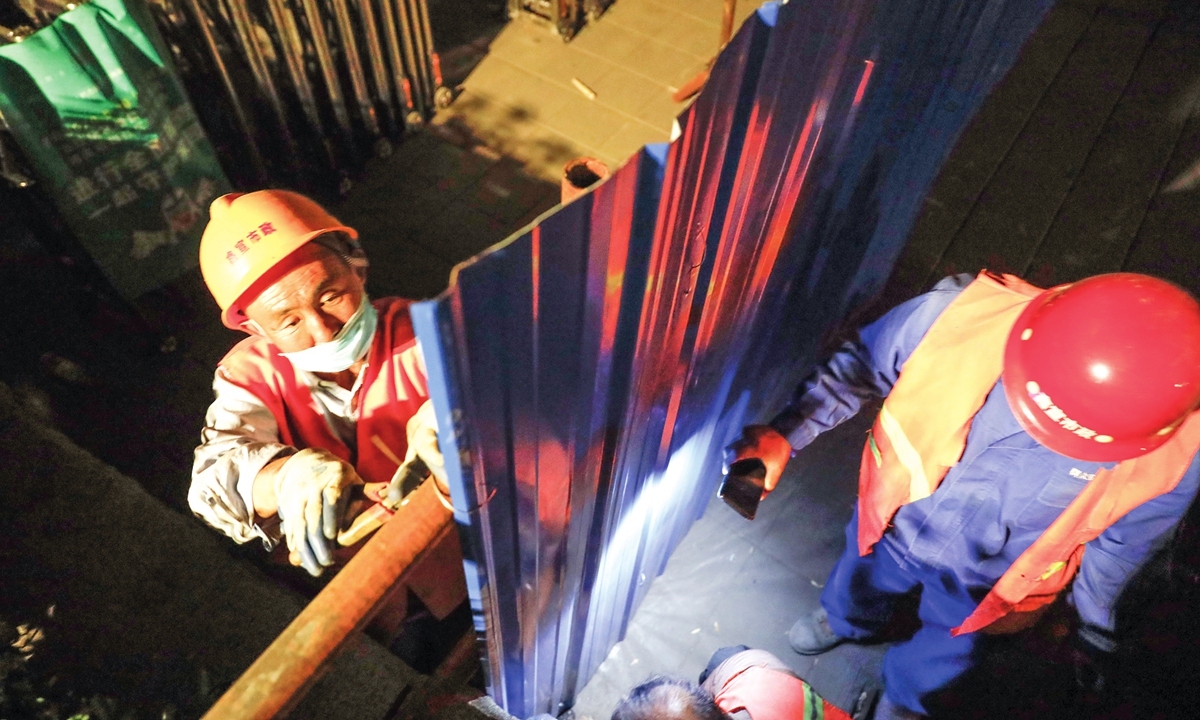 Workers install fences at the Shichahai scenic spot in downtown Beijing on Monday night to cordon off the area. Several districts in Beijing have upgraded their public health emergency response to Level II after a new COVID-19 outbreak began at a wholesale seafood market in Beijing last week. (Photo: Global Times)

All communities in Beijing entered the "wartime management mode" on Monday as the capital city undertakes strict prevention and control measures following the latest outbreak of COVID-19 cluster that was first detected at a local seafood market in the city's Fengtai district.

Facing growing uncertainties, central and local-level officials urged the public to remain on high alert due to the long duration and complexity of the situation, considering the virus' mutation, unclear origin of the infection cluster and unknown transmission routes.

After reporting zero new cases of coronavirus infections for 56 consecutive days, Beijing reported 79 cases related to Xinfadi - a large wholesale food market - between Thursday and Sunday including one critically ill patient and two severely ill, as the official data showed. As of Monday, some 7,200 residential communities, including villages, have all entered "wartime mode" with nearly 100,000 epidemic control staff deployed to help prevent the virus from further spreading throughout the capital.

Chinese Vice Premier Sun Chunlan, who has fought the epidemic for months at the frontline in Wuhan, the hardest-hit city in Central China's Hubei Province, said on Sunday that the risk of the Beijing epidemic spreading is very high as the Xinfadi market is densely populated and highly mobile, leading to hugely potential risks of a further spread.

Local officials were urged to take resolute and decisive measures to effectively prevent the spread of the epidemic. Meanwhile, Xinfadi and surrounding areas should be made a priority in conducting epidemiological investigations and carrying out in-depth and comprehensive source tracing, the vice premier said.

"The resurgence of cases sounded the alarm to us, with Xinfadi being a large food market that supplies a large proportion of Beijing's fresh vegetables, recording a high level of daily traffic, which is part of the reason behind such a severe situation," Wang Peiyu, deputy head of Peking University's School of Public Health, told the Global Times on Monday.

The latest epidemiological survey, taking into account nucleic acid test analysis from key areas and targeted groups, showed the latest cluster infection is highly related to the Xinfadi market, Xu Hejian, spokesperson of the Beijing Municipal Government, told a press conference on Monday. "At present, we have not fully grasped the transmission route of the virus. Also, the epidemic is still spreading overseas, so the situation in the capital is very severe," he said. 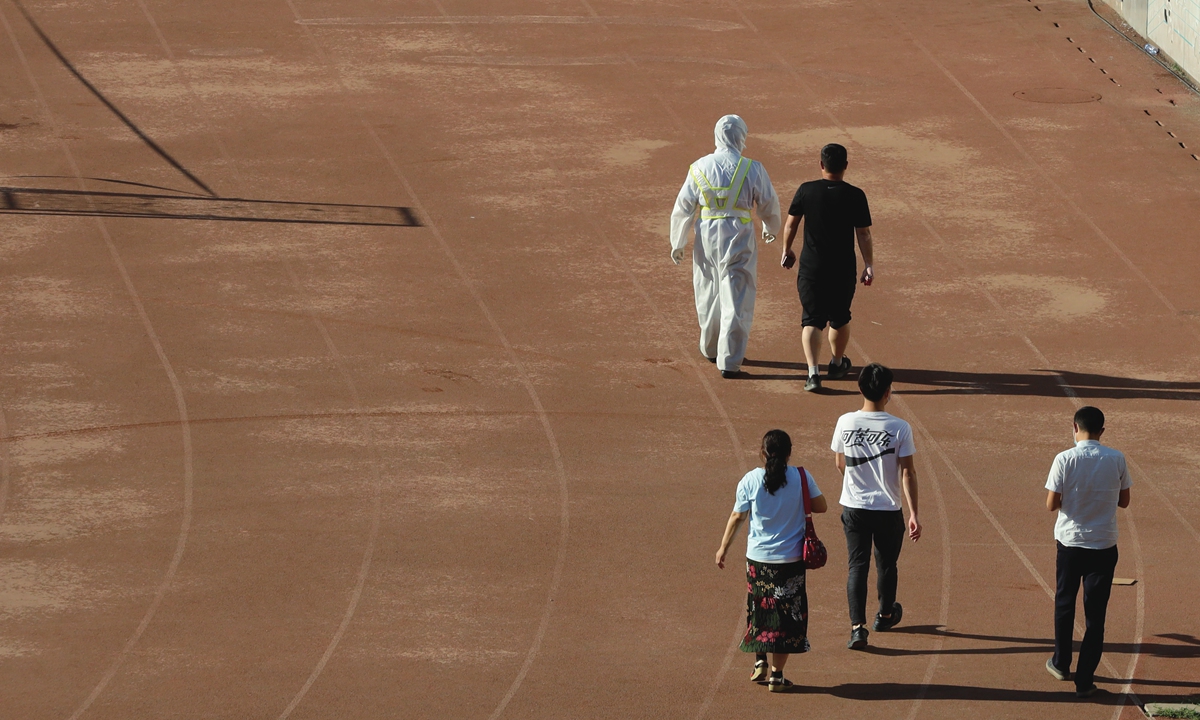 Residents follow a health worker to a testing station at a sports center in Xicheng district after Beijing municipal government demanded all residents who visited the Xinfadi food market since May 30 to undergo nucleic acid tests for possible infection with the novel coronavirus after the city reported 51 confirmed COVID-19 cases as of Sunday. (Photo: Global Times)

Among 36 newly reported cases on Sunday, 34 were related to Xinfadi market while the other two were still under epidemiological investigation, according to Beijing's Centers for Disease Control and Prevention on Monday. Five of the confirmed patients are from Fengtai's Huaxiang neighborhood, rendering the area high-risk, which is also the only one in the country.

Xu also noted that local authorities have been conducting the strictest epidemiological investigations in order to find the origin of the infections and to contain the further spread. As a result, all communities have launched "door-to-door" information collection to screen out suspected contacts and confirmed patients connected to Xinfadi.As of Monday, Beijing has screened nearly 200,000 people who recently visited the Xinfadi market, with all required to take nucleic acid tests and self-quarantine at home for further observation.

There is a mixture of good and bad news from the latest rebound of COVID-19, said Shanghai-based infectious disease expert Zhang Wenhong in a post shared on social media on Sunday. The bad news is the market has a huge turnover volume, and it's still unknown if there will be more outbreaks later.

Besides Xinfadi, Yuquandong, another market in western Beijing's Haidian district, also reported a new confirmed patient on Sunday, putting 10 neighboring communities into strict lockdown. Schools in those areas have suspended resumption of a large part of classes. Around 6 pm on Monday, Honglian market in Beijing's Xicheng district also reported one new case, forcing the market to suspend services.

As of Monday, at least 21 communities in the vicinity of the two markets that reported new COVID-19 cases have undergone seal-off management while 90,000 local residents were required to take nucleic acid tests.

A local resident surnamed Hao who lives in a residential compound just across the street from Xinfadi told the Global Times that the local residents were told not to leave their homes and all of them accepted nucleic acid tests on Sunday after four confirmed cases were found there. Community management workers are in charge of delivering food and daily necessities to the area that has been completely sealed off.

"We aren't panicking because we strictly follow epidemic prevention and control measures, we know what to do," he said, noting that compared to the early stage of the outbreak in February, everyone is doing their best to make efforts in containing the viral spread.

The Global Times talked to a dozen of Beijing residents from different districts including Haidian, Chaoyang and Fengtai, and a large majority of them believe that the Wuhan scenario won't repeat in Beijing, referring to a 76-day unprecedented city lockdown of the city, an important transportation and manufacturing hub.

However, there were still a few residents who said that they feel nervous about the resurgence of the COVID-19, with more subsequent cases in the future, considering some key questions including the origin and transmission route remaining unanswered.

"Looking at epidemic-related news alerts showing up one by one on my phone, my mood for the past two days has been quite poor. It seems like I just walked out from the shadow into the bright day, but now have returned to the shadow again overnight," a Beijing local resident surnamed Huang said. He noted that the latest outbreak in the Chinese capital is highly likely caused by a virus from overseas.

"No matter how much effort we make in China, given the current situation around the globe, it's hard to fend off all the risks. I feel powerless, the virus is so cunning," she said.

"Not even back in the beginning of the year, when the virus first spread across the country, did it make me feel like the threat is right next to you," A Fengtai district resident surnamed Liu said. He said thatthe Xinfadi market is a place that so many people in Beijing have a connection to, and he feared the impact may be bigger than a majority of people have expected.

"I now worry not only about having contacts with other people, but also about food I'm buying and consuming, which didn't happen before this," said a housewife who also lives in Fengtai district.

Compared to the outbreak in the early stages at Wuhan's Huanan seafood market, the virus in Beijing has become more contagious and pathogenic, as more than 70 cases were detected within two days, said Yang Zhanqiu, deputy director of the pathogen biology department at Wuhan University.

From the end of December to January 17, the total reported confirmed cases in Wuhan were 62, close to the newly reported infections in Beijing right now with Beijing diagnosing 79 patients in four days given the large number of test samples and technical means, Yang noted. Also, the outbreak in Wuhan was in the cold winter, which was conducive for the viral spread. But now, Beijing is in summer with high temperatures," he said, noting that a quite significant amount of early patients in Wuhan didn't have any history of exposure to the Huanan market.

Based on all the aforementioned factors, he told the Global Times that the infectiousness of the virus could be enhanced or weakened, but in this case in Beijing, it is stronger than that of Wuhan.

Several prominent medical experts who have played crucial roles in fighting COVID-19 in the past few months all expressed strong confidence in winning this new battle in Beijing. Some also said that the situation now is "preventable and controllable."

"The good news is that all cases are related to Xinfadi market with no other transmission routes seen, which also indicate that prevention and control work is still at the early stages of the viral spread," Zhang was quoted as saying in the post.

Beijing is very big with a large geographical area and a large population. The area involved in the epidemic is very small, and the rest is safe, Wu was quoted as saying in media reports.

"Given the current situation, we should track and manage people relevant to the transmission chain, which is the most important step in cutting off the spread," he said.

Beijing sounded the alarm immediately after the outbreak, narrowed down the target areas and took decisive measures, we are confident that the situation is controllable, Wu noted.

In the wake of the clustered infections at Xinfadi market, Zhou Yuqing, deputy head of Fengtai district, Wang Hua, Party chief of the Huaxiang subdistrict in Fengtai, and Zhang Yuelin, head of Xinfadi market were removed from their posts. Zhou became the first district-level deputy head in Beijing who was punished due to failed epidemic prevention work.

Top-down officials have already drawn lessons from epidemic prevention work over the past few months, which also guaranteed the community-level implementation of strict and effective prevention measures in fending off the rebound.

While some experts lauded Beijing's reaction being faster than that of Wuhan, it was still hard to make any prediction for whether the second wave would come, as the virus transmission route may be abnormal within which the virus could be transmitted through contaminated objects.

"Our major focus amid previous outbreaks was on human-to-human transmission, but this time it is on the contaminated environments or objects," Wang said.

The next three days will be critical for Beijing to handle the epidemic. The number of cases reported by Beijing in the last three days indicates to an overall evolution of the epidemic, Wu said, noting that if there isn't any significant increase over the next few days, the situation will be controlled on a certain scale.

Some experts also predicted that the next 20 to 30 days would be very crucial for Beijing to decide on whether to further raise its epidemic response level while the public is also advised to take precautions including wearing masks and washing hands frequently.