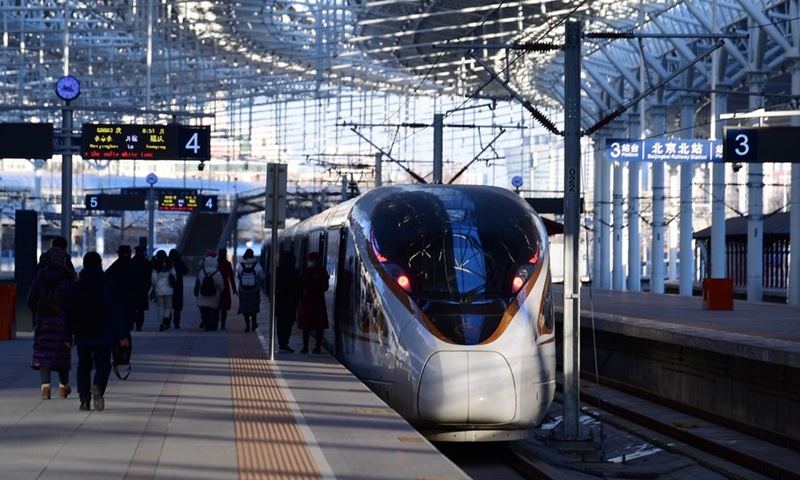 Meticulous checks at highways, lockdown of villages, encouraging work from home … these are part of the measures taken by Beijing, as China's political center and transportation hub is building what is like an "invisible wall" to ward off coronavirus onslaught from neighboring Hebei Province for the safety of the upcoming Spring Festival and planned two sessions meetings.

Five cases of infection were reported on Monday in Beijing, breaking the public impression that the outbreak in Beijing's Shunyi district was receding, while the capital city's guard against Hebei cases continues to escalate after the province that encircles Beijing reported more than 130 infections on Monday.

The family-clustered infections in Shunyi involving five patients prompted the district to lock down all villages starting Monday.

Fangshan and Daxing districts in southern Beijing are two regions which together have 95 villages connecting the capital city and Hebei. Fangshan on Monday announced nine highway checkpoints will inspect all vehicles and people who enter Beijing.

A checkpoint police officer who requested anonymity told the Global Times that people or vehicles that had been to Xingtai and Shijiazhuang, two epidemic-stricken Hebei cities, cannot enter Beijing even with a negative nucleic acid test certificate.

Those from other parts of Hebei need to provide a negative test result within 72 hours, and commuters who work in Beijing but live in Hebei near the border need a 14-day valid test result, said the police officer, adding that people who traveled past areas where COVID-19 cases were reported recently need to present seven-day valid tests.

Personnel in the transportation industry, including truck drivers, should take nucleic acid tests and make transactions in a closed-loop manner when they come to Beijing. Those who need to stay in Beijing overnight should be accommodated at designated places.

According to Beijing's epidemic control press conference, villages are heightening measures by patrolling to prevent people or vehicles trying to circumvent highways to enter Beijing. Those villages are also carrying out strict health code checks and registration rules to guarantee the wide rural areas will not be the Achilles' Heel of Beijing's control work.

Fever pills must be purchased with real names and local clinics were ordered to be more sensitive to possible cases, an official from Daxing district said at Monday's press conference.

Although commuters can go to their Beijing offices with a negative report and certificates proving they live in Hebei but work in Beijing, government advice and long queues at highway checkpoints due to meticulous inspections may persuade them not to do so.

But some employees may spare no efforts heading to their offices in Beijing as posts on social media suggested some commuters who were blocked by checkpoints skated on frozen rivers from Hebei to Beijing.

This unexpected channel does not escape control methods. Sanhe and Xianghe counties in northern Hebei issued notices that people are not allowed to skate, ice fish or conduct other activities on rivers due to epidemic control reasons and safety concerns. Crossing the provincial boundary on ice is also prohibited.

Wang Hongwei, a professor at Renmin University of China's School of Public Administration and Policy, told the Global Times on Monday that keeping Beijing safe is important, given its political significance and transport links across China.

Geographically, Hebei is like the egg white embodying two yolks — Beijing and Tianjin. If Beijing cannot guarantee safety, the epidemic may not only flare up in the capital, but also has higher risk of spreading across China.

Wang attributed the strict epidemic control measures in Beijing to uncertainties in the epidemic situation. Different from the previous outbreak in the Xinfadi market in June where the infection chain was clear, the capital city is facing the virus inside and outside: it has to protect itself from Hebei's outbreak while also fighting sporadic cases inside the city, mostly in Shunyi district.

To tackle the sporadic cases, the city introduced a circuit-breaker mechanism to taxi firms and car-hailing platforms on Monday, the first day passengers were asked to screen a QR code the way they enter a shopping mall.

Two car-hailing platforms, Didi and Huaxiaozhu, were punished for lax epidemic control and fined 1.07 million ($165,000) and 340,000 yuan, respectively. The two platforms said they are organizing drivers to get vaccinated in five days.

Earlier, the capital city also extended its quarantine period for overseas returnees to 14+7 days, 14 at medical observation centers and seven at home, for all personnel coming to Beijing to tackle international arrivals with longer incubation periods.