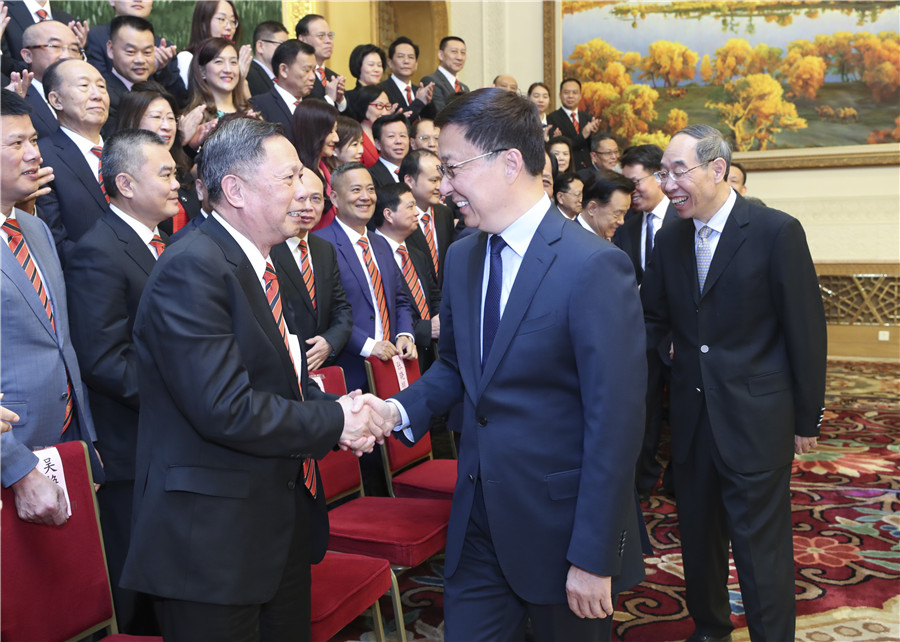 Vice-Premier Han Zheng, who is also a member of the Standing Committee of the Political Bureau of the Communist Party of China Central Committee, meets with representatives of the Hong Kong Federation of Fujian Associations on Tuesday in Beijing. (Photo: Xinhua)

Han made the remark while meeting on Tuesday with more than 100 representatives from the Hong Kong Federation of Fujian Associations in Beijing.

He said through the SAR government's efforts and a rational discussion among the people of Hong Kong, the city will eventually reach a consensus and any doubts over the issue will be dispelled.

Han, also a member of the Standing Committee of the Political Bureau of the Communist Party of China Central Committee, hoped that all sectors in Hong Kong will work together to safeguard the image of the city's rule of law.

The SAR government proposed to amend its Fugitive Offenders Ordinance and Mutual Legal Assistance in Criminal Matters Ordinance in March. The proposed amendments will allow Hong Kong to surrender fugitive offenders to jurisdictions with which it does not currently have extradition arrangements on a case-by-case basis, with prior approval from the chief executive before an application is submitted to the courts.

Hong Kong has agreements on extradition arrangements with 20 jurisdictions. The Chinese mainland, Macao and Taiwan are not among them.

The revision was triggered by a murder case in which a Hong Kong man, Chan Tong-kai, allegedly killed his pregnant girlfriend in Taiwan and then fled back to the city. The Taiwan authorities are unable to prosecute him as the two sides have no fugitive transfer arrangements.

During the meeting, Han also hailed the contribution of the Hong Kong Federation of Fujian Associations in promoting exchanges and cooperation between Hong Kong and the mainland, as well as its efforts in maintaining Hong Kong's prosperity and stability. He hoped that the organization can continue to firmly safeguard national sovereignty.