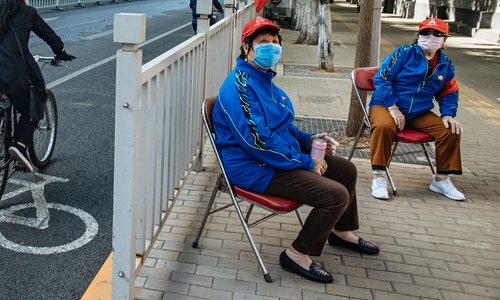 Two senior residents in blue uniforms and red arm bands, who are volunteers from the Dongcheng district of Beijing, are seen on sentry duty on the street on Monday, their first day of service. The Chinese capital is gearing up for this year's two sessions. (Photo: Global Times)

As thousands of deputies and political advisors from various walks of life around China gather this week for the postponed two sessions, Beijing has stepped up security management and maintains high alert in communities and public venues to prevent any sign of the epidemic's resurgence.

Beijing municipal officials vowed on Sunday that not a single mishap would occur during the seven-day two sessions. Departments are urged to act decisively in ensuring the safety of the capital city, and resolutely prevent and eliminate all possible risks. Beijing is still in "wartime" mode against the epidemic, officials stressed at a press conference.

To prevent National People's Congress (NPC) deputies and the Chinese People's Political Consultative Conference (CPPCC) National Committee members carrying the coronavirus from spreading it to the capital during the political gathering, they will have to take nucleic acid tests before leaving from other regions and again when reaching Beijing, as well as undergo a quarantine.

A CPPCC member from South China's Guangdong Province told the Global Times on Monday that "all CPPCC members in Guangdong were gathered together on Monday at noon to observe two days of quarantine before flying to Beijing for the two sessions on May 20."

"From Guangdong to Beijing, the journey will be under closed-loop management. We were told to prepare daily necessities beforehand as neighborhoods around the hotel where we stay in Beijing will be closed," the member said, adding they might also have to eat in their hotel rooms as well to keep certain social distances.

Some NPC deputies reached by the Global Times said that they will take chartered high-speed trains to Beijing, to reduce the risks of spreading or being infected with the virus.

While the capital city is cautiously welcoming these visitors, Beijing communities have raised their alertness this week.

"When entering and leaving a community, people will need to have their passes or health certificates checked and registered," an official from southern Beijing who asked not to be identified told the Global Times on Monday.

Beijing communities have never ceased closed management since the epidemic outbreak, and their efforts will be enhanced this week due to the two sessions, the official noted. More volunteers are joining the work with a focus on enhancing epidemic control, according to the official.

Beijing will check all inbound personnel and people returning from high- and medium-risk regions, officials said.

As the two sessions are coming, some people who returned from Hubei Province to Beijing said that their local communities are taking stricter measures, requiring them to get a negative nucleic acid test even after ending their 14-day quarantine before they are free to go.

Trains and vehicles that enter Beijing ahead of the two sessions are required to conduct security checks and temperature checks twice, according to traffic authorities from  Hangzhou, Nanning, and cities in Hebei Province.

Train stations are stepping up efforts to check for forbidden items such as knives, inflammable materials and explosive goods.

Zunyi, a city in Southwest China's Guizhou Province, for example, has told passengers to arrive at train stations at least one hour ahead of departure to prepare for security checks.

Besides,  delivery services in Beijing may be delayed as all packages entering the capital city will undergo extra security checks and real-name registrations are also required, the Global Times was told by deliverymen.

The local traffic authority will adopt traffic restrictions on the streets of downtown Beijing, and vehicles carrying dangerous or highly toxic chemicals will be banned from using the streets throughout the day.

The Beijing Emergency Management Bureau ordered gasoline stations stop sales of bulk oil, as well as firecrackers, from Monday till May 28, and security inspections will be held at chemical producing plants and pharmaceutical enterprises.

The Global Times saw in public venues - restaurants, markets, communities and outdoor scenic spots - body temperature checks and masks are a must for entry and some places require people to show health codes on their mobile phones.

"Our restaurant will separate desks for dine-in customers and take their body temperatures before their entry," said a staffer at Jindingxuan, a restaurant in the Tuanjiehu neighborhood of Beijing.

When checking into hotels in the capital, people will need to show their health codes and will be asked if they visited Hubei Province or a foreign nation during the past two weeks. Documents showing their health status and negative results for nucleic acid tests are required, a staffer at hotel chain ‎All Seasons told the Global Times.

Moreover, all sports and entertainment events, as well as flying ads and balloon casting, will be banned until May 28.