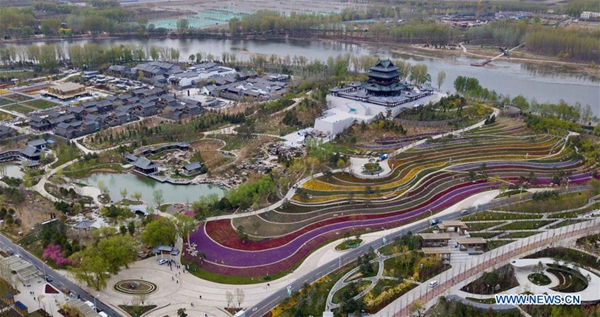 The upcoming 2019 Beijing International Horticultural Exhibition, the largest-ever expo of its kind, will leave an important legacy for the city, the country and the industry, head of the International Association of Horticultural Producers (AIPH) has said.

With an area of 503 hectares, the confirmed participation of over 100 countries and international organizations, and an estimated 16 million visitors, "the Beijing expo is by far the largest-ever horticultural event" and reflects the worldwide awareness of the needs to live greener, the AIPH President Bernard Oosterom said in a recent interview with Xinhua.

The event, to run from April 29 to Oct. 7 in Yangqing District in Beijing's northwest suburb, is an A1-category international horticultural exhibition accredited by AIPH and recognized by the Bureau of International Exhibition. The last time China hosted the top level horticultural expo was in 1999 in Kunming, a city some 2,700 km south of Beijing.

"I call it (the A1 event) an international 'melting pot' of knowledge and best practices. A country can host an A1 once in a decade. Apart from industry participants, there are also many cultural shows, educational experiences to attract visitors. It is really a 'city celebration' for six months," explained the head of the global association of growers.

More than a several-month event, the expo "is part of a philosophy, a long-term strategy about how to develop the country and specifically that region. It must be connected to the city government's longterm strategy. It must fit in everything with what the city wants for the long term," he stressed.

The AIPH team monitors the event's progress, working with the organizers to ensure the event complies with AIPH regulations. Recalling his several visits to the site of the event, Oosterom said he was really happy with the way China does the 2019 exhibition.

"We are happy with the progress of the site. Construction of the expo and supporting infrastructure has been completed. Installations of international exhibition progress well. Over 100 participants and over 100 non-official participants have been secured," he told Xinhua.

According to official data, more than 110 countries and international organizations, as well as over 120 non-official exhibitors, have confirmed participation.

"As a person who has acted almost all my life in the green business, I really like the way China uses this kind of event to transform their environment and also to show the importance of living green in urban environment," Oosterom said.

"China is one of the main important examples of countries where so many people are living in cities, and if you connect this to the worldwide awareness of the needs to live in a more 'green' environment, I think China shows the world how to do that, how to make decisions and how to implement," he added.

In the view of the AIPH chief, there are two important things about hosting the top-level expo. "Before everything starts you need city government and developers really understand the benefits of greens," he said. "Second, before you make plans of expo or any other big events you have to think about the post-expo, the legacy."

By the word "legacy", the president means the use of the infracture and regional development after the expo. "You need to think about this really carefully," he said.

"Beijing and China can use the expo infrastructure to build a new area where people can live, entrepreneurs can start company providing all kinds of citizens' needs. There hopefully will also be a new research center of how to grow green in that region," he said. "That will be an important legacy for the city, for the country and for the international industry."