CHINA Beijing kicks off massive vaccination drive, estimated to finish in May

Beijing kicks off massive vaccination drive, estimated to finish in May 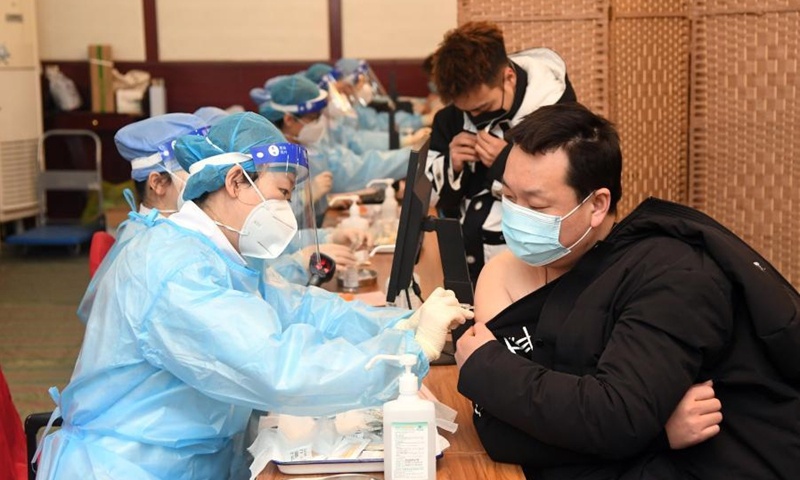 A medical worker inoculates a recipient with the second dose of COVID-19 vaccine at a temporary vaccination site in Haidian District of Beijing, capital of China, Jan. 31, 2021. (Photo: Xinhua)

Beijing has launched a massive COVID-19 vaccination campaign after it basically finished the inoculation of key groups around the Spring Festival holidays, with many districts expected to complete the drive in May.

Other districts including Fengtai, Shunyi, Fangshan and Miyun started their campaigns before the Spring Festival.

Xicheng authorities said they had opened 16 venues with 50 vaccination tables, where they expect to give 10,164 doses a day.

Fengtai said that it expected to administer about 10,000 doses every day at all of its 22 vaccination sites. Liu Wanying, the director of the Fengtai Center for Disease Control and Prevention, said the district will finish vaccination of the general public by the end of May.

Authorities in Tongzhou said that the district is likely to complete the campaign in mid-May. It has opened 17 venues where daily inoculations could reach 20,000 doses.

Media reported that as of January 16, China's capital city had inoculated 1.7 million residents and could vaccinate another 100,000 to 150,000 a day. The emergency inoculation program had administered two doses to 2.5 million people by about February 10.

Beijing has more than 20 million residents and 70-85 percent of them need to be vaccinated to achieve herd immunity, which would be 14 million people or more.

Experts estimated that the city now can inoculate at least 200,000 people a day and the capacity will further expand. It is very likely the city will finish the massive COVID-19 vaccination program in May with sufficient manpower and vaccines.

Jiang Chunlai, a professor from Jilin University's School of Life Sciences, told the Global Times on Thursday that to meet the target of massive vaccinations, more manpower will be assigned, and a stable and constant vaccine supply is guaranteed.

The public has accepted the massive vaccination drive, as more than 582,000 residents in Tongzhou registered to receive coronavirus vaccines after the Spring Festival holidays. About 504,000 of those people will get their first shots.

A worker at the Babei community in Beijing's Chaoyang district told the Global Times that the vaccination drive is open to people aged between 18 and 59, but there were some people above that age group who also wanted to get the vaccination.

Xia Lin, a Beijing resident, told the Global Times "My concerns over the safety of vaccines are easing because many friends had the shots and they experienced no major adverse effects, apart from feeling fatigue." Xia registered for the vaccine on Thursday.

Despite the Spring Festival holidays, inoculation venues in Beijing did not stop working, although fewer people came, media reported.