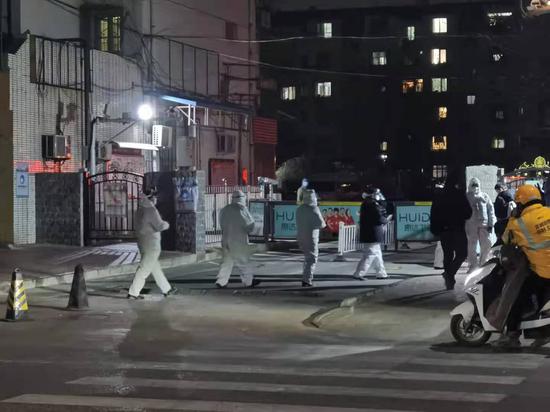 Medical workers walk into the Lianzhu Garden community for nucleic acid tests after a male resident was found to be an asymptomatic carrier. (Photo: Beijing Daily)

BEIJING, Dec. 24 (Xinhua) -- Beijing has conducted nucleic acid tests for all residents in the city's Lianzhu Garden community after a man living there was found to be an asymptomatic carrier of the novel coronavirus on Wednesday.

The government of Shunyi District said the community was immediately placed under closed management and its nearly 2,000 residents underwent nucleic acid testing and are waiting for the results.

All residents in the apartment building of the asymptomatic case have been asked to stay home and thorough disinfection is being carried out in the residential compound's public space.

The sweeping actions came after the city of Ningbo, east China's Zhejiang Province, reported that a resident of Beijing's Shunyi District was found to be an asymptomatic case after flying to Ningbo.

Officials said they are rushing to determine the source of the infection. The Chinese capital reported two confirmed COVID-19 cases on Dec. 18, both close contacts of an imported confirmed case, and did not report locally transmitted cases between Dec. 19 and Dec. 22.

Throat swab samples collected from the four family members living together with the asymptomatic case and environmental samples from their apartment have all turned out negative, authorities said.