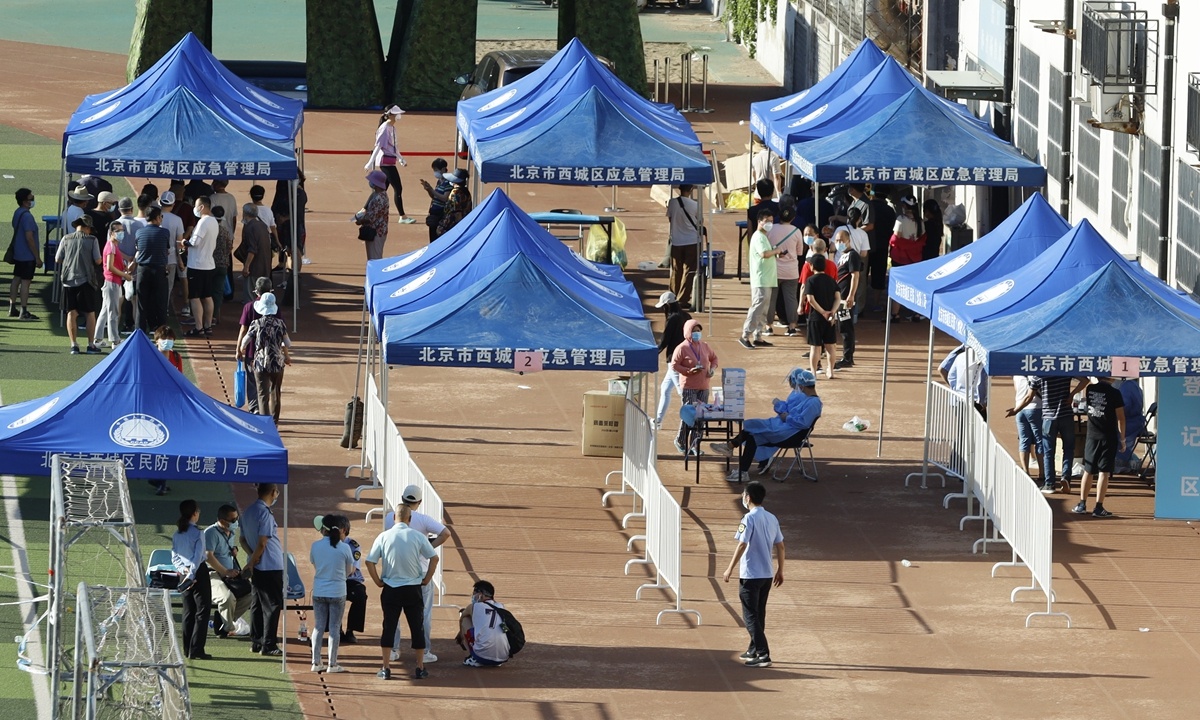 Residents follow a health worker to a testing station at a sports center in Xicheng district after Beijing municipal government demanded all residents who visited the Xinfadi food market since May 30 to undergo nucleic acid tests for possible infection with the novel coronavirus after the city reported 51 confirmed COVID-19 cases as of Sunday. Photo: Li Hao/GT

Beijing tested 76,499 people on Sunday for coronavirus and found 59 positive cases. In total, 79 new COVID-19 cases had been reported as of Monday, Beijing health authorities announced.

The situation has caused  some Beijing residents to worry about a new outbreak in the capital and sparking calls for citywide testing to detect all infected people.

However, experts reached by the Global Times on Monday said there is no need to test everyone in Beijing. Experts also tried to reassure the public, saying that the situation in Beijing is controllable and not a surprise, compared with the outbreak in Wuhan.

Beijing should improve its testing capacity but doesn't need to launch city-wide testing, Wang Peiyu, a deputy head of School of Public Health of Peking University, told the Global Times on Monday.

Nearly 200,000 people who had visited the Xinfadi Market, where recent clustered cases in Beijing occurred, since May 30, are under investigation and testing, Beijing authorities announced on Monday.

Wang explained that the infected cases found in recent days were largely concentrated near the Xinfadi Market, which means the infection has not spread across the city. Also, he said that the city has responded to the emergency in a timely and targeted manner, which could help curb any further outbreak.

Unlike the outbreak in Wuhan, which spread nationwide with more than 50,000 confirmed cases reported in the city alone, Beijing has so far only reported hundreds of cases in total and experienced a mild rebound, which is normal and in line with the epidemic's development, Wang noted, saying that Beijing's current measures against the rebound are reasonable.

Yang Zhanqiu, a deputy director of the pathogen biology department at Wuhan University, was optimistic about the positive testing rate in Beijing, where 59 out of more than 76,000 people tested positive for the novel coronavirus.

The positive rate in Wuhan's citywide screening was about 0.003 percent while that of Beijing's Sunday test was 0.07 percent.

But the results do indicate that the virus that's been spreading in Xinfadi is more infectious than the one in Wuhan, Yang noted.

Cost is also a factor that should be taken into account to decide whether Beijing needs to launch a city-wide test, experts said, noting that given the current epidemic situation in the capital, a city-wide test is unnecessary and would be a waste of resources.

A total of 300 asymptomatic patients were found after 9,899,828 residents were tested in Wuhan during a 10-day citywide test period from May 14, with no confirmed COVID-19 cases. The tests cost 900 million yuan ($126 million), which was shouldered by the Wuhan government, reports said.

Beijing's population was more than 21 million as of the end of 2019, according to the Xinhua News Agency.