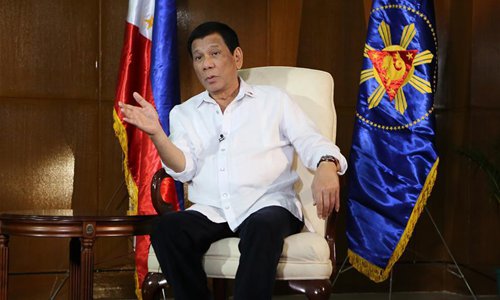 Philippine President Rodrigo Duterte speaks during an interview with Chinese media in Manila, the Philippines on November 2018. (Photo: Xinhua)

Under the global spotlight of whether the "honeymoon" of China-Philippine ties may come to an end, Philippine President Rodrigo Duterte kicks off his fifth official trip to China on Wednesday.

Experts reaffirmed Tuesday that such speculations are intended to disrupt bilateral ties, and China-Philippine relations are in no danger of going into a tailspin in the near future.

More importantly, they believe that the visit, amid China-US trade frictions, will focus more on economic cooperation and serve as an example to other Southeast Asian countries, showing that China will continue pushing forward cooperation under the Belt and Road Initiative and will never exclude other markets.

Duterte will visit China from Wednesday to Sunday at the invitation of President Xi Jinping.

Before his visit, Western and Philippine media outlets speculated that Duterte would likely apply pressure on China with the South China Sea arbitration ruling and that the China-Philippine honeymoon may be coming to an end.

Chinese analysts said Duterte faces mounting pressure to take a tougher line on China after a Philippine fishing boat sank following a collision with a Chinese vessel in the South China Sea, and he may have been politically pressured to raise the arbitration ruling. But China-Philippines relations have already been on the right track and whether he would raise the South China Sea issue or not will have no substantive impact on bilateral relations.

"China and the Philippines have not only reestablished close relations in the fields of economy, trade and people-to-people exchanges. The interaction between the two countries on the South China Sea issue has already entered the track of negotiation and cooperation," Chen Xiangmiao, a research fellow at the Hainan-based National Institute for the South China Sea, told the Global Times on Tuesday.

This was believed to be a sign that Duterte has put disputes aside and is seeking cooperation with China to benefit his country.

China and the Philippines released a joint statement in 2018, which said "both sides agree to exercise self-restraint in the conduct of activities in the South China Sea that would complicate or escalate disputes and affect peace and stability." The two leaders also signed 29 agreements and MOUs, including an MOU on oil and gas development cooperation.

Analysts noted that since Duterte became president, the Philippines' diplomatic focus on China has shifted from the South China Sea issue to economic and trade cooperation, as well as cultural exchanges.

Deeper economic cooperation would be this visit's top agenda as it is one of the essential external conditions to help him continue to keep the Philippine economy on the upswing.

For example, some breakthrough could be made in fishing cooperation. Although Duterte and Xi reached a verbal agreement during a meeting in 2016 that allowed the two countries access to fishing areas in each other's controlled waters, there has not been a written deal yet.

The Philippine Department of Finance said five agreements will be signed during Duterte's visit. The deals would cover trade, infrastructure development and border control, among others, Manila Times reported on August 13.

Though confronted with inflation and unemployment, the Philippines is still one of the fastest-growing economies in Southeast Asia. Infrastructure development has played a critical role in boosting its economic growth.

Philippine Trade and Industry Secretary Ramon Lopez said in an interview with the Xinhua News Agency in May that the Philippines gained "real and actual benefits" from joining the China-proposed Belt and Road Initiative.

Philippine Board of Investments data shows China topped the list of foreign investors in the Philippines in 2018 at 48.7 billion pesos (about $936 million) in investments.

Aside from participating in dozens of infrastructure projects, including high-speed trains, bridges, airports and dams, China has also provided millions of dollars in military assistance to the Philippine government to help fight terrorism and drugs.

Industrial cooperation would be Duterte's main task for this visit. Amid the ongoing trade frictions, Duterte hopes to attract more investment, especially those which withdrew from the Chinese market, Chen said.

"More cooperation will bring more benefits. This will serve as a model to other Southeast Asian countries to strengthen their ties with China, which also highlights China's commitment and role in safeguarding regional stability," Chen noted.

The trade war launched by the US against China has aggravated neighboring countries, especially those in Southeast Asia. They are concerned that this will force them to choose sides, and that the decoupling between China and the US will threaten ASEAN's core position in regional cooperation, said Zha Wen, an associate professor at the Institute of International Relations with the China Foreign Affairs University.

Southeast Asian countries generally hold a favorable attitude toward China's ongoing efforts to negotiate and resolve trade disputes with the US. During Duterte's visit, China should emphasize the inclusiveness of the Belt and Road cooperation and turn words into reality, Zha said.

"We hope that more infrastructure deals can be reached between the two countries during Duterte's upcoming visit to China," Yuan Xiaocong, deputy general manager of China Road and Bridge Corporation's branch office in the Philippines, told the Global Times on Tuesday.

The Duterte administration is currently pushing for the "Build, Build, Build" program, which fits into the Southeast Asian nation's need to upgrade its infrastructure and rev up its economy, as well as responds proactively to the China-proposed Belt and Road Initiative, said Yuan, noting more progress on infrastructure cooperation will also bring opportunities to Chinese companies eager to tap into the local market.