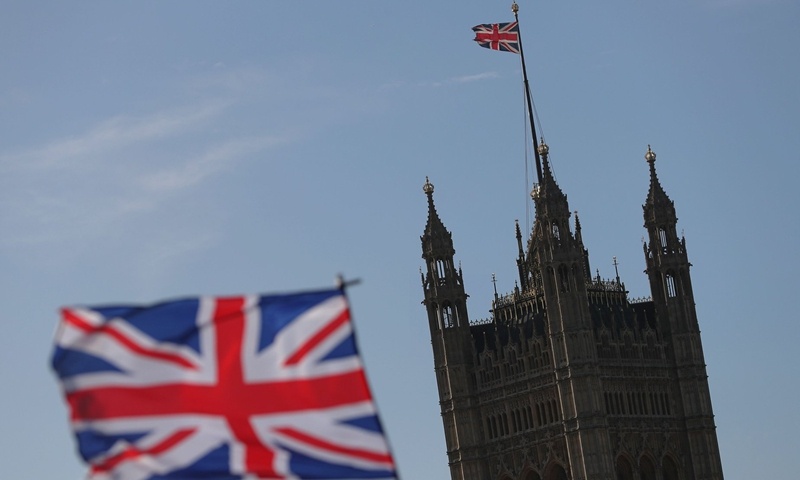 The British government has been urged to make a "smart choice" and not to burn bridges by continuing to provoke China on matters such as Hong Kong, Xinjiang, Huawei and the South China Sea, and dance to the tune of Americans. Otherwise, it will face severe consequences of souring UK-China ties, officials and observers warned.

Before US  Secretary of State Mike Pompeo's visit to the UK on Monday, UK Foreign Secretary Dominic Raab has been escalating his harsh rhetoric on China, announcing that the British government has suspended its extradition treaty with the Hong Kong Special Administrative Region (HKSAR).

In the face of escalating tensions not only with the UK but also with the US, retaliation is always the last choice for the Chinese government, some observers said. However, if the UK, as part of the Five Eyes, upholds such a hostile attitude toward China, Beijing may have no other choice but to strike at British companies like HSBC and Jaguar Land Rover in response to the sanctions imposed by 10 Downing Street, observers noted.

Such a move is seen as "symbolic," as the UK has parroted US' tone in rejection of China's recently passed national security law for Hong Kong. The UK's possible move is also dangerous as it is very likely to further undermine China-UK relations, particularly after the Huawei ban, which is widely believed to be a disastrous decision of taking China - the UK's most important business partner - as its enemy.

China is firmly opposed to Raab's remarks about suspending the extradition treaty with the HKSAR, urging the UK not to go further down the wrong path to avoid further damaging China-UK relations, Wang Wenbin, Chinese Foreign Ministry spokesperson, told a routine press conference on Monday.

The UK's recent misrepresentations and actions on Hong Kong affairs have ignored the fact that the national security law for Hong Kong has helped stabilize the "one country, two systems," and have seriously violated the basic norms of international law, which is also a blatant interference in China's internal affairs, Wang said.

Pompeo is scheduled to meet British Prime Minister Boris Johnson and Raab on Monday, to discuss the coronavirus outbreak, issues related to the HKSAR, as well as US-UK Free Trade Agreement negotiations, according to a statement on the US Department of State's website.

Britain followed the Trump administration's instructions in banning Huawei last week, even though it argued strongly that the decision had nothing to do with the US.

"This visit serves as a 'pep talk' for the UK, following London's rejection of Huawei and other matters," Wang Yiwei, director of the institute of international affairs at Renmin University of China in Beijing, told the Global Times on Monday.

Packed with the American hawks, the Trump administration has been launching a comprehensive suppression of China, and the UK seems to have been determined to follow the steps of the US, even at the cost of sacrificing UK-China relations, Wang noted.

Banning Huawei from its 5G network construction is considered a symbolic move, signaling that the UK might have taken China as potentially a hostile country. Chinese Ambassador to the UK Liu Xiaoming warned that the Johnson government will bear the consequences for politicizing business activities, which also hurt the country's reputation as an open economy.

Faced with a possible reaction from the UK on Hong Kong affair, Liu said in an interview with the BBC that Britain ending its extradition treaty with the HKSAR is wrong, and if the UK government goes as far as to impose sanctions on any individual in China, China will resolutely respond to it.

"I think the UK should have an independent foreign policy rather than to dance to the tune of the Americans, like what happened to Huawei," Liu said.

Options on the table

Some Chinese scholars said they do not believe China-UK relations would eventually evolve to a full-scale tit-for-tat situation, like intense China-US tensions. But it does not mean the Chinese government won't adopt necessary countermeasures to defend its legitimate rights.

"When former PM David Cameron met the Dalai Lama in 2012, UK-China ties had been hit hard, especially on the business side," Wang said, noting that China has plenty options of countermeasures on the table.

Forming strong business ties with China has already been a major focus of the UK in the post-Brexit era, not to mention in decades, experts noted. The UK has been the largest recipient of Chinese investment in Europe, and China has also been the UK's third-largest export destination after the US and Germany, according to industry analysis. Many British companies have been successfully expanding in the Chinese market, ranging from financial services to the pharmaceutical and automotive sectors, and brands like HSBC and Jaguar Land Rover are familiar with the Chinese public.

"We won't launch massive countermeasures at every major aspect of UK-China relations, as China still needs to evaluate the consequences. We will react in a reciprocal manner," Cui Hongjian, director of the Department of European Studies of China Institute of International Studies, told the Global Times on Monday.

The UK is going to pay the price for its further moves against China, observers said.

Documents obtained by the Global Times showed that the HSBC intentionally played a dirty trick by setting up a political trap for Huawei's senior executive Meng Wanzhou, and colluded with the US government. Given deteriorating China-UK ties, some observers forecast that the London-based bank may become the first target on the list of China's countermeasures.

Some Chinese netizens expressed outrage on Monday over the UK's stance on China related matters. One suggested that other British brands like Jaguar Land Rover and BP may face the same fate as how the Boris government treated Huawei.

"The UK government needs to rethink its decision on China-related issues. Gradually, the Chinese side may take comprehensive measures to fight back when necessary, touching on more aspects, including diplomacy, economy, culture and people-to-people exchanges," Cui said.